Back when Courtney Barnett made her big splash on the music scene in 2015 with the release of her debut album Sometimes I Sit And Think, And Sometimes I Just Sit, people were calling her this generation’s Bob Dylan. I’m five years too late to be answering a question nobody cared about in the first place, but I’m fifty years too late to have an opinion on Bob Dylan and that’s not stopped me. Besides, the question has been worming it’s way through my mind; I have a very strong idea of who Bob Dylan is and what Bob Dylan does, and Barnett’s music is so self-assured that comparing their two musical personae feels like a meaningful exercise. My first instinct is apparently the same as most people’s – that it’s an absurd and lazy comparison just grabbing one great lyricist whose sheer charisma overcoming limited vocal ability and bashing them next to another like a kid making her dolls kiss. In a lot of ways, I don’t think you could get two singer-songwriters with more different skills and artistic intentions. Dylan’s songs are, as beloved Soluter wallflower said in my first Dylan article, something separate from him. They are so abstract as to feel like they came in from another plane of existence; when asked how he wrote them, he initially said they always existed and he simply wrote them down. I think the one way he maintained the folk tradition was the expectation that people would go on to cover his songs, and they’re written in such a way that you can take them for yourself if you want.

Barnett’s skills are completely different. Her lyrics are viscerally literal, to the point where her lyrics sound ‘harder’ than Dylan’s – more staccato, more direct, more active. Even when she talks about her feelings, she’s never talking around them (“I wanna wash out my head with turpentine, cyanide/I dislike this internal diatribe when I try to catch your eye/I hate seeing you cry in the kitchen/I don’t know why it affects me like this/When you’re not even mine to consider.”). Part of the joy of Dylan’s lyrics is mashing the meanings of words together in ways that often just barely make any kind of grammatical sense in a way that describes things that have always existed but never had a name (“Ghosts of electricity howls through the bones of her face”). Part of the joy of Barnett’s lyrics is in the sound words make and the way those sounds connect, rhymes and half-rhymes and anti-rhymes. She sucks in specific, grounded details – I could imagine Dylan writing about a sad-sack small town, but I can’t imagine it sounding like “Depreston”, a real house filled with real objects. Her character studies like “Elevator Operator” are filled with the exact things someone she saw did and said, nothing more. If Dylan emerged from the fog, Barnett drove here from Preston.

And oddly enough, that’s what makes me think there is something to “Barnett is this generation’s Dylan”. If real life could be said to have a Theme, the theme of the 2010’s has been Identity. What are experiences a straight white man has that a black lesbian doesn’t, and vice versa? What is it that connects all trans women? What separates men and women? It’s not that these questions never existed before now, it’s that everyone has to think and talk about them basically all the time now, regardless of political beliefs or philosophical stance or personality. There’s something all black people have that I don’t; there’s something I share with all bisexual people that straight and gay people can’t have (random example: I often find other bisexual people tend to romanticise the idea of a bisexual male/female power couple too). Barnett’s lyrics are heavily rooted in her being a woman and an Australian and a hipster and a lesbian and born in 1987. If Dylan is giving us phrases, Barnett is giving us her experiences. Covering Bob Dylan seems logical, covering Courtney Barnett feels like taking something from her.

You could take the stance that the idea of an artist – the Icon of Elvis Presley and Cher and Alfred Hitchcock and Matt Groening – is a product of their environment. People at one particular time needed one particular Icon, so they created one by buying their records. People in the Sixties wanted someone to give them fundamental truths, so they created Bob Dylan. People in the New Tens wanted someone to create an identity, so they created Courtney Barnett. Barnett is this generation’s Bob Dylan because she is the latest iteration of an artist created by the time period she happened to reside in. From the sounds of it, she’s as frustrated by this expectation as Dylan was. I’m curious to see where she goes. 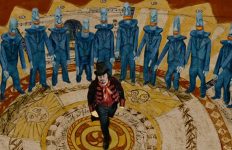 Drunk Napoleon Listens To Bob Dylan: Music To Kill A Man To→