“This whole time you were telling me how to run my life you didn’t know what you were talking about! You’re just an alcoholic with a great voice!”

A standard archetype in comedy is what’s known as either the Straight Man or the Comic Foil – that is, a character who exists to bounce off a more absurd character and put their silliness into sharp relief and often (though not always) getting off one-liners at their expense. Jerry Seinfeld of Seinfeld is one of the purest examples of this, acting as witness to the neuroticism of George Costanza, the bizarre thought processes of Cosmo Kramer, and the inexplicable behaviour of everyone else. In some ways, a Comic Foil acts as the arbiter of the story’s morality, defining what our expectations are supposed to be so that the absurd character can break them (with a snappy one-liner restoring the order). This can also risk making them a weak character; Jerry is also famous for being the least interesting character on his own show, which I think largely comes down to the fact that he’s largely a reactive character who never really instigates anything he can’t talk his way out of because his morality is exactly that of the show. His sense of right and wrong – of what is a ridiculous breach of the social order and what isn’t – is largely aligned with the show, so if you’re willing to buy into the premises of Seinfeld, your eye is drawn away from him and towards the other, much weirder characters. This is not a problem at all for Seinfeld, because its first, second, third, fourth, and fifth goal is being funny and it achieves that wildly, but it is a problem with any comedy that tries to tell a story (and more loosely any story that tries to be a moral tract). Which is why I find comedies about comic foils who degrade so interesting.

Michael Bluth of Arrested Development is probably the most famous example of this, at least in the circles I travel in. I wouldn’t go so far as to say that he’s the worst Bluth, but I do get where people are coming from when they say that – he’s often as impulsively selfish as anyone else in his family and has a fat dose of hypocrisy on top of it. He decries the lying, scheming, and laziness of the other Bluths, but as the show goes on, we see more and more incidents of him lying, scheming, and being lazy, even at the expense of people he ostensibly cares about like his son. In the micro, he’s a machine of great one-liners; in the macro, he’s as destructive as any other member of his family. My theory is that the writers did initially set out to write a morally upstanding counterpoint to the rest of the family, only for their comedic instincts to keep kicking in, and they just rolled with the final effect. This is a comic foil who degrades when the writers decide to make him the butt of the joke like anyone else – both observer of madness and participant in it.

There’s something similar but distinct going on with Ethan Siegal of the webcomic Shortpacked!. Much like Michael, he was created for witty one-liners (in this case, roasting what we would now call Hot Takes in the toy collector fandom) and ended up descending into hypocrisy because it was funny – one of my favourite strips is when he’s offered a management position if he has sex with the owner’s daughter, followed by a hard cut to him in bed with a smug look on his face. The first difference is that Ethan actually accepts responsibility for what he’s done and frequently changes both his self-image and his actions to reconcile the two and become someone who is neither hypocritical nor miserable with himself. The second difference is that the comic deliberately shows a much wider scope than Ethan; it almost takes glee in presenting people who can’t comprehend the joy he takes in his toys, cartoons, and philosophical analysis, as well as in having the other characters roast him and his foibles (“You know, people used to take me seriously before I was gay!” / “No they didn’t.”). The end result is that, unlike Michael, Ethan legitimately is always a nice dude doing his best, it’s just that what that means is always changing; a significant part of his character development comes when someone comes to him for advice and he admits that he’s come to learn he’s probably not the guy to turn to for this stuff. It’s degradation not so much of Ethan as it is the idea of a person he believed he should live up to – perhaps of the very concept of a Comic Foil itself.

The thing about the Comic Foil is that it is an impossible ideal. It’s impossible to live in the world without damaging it and without contradicting yourself and without looking the fool. Even Jerry is unbelievably weird when you look at him in a broader context than drinking coffee in a New York café; it’s bizarre that he’s so obsessed with social order when he’s so indifferent to what people actually think or feel (“We’re trying to make a civilisation here, George!”). The Comic Foil is ultimately a comforting story we tell ourselves, that we already know everything we need to know and can move through the world without being touched by it and without taking a wrong step. An observer has the benefit of witnessing other people’s mistakes and not feeling responsible for them – what’s wonderful, even intoxicating about storytelling is that we can witness all sorts of things and suffer no real consequences. Characters do not have that benefit; they’re forced to deal with what’s happening to them. A Comic Foil who degrades is a fundamentally compelling character, because they start with a superior, distant viewpoint and are forced to deal with the consequences. 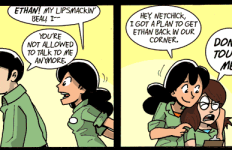