The body turned inside-out evokes fear of our exposure, our vulnerability.  The usual approach, in traditional horror films, has been to pile on the blood and guts to spell out a feeling of excess.  But what about taking the opposite strategy, showing a body that is all but emptied out, so we don’t see much of anything at all—the horror remaining largely invisible?  The film I will now discuss leaves it up to us to diagnose why a woman appears overly sensitive to her environment.

Let’s start with an important—but often glossed over film—that provides for Safe the groundwork: A Woman under the Influence (1974), written and directed by John Cassavetes.  The film scholar Ray Carney described Mabel Longhetti, a free-spirited, working-class housewife who has tremendous difficulty fitting into her environment, as “existentially missing in action.”  But this film is not a horror narrative, because Mabel exhibits a capacity for self-reflection that can make momentary sense of her chaotic world and therefore hold open the possibilities for social connection.

What makes Safe, conversely, a horror narrative is that Carol White, an upper-class suburban housewife, is also “missing” but lacks this psychic capacity.  At first it seems somewhat disconcerting to observe her passive responses to daily life.  Then, as this passivity becomes a vulnerability, her discomfort turns to pain that disrupts her own sense of a secure body.

There is no reason stated in the film for this, which subverts the Hollywood formula of explaining the problem that the character must overcome—and which defines him/her.  Since we do not know what Carol’s problem really is, she is distant to us, even when we observe her in intimate settings, such as her car, the bedroom.  Our identification with her pain pulls us out of our headspace and into hers, although these feelings are jarring to us.  We are compelled to identify the sources of stress in her life: routine dullness, endless commuting and errands, various forms of pollution, media white noise, fear of urban crime.  Could one, or more, or all of these sources have caused her physical breakdown?

Enter the scientific gaze: Carol is studied as if she were a specimen, her identity reduced to the sum of the data gathered from her responses to an allergy test.  Almost as easily as pushing buttons on a machine, the medical technician, during the test, reproduces her earlier bodily reactions.  Her pain, in this scene, is disturbingly real, but it seems rather strange to us that her environmental sensitivity no longer appears completely random, but somewhat predictable.

As Carol loses her place in her world, we wonder about her fate if she is no longer able to perform her social role.  Safe recalls The Stepford Wives (1975), for what is happening to Carol interferes with her programming to be perfect: to have an attractive appearance, a charming personality, please her husband, look after her son, and watch over the help tasked to keep the house in immaculate condition.

When she leaves her suburban home and her family to live in an isolated new-age retreat for persons like her, she appears to lose even more of her identity; she is no longer a wife and mother, but a visitor, the duration of whose stay is determined by when/if she gets “clear” (a reference to that highly controversial religion promoted by certain Hollywood stars).  A list of regulations and restrictions: silence during lunch and dinner–with the men on one side of the room, the women on the other, the banning of recreational drugs/alcohol, moderation in dress, restraint in sexual interaction, maintain a highly controlling/controlled environment.

The retreat leader’s charismatic presence eases Carol’s submission to his uncompromising doctrine that seems even more of a withdrawal from the world.  As he says, “The only person who can make you get sick is you.”  He instructs the visitors to purge themselves of their anger.  Under the guise of positive thinking, he fosters a mentality of self-absorption.

Conversational exchanges are stilted, awkward, brief: what we might expect hearing in a prison, asylum, or halfway house.  Again the film defies Hollywood conventions by giving us little information about what is going on at the retreat, forcing us to interpret external appearances and gestures, which quickly feel mechanical, as if they too lack any kind of significance.

This is a rather pressing matter, because we can find no reason for why Carol continues to get sicker.  She now looks paler, more tired, less expressive.  Close-ups reveal what looks like a lesion on her forehead. 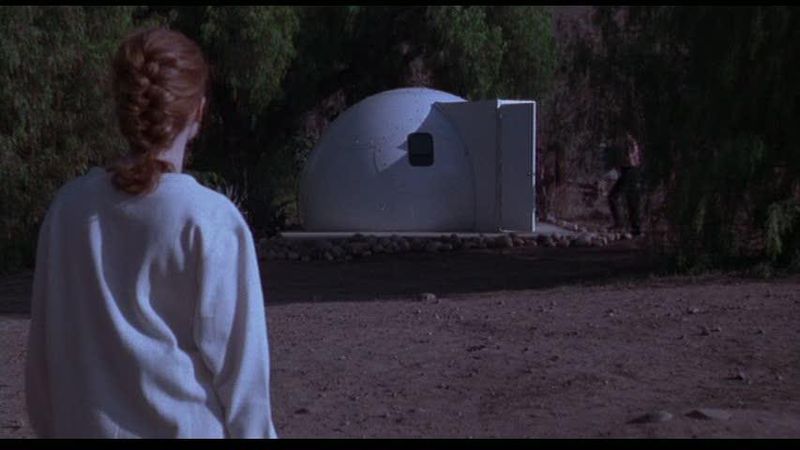 The sense of a self-fulfilling prophecy arrives with horrifying force in the last scene.  Displaying the artistic mastery of director Todd Haynes and actress Julianne Moore, who plays Carol, the minimal emotional tones resonate in the blankness and bleakness of Carol’s new world.  From inside a bubble-like, sanitized bunker, she looks into a mirror, then, in a reverse shot, directly at the camera, at us—as if something will finally be revealed.  We hear her say three times, “I love you.”  Blackout.

While Safe gains increased relevance when viewed post- 9/11 and after widespread recognition (though not as much, disturbingly, in the U.S.) of global warming, the date of its release suggests the depiction of a crisis that, while differing from terrorism or ecological destruction, would serve to further intensify their effects.  In the film, the drive for self-realization leads nowhere.  It becomes a false solution that further isolates Carol.

Sickness functions as a warning: faced with the pressures of living in a complex world, too often the instinct is to look for escape.  The retreat leader, who lives apart from the visitors in an over-sized mansion, has given up reading newspapers or watching the news on television.  He lives in conditions of privilege that not everyone globally can share.  We are reminded that, in the film, there is little difference between the upper-class suburb and new-age retreat.  As an academic colleague Stacy Alaimo points out in her book Bodily Natures, this parallels how the hired workers at Carol’s home are much more greatly exposed to toxic household cleaning agents than Carol is, yet little apparent concern is expressed about the possible dangers to their health.

What the film shows us is that blocking unsafe emotions, such as anger, will never allow us to be convinced that we are secure–because our feelings are rooted in bodily experiences that we often cannot control.  Safe turns this idea into a disturbing parable about the lack of understanding we have about ourselves.