“When will I see you again?”
“That’s the title of my favourite soul song of the Seventies.”
“What?”
“Nothing.”

One of Ruck Cohlchez‘s many frustrations with TV criticism today is a general sense that greater value is placed on intellect than emotion. I could quibble with specifics – I think a big chunk of the idea of Identity taking over criticism the past half a decade or so is rooted in a need for emotional validation, to be told ‘your feelings are fine’ – but I totally get what he means, because I know as much as I have valued emotion in the art I’m drawn to, it has tended to be in an unthinking fashion. I take in the emotion, I let it wash over me and take me over, and then when the movie or episode finishes, I let it go, and I focus on developing intellectual or philosophical ideas I picked up. I’ve been working on incorporating my emotional reaction into my thinking moreso recently, and I figured: why not take it all the way? Why not write an essay entirely about my emotional reaction to something? And there’s really no better subject for this topic than Quentin Tarantino’s Kill Bill.

I have a strong affection for stories that shoot for what I like to call ‘the ridiculous and the sublime’ – stories that aim to get you to have a strong and sincere emotional reaction to something that audience and storyteller alike understand is ridiculous or trashy or silly. It’s kind of a half-ironic attitude, as if “getting me invested in a story” were a game that we intentionally filled with obstacles. In Kill Bill, the main ‘obstacles’ are the incredibly trashy setting and incredibly trashy style, both of which blend individual trashy elements from hundreds, if not thousands of trashy movies and TV shows into a single potpourri of cultural detritus. The setting is a cartoon that just barely makes any sense (somehow, Beatrix manages to sit for thirteen straight hours in the car of the orderly she murdered without getting caught despite never leaving the hospital carpark), and the movie breaks style pretty much constantly, shifting from kung fu to western to Fifties melodrama at the drop of a hat and with every stylistic quirk you can imagine, from narration to title cards all the way up to turning into an anime for seven minutes.

What holds the whole thing together is a sincere emotional core. I have complained in the past about directors pushing a specific emotion on the viewer; that exact thing totally works on me here, partially because the overall emotional arc is totally unique, and partially because Tarantino has a precise sense of what cinematic devices have what effect on the viewer. One of my favourite sections in the film is when Beatrix meets Hattori Hanzo; the first half of the scene is some of the broadest, silliest comedy Tarantino has ever written or directed, shot almost entirely in Fincher-esque midshots. When Beatrix drops the bombshell that she knows he is Hattori Hanzo, Tarantino shifts the entire tone of the scene with the offscreen sound of him dropping his tools, and the first closeup of the scene. Things have become deadly serious. The whole movie is constructed around generating strong emotion from cinematic gestures this simple.

The scene after that, when Hanzo shows Beatrix his sword collection, is my favourite scene in the film because it’s the most concentrated form of what I love about it. Dramatically speaking, the only necessary action is that Beatrix convinces Hanzo to give her a sword (and in fact, he goes one step further and makes her a new one). Tarantino chooses to sacrifice dramatic speed to emphasise the intensity of emotion; Bea’s awe at being in his studio; Hanzo’s pride; his slow pondering of how he wants to react to Bea’s desire to, uh, murder Bill. It can be read as self-indulgent, but to me it’s knowing the difference between a fleeting emotion and an authentic, deeply held value. Just a scene ago, Hanzo was angry at Bald Guy, and that came and went pretty quickly; just because he was mad at that very second doesn’t mean he’ll always be mad at him. Hanzo’s emotion towards Bill is different – he might feel warmth or pride or anger or hate to Bill in any particular moment, but he’ll always come back to feeling that Bill needs to die, and it takes the time of writing Bill’s name on the window to process that, and Tarantino needs to use those cinematic tricks to sell us on that.

I believe, actually, that emotion is as much a structural element of Kill Bill as the chapter breaks. Beatrix’s need to, uh, assassinate Bill is something that keeps the movie from spinning off into random noodling (it’s established in the first scene and paid off in the last); it actually reminds me of key in song structure, with the eponymous feeling acting like the I chord. The harmony might get strange but we at least have a sense of home that we keep coming back to. The Hanzo scene actually ends up coming back in a similar way; all the characters treat his swords with the same awe and respect that Bea does, meaning Tarantino can get a big laugh out of the sentence “You hocked a Hattori Hanzo sword?!” – this is worldbuilding by collective shared emotional response, like a bunch of people who came together because they all liked the same cop show.

That’s what makes the pop culture references not just an obstacle that’s been overcome, but an essential part of the emotional affect. I have sometimes seen people complain that Tarantino relies on his references to provide meaning to his stories, which has always been a nonsensical criticism to me for three reasons: one, when I have gone back to watch the films he references, he often inverts the meaning or direction of what he nicks for his films. Secondly, and more importantly, even now, four years after first watching the film, I haven’t seen even one percent of what Tarantino is referencing in Kill Bill – I didn’t even know what David Carradine looked like! – and it still hit me hard emotionally.

I sometimes wonder how growing up watching The Simpsons affected me – all the obscure and adult references it made were things where the meaning may have flew by me, but the emotion was perfectly clear. It took me a while to find out who The Ramones were, but I could clearly tell from context that they were a rowdy anti-authoritarian bunch, and that this meant “Hey, I think they liked us!” was funny. It has taken me a long time to accept that most people don’t imbue their every action with a totemic significance; through Kill Bill, Tarantino shows me the world as I naturally see it, where every item and action is a reference to a long history that I was far too late to catch. I don’t know what movie is being referenced when Hanzo writes Bill’s name on a foggy window; I also don’t know what the precise nature of Hanzo’s relationship with Bill is. Feeling it is good enough for me.

The scene in which Beatrix finally gets her chance to, uh, kill Bill is, if not the most emotional I have gotten with a film, is one of the deepest emotional experiences I’ve had watching a film (the line “You’re not a bad person. You’re a terrific person. You’re my favourite person,” alone is Tarantino putting into words something I never even realised I needed to hear and often mentally revisit). The evolution of my reaction to Bill is, and always has been, totally unique, beginning with me totally hating him and letting that crumble with every additional second we spend time with him, until I’m left accepting that Bill must die (pounding so hard on the revenge button requires satisfaction) but weeping over that same fact – the first time I heard his monologue that opens the film, I thought he was being facetious, but now I read him as totally sincere.

Like many stories I like, this is a story about someone recognising themselves; like many stories I like, it’s a very strange and difficult path. The film ends with Beatrix not just reunited with her daughter, but left with a greater understanding of her own needs and wants, and how they might interact with each other – she is both a killer, and a mother. One value of stories is bringing emotions to the surface, where they can be isolated and studied (“so it can be determined what nutrients they have!”), and built upon in some real world way. If nothing else, Kill Bill has given me a language to articulate my emotions, a shorthand. There’s something I get from Kill Bill, and maybe I can get it somewhere else. 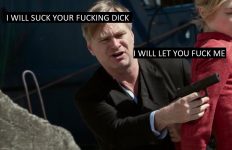 Taco Break: Gun To Their Head→