One of the more difficult things about writing about film is how to address the question of classification.  A film could be classified as both rooted in a particular decade (by virtue of its style and theme) and at the same time fit a specific genre—even if it pushes the bounds of that genre.

While, in many 1980s films, the element of horror (as psychological trauma) is heavily pronounced, it is best to begin by talking about the politics of this decade.  The first thing anyone would say about the 80s is that the ascendency of Ronald Reagan signaled a return to macho conservatism.  Reagan’s “joke” about bombing Russia, in August 1984, is not easily forgotten.

It is therefore no accident that the major film stars of the 80s (such as Stallone and Schwarzenegger) fit a certain idealization of masculinity.  But, at any point in the films that made them stars, it is clear that they are acting, or, to be perhaps more accurate, projecting, the fantasy of the white, male rugged individualist.

In this conservative era in Hollywood (as I have previously discussed in this series) there was, however, a reaction against such politics by deconstructing this hyper-masculine role—suggesting as we will see that the roots of hyper-masculinity are located in repressed trauma.   In the film I will now re-view, it is trauma of a horrifying nature.

“You Know Which Side of the Border You’re on?”: Paris, Texas

His starring role as Travis in Paris, Texas is understated at first, builds through the linear narrative of the film, and becomes at the end intensely horrifying.  Owing to Stanton’s ability to shape-shift between presence and non-presence in this film, he carries out the intentions of the writer of the film, Sam Shepard, to explore masculinity as a kind of nightmare from which the escape route is indeed narrow.  Shepard, who had in the same year a major role in The Right Stuff (1984), was a renowned American playwright with a knack for this kind of exploration.

Travis is a lost soul whose journey is set to the slide guitar of Ry Cooder.  As Wim Wenders explains in the Criterion DVD commentary track, the opening theme is Cooder’s reworking of the 1928 gospel-blues song, “Dark Was the Night – Cold Was the Ground” by Blind Willie Johnson.  It is crucial to point out that, like One From the Heart  (1982), Paris, Texas has a killer soundtrack that transcends the usual role of music in film as emotional guide and elevates such music into a register of revelation and dread.  Indeed, I never tire of mentally isolating from the rest of the film Cooder’s score in its stark beauty.  If I were hipper to this blog thing, I might be inclined to say stark-fucking-beauty.  The music sways and rolls: hypnotic, menacing, like the corroded power lines to a dead or dying city.  An elegy for a way of life played across six strings, sometimes accompanied by spare percussive effects and piano.  Cooder composed the score while watching the film, and he caught on to the way that the blankness of the desert landscape is not just a setting for an actor; its immensity has a psychological dimension.

Travis at the beginning does not speak at all.  As Stanton comments in an interview, included with the DVD, “He just doesn’t want to talk.  Everybody talks too much.”  Granted, there is a purity in silence, but it comes with a cost.  His failure to answer the question, “You know what side of the border you’re on?”, suggests a national amnesia at work, the forgetting of the imperialism that expanded U.S. borders.  Later, his conversation with the Chicana maid about his role as a father condenses the film’s argument that personal and political history cannot be neatly distinguished.

Shepard uses the West, as a multiply conflicted psychological and geographic territory, to turn the tables on hyper-masculinity.  Because of his own background (the biography on his website details his cowboy credentials), Shepard could devise an iconography that could equal Reagan’s—and far surpass that of 80s male action stars—which he uses to ground the film’s action in an authenticity that, as is made clear, is not immune from the ravages of time.

In his plays, Shepard’s examination of the male psyche undercuts pro-Vietnam-war jingoism and Reagan’s Morning in America.  Shepard is direct.  He moves lyrically in straight lines; these lines convey intense forces.  This allows Shepard to freely mix the fantastic, the real, and desires to embrace and/or run from both.

The title of the film denotes where Travis bought land; he tells Hunter, his young son, “I thought we might live there.”  Given the dream-like haze of Paris, Texas, for me, the absence of flashback scenes in the film is surprising.  I think Shepard and Wenders were on the same wavelength.  No need to play around with chronology.

Yet the same cannot be said for the film of Shepard’s play, A Fool For Love, directed by Robert Altman a year later in 1985.  The intensity of Shepard as lead is undercut by flashback scenes that represent the twisted past of a doomed romance.  Here Stanton plays the role of a ghostly old man, but looks too young (due to the need to find someone who could act convincingly as a younger person in the flashback scenes).  Besides, ghosts don’t really live in flashbacks. Stanton, as Travis, plays around with this idea so much more compellingly in Paris, Texas.

Once recovered from his desert exodus, Travis speaks.  Hank (Dean Stockwell), his brother, who has been out of contact with him for four years, takes care of him just as he has taken care of Hunter.  The conversations between the brothers seem to go nowhere, which may also be because, as Wenders remarks on the commentary track, Shepard had prior commitments and could not contribute as much to this part of the story line.

At Hank’s Los Angeles home, Travis watches home movies filmed by Hank when he and his wife visited Travis’s family in Texas.  The scenes, which we see, of Travis, Hunter, and Hunter’s mother, Jane, seem carefree.  But Travis exhibits a different reaction, although his understated emotions are here hard to read.

Travis goes back on the road with his son in search of Jane. The scene shifts to Houston, a modernized Western city and home base of George H.W. Bush, former CIA head, Reagan’s VP, and successor to Reagan in 1989.  Just like the desert spoke through Travis, projecting a feeling of blankness, Houston speaks power.  But rather than a sense of political conspiracy, we see how repression becomes a catalyst for emotional blackmail that is often self-directed.

When Travis tracks down Jane, it is clear that he knows her, or parts of her—that is to say, there is not some information about her he has forgotten; rather, what he knows is being repressed so he doesn’t have to feel it.  This theme is writ large in the 80s; it is an aesthetic of anesthesia (in, as I previously have discussed, the high-concept style that permeated this decade).  Jane is a sex worker at an adult club.  Travis arranges to be her customer.  The encounter is conducted through a one-way mirror (Travis can see her, but she can’t see him), their conversation via telephone.  Travis is blocked: their first meeting is a series of conversational openings that, interrupted, hang in the air.

Jane is played by Nastassja Kinski, who, like Stanton, appeared in One from the Heart (1982). She proposed in an interview, included with the DVD, that Jane “may have tried to understand Travis, to get through to him through other men . . . She guided herself to that town and that place to do what she would do.”

In the second meeting, Travis recites a lengthy monologue.  Make no mistake, there is a surrealism here, an atmosphere lit by blue light and charged by heated passion, that might have come from the mind of David Lynch.  Yet Shepard, as writer of this monologue, is far more direct. The monologue tells us all. It is a history of Travis’s abuse (of an imaginatively cruel nature) that results one day in Jane’s gaining a terrible revenge that breaks him and sends him running.  Of course, love is invoked throughout.  In the logic of abuse, it always is.

We are forced to ask the question: do we feel sympathy for Travis knowing what he has admitted to us, to himself, to Jane?  The brilliance of Paris, Texas resonates in the moment where evil is human, not supernatural.  Travis, we know, is human, but we wonder if he really knows “which side of the border [he is] on.”  This is what I call horror. 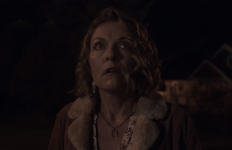 And Then I Woke Up: Twin Peaks→ 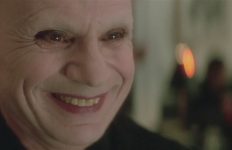 Year of the Month: Jake Gittes on Lost Highway→ 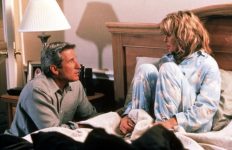 What the F? Babalugats on DR. T & THE WOMEN→