Die Hard is a perfect movie.  “Perfect” does not equal “great,” although it’s that too; a perfect movie is one in which every element contributes towards the whole, where every element is necessary and can’t be changed without damaging that whole.  Perfect movies result not just from artistic inspiration but a dedication to the craft of filmmaking, on all levels:  producing, writing, acting, directing, shooting, editing, scoring.  Since Die Hard’s perfection reveals itself in every scene, well, why not start with the very first one, literally all we see until the title appears on screen?

Start with what may be most important to the film:  what this scene is not.  This is not a scene of action or violence, and apparently director John McTiernan had to campaign for that.  Action movies in the 1980s often started off with a scene of killing, usually a setup to the larger plot.  It came off almost as assurance to the audience–don’t worry, people will be killed here in cool ways, you didn’t waste your money.  Joel Silver produced Die Hard, along with many many other of the most profitable 80s movies, and Quentin Tarantino described this kind of opening well: “some guys pow pow pow kill some people and then you see Arnold Schwarzenegger.”  (I don’t want to slam Silver, though, because he contributed one of the best details in the film:  Takagi’s internment during WW2, a quick, elegant bit of character shading.)  Given Die Hard’s heist plot, it would have been easy to start with an action scene, maybe killing a guard to get a Man on the Inside.  Instead, McTiernan and screenwriters Jeb Stuart and Steven deSouza delay the first gunshot for over 18 minutes, using the time to carefully layer in details of plot, character, and setting, and to gracefully ramp the tension.

The opening comes from Roderick Thorp’s source novel Nothing Lasts Forever, although we actually come in to the story a few minutes before Thorp does.  Very little happens:  John McClane (as yet unnamed) learns “the secret to surviving air travel. . .you take off your shoes and socks and walk around barefoot and make fists with your toes” and gets off a plane.  Yet we get a substantial amount of information and a key plot point in these first ninety seconds:

Screenwriting is a unique craft, and different from other forms of writing, in that it’s much more about image and action than words.  When we think of writing, we will still usually think of words in print, where there are literally no images or action, only what we can imagine.  Screenwriting works the opposite way:  we’re going to see things that don’t need words at all to describe them.  This opening serves as a model of screenwriting, and there’s really only one memorable line; great screenwriting isn’t always about great dialogue.  On the above list, note how 1 through 4 are all conveyed or hinted at without exposition.  We hear 1. over the plane’s PA; McClane states 2. but it’s provoked by a shot of his gun and the passenger (Robert Lesser) seeing it–there’s no moment of “hey did I mention I’m a cop?”  3. comes up in conversation but it’s set up by the second shot of the film, Willis gripping the handrest and 4. requires no words:  we get it entirely through McClane carrying the gigantic stuffed teddy bear.

5., of course, becomes a key detail later in the film, and speaks again to Die Hard’s understanding of what makes a great action movie.  McClane spends the entire action part of this action movie barefoot.  That pays off in some good jokes (“a million terrorists in the world and I gotta kill one with feet smaller than my sister’s”), some good visuals, some good tactics on the part of Team Hans Gruber (“shoot the glass!”) but most all, it pays off by weakening McClane.

In a good story, heroes are not defined by their strength; they’re defined by weaknesses that they have to overcome.  We have to see them overcoming as part of their journey.  Sadly, most action movies (including just about every Die Hard sequel) have forgotten this; they are not stories but spectacles of Good Strength defeating Evil Weakness.  That’s a problem on two levels:  we know how it’s going to come out, and without a steady diet of steroids, it’s hard to identify with the level of strength most action stars display.  Part of what makes Die Hard so affecting is the way McClane comes across as genuinely vulnerable, with the bare feet as his weakest point.  It forces him to improvise new actions (like bandaging them) and it further forces our empathy with him.  When he comes out for the final shootout (“HAAAAAAAAAANS”), he looks like he can barely stand, and that makes things moving and exciting. 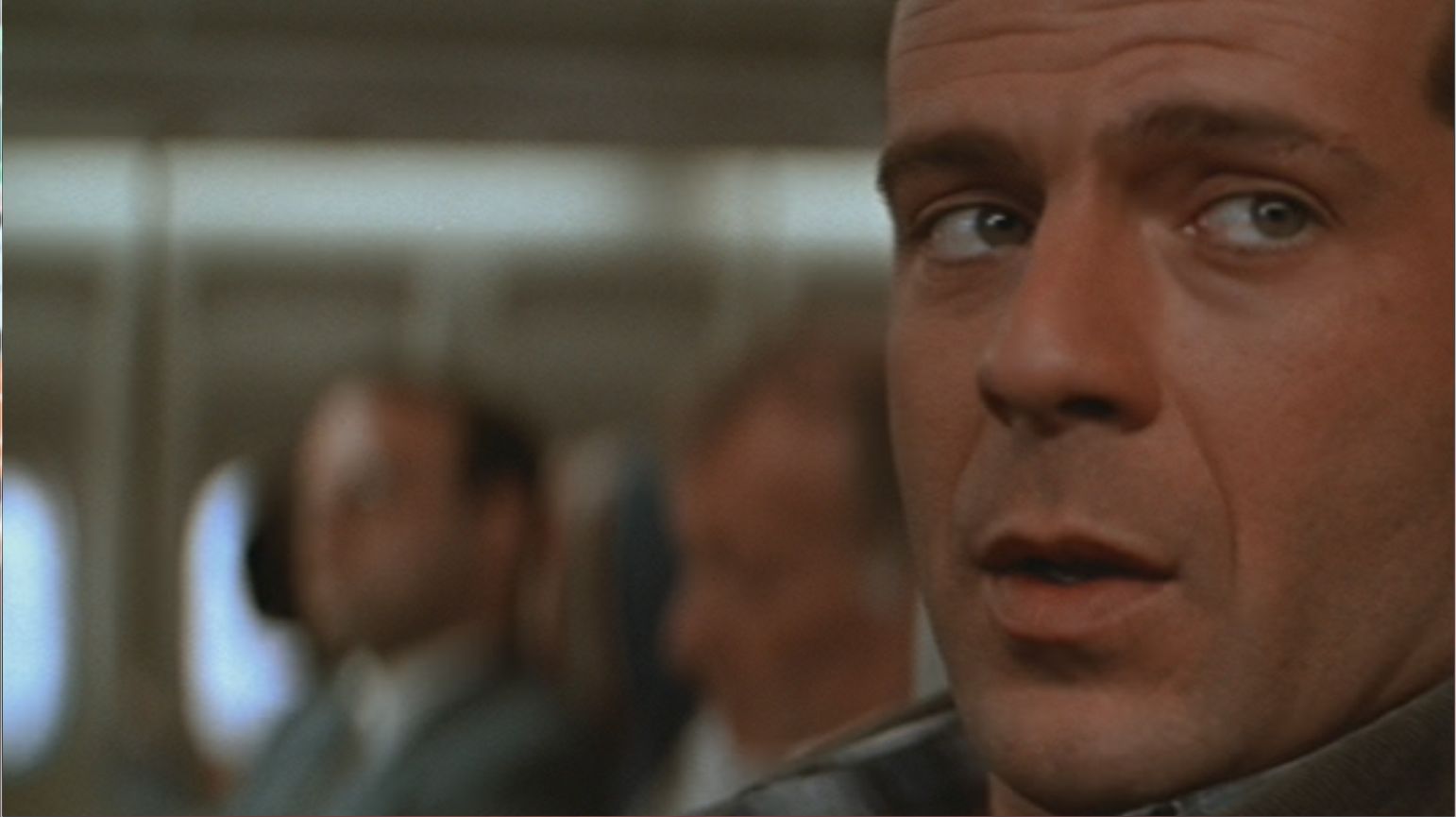 That weakness isn’t just set up by the bare feet; it’s there in Willis’ performance, and right away.  As the camera pulls back, we get our first shot of him and he’s got the now-classic Willis smirk in place, the kind of look he gives when he’s not acting and truly doesn’t give a shit about the film.  When McTiernan cuts to him (the first cut in the scene), though, he’s slack-mouthed and looks a little stupid, and the smirk doesn’t come back unless McClane brings it.  (I wonder if this was a deliberate nod to Willis’ smartass character on Moonlighting.)  This is most definitely not the image of someone who’s going to take out twelve terrorists armed only with a handgun.  Starting here, Die Hard does something so rare in contemporary action movies:  McClane actually comes across as the weaker side in the battle.  For further evidence, contrast that moment with our first shot of Hans Motherfucking Gruber, all professional potential ownage. 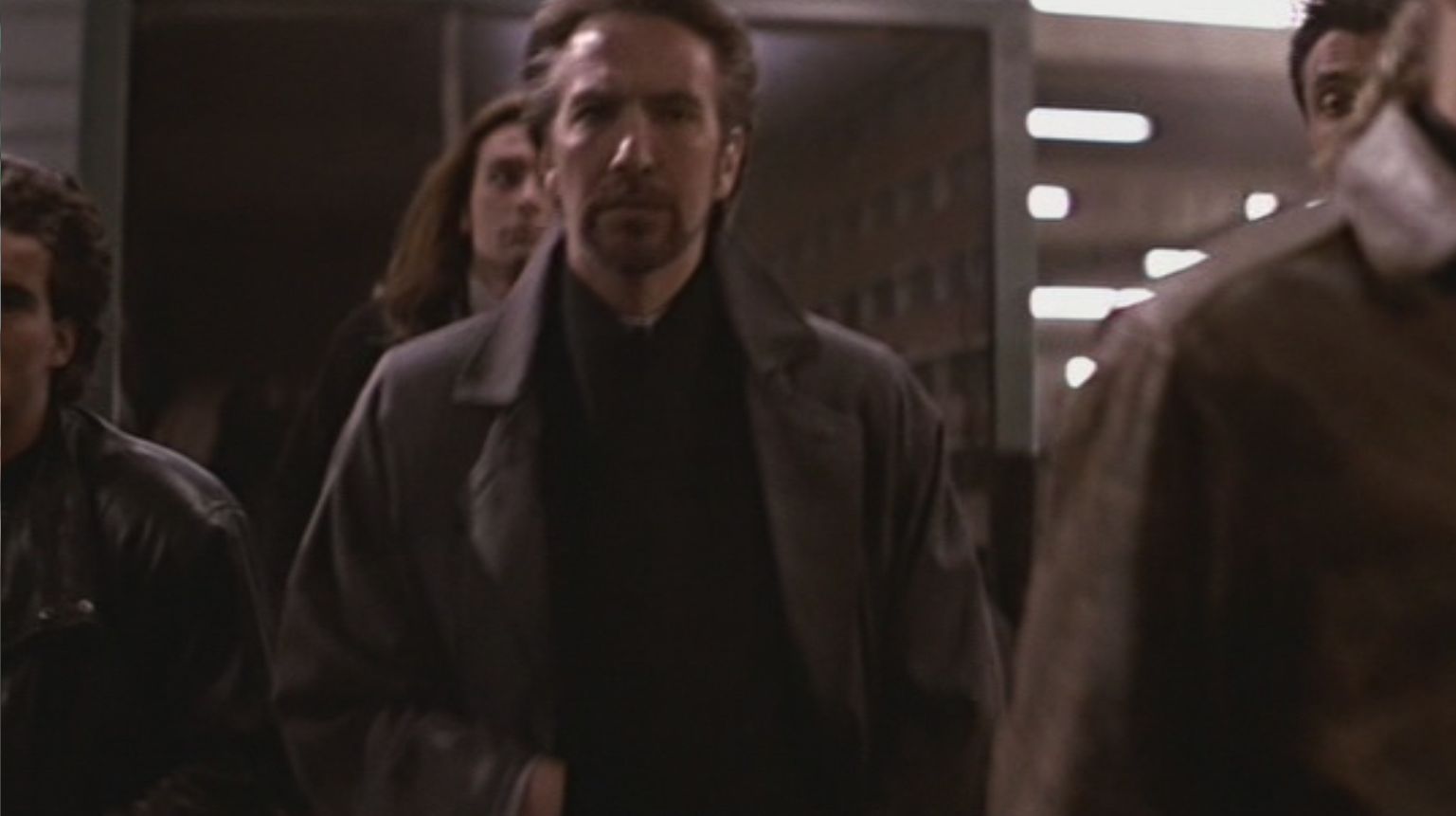 The opening scene also sets up two running jokes throughout the film.  First, John McClane doesn’t belong here, a scruffy, working-class New Yorker running through a corporate Los Angeles maze.  (This theme will be hit even harder at the Nakatomi party.)  McClane’s clothes, accent (“fists wid yer toes”), demeanor, all mark him as different from Lesser.  Marilyn Vance-Straker’s wardrobe choices for Willis and Lesser are both perfect.  Willis’ plaid and jacket look like the everyday clothing of a New York man in December:  he’s layering, and of course those layers will get stripped away in the rest of the film.  Here, already, those clothes set him apart.  They also reinforce a line later, when Holly says how quickly he came to L. A; it does look like McClane just threw on whatever clothes were lying around.  (He probably bought the teddy bear in the airport gift shop.)  Lesser’s outfit isn’t the sleek Eurogroomed look of Team Gruber, or even of Nakatomi’s people, but we see that he’s a guy comfortable in a suit, on airplanes, and talking to strangers.  McClane is none of these things and we see that right away.  Even the moment with the teddy bear, trying to maneuver himself through the aisle, sets up what’s coming.

The second running joke starts in that aisle, as McClane tries to get around a stewardess (Stella Hall) and has a beat of eye contact. McClane keeps seeing women all through Die Hard, and the kind of model-perfect women that you expect in a 1980s film, especially one produced by Joel Silver.  McTiernan and screenwriters were smart enough to never turn this into a plot point–it’s never anything decisive or distracting, just a continual reoccurring reminder that McClane is somewhere he shouldn’t be, a Hill Street Blues character who’s somehow stumbled into a Jaguar commercial, with a shot at Nakatomi that makes that almost literal.  (I first visited West L. A. about a year before Die Hard was released and that’s what it felt like to me.)  Also, this runner reminds us that McClane is very much an old-school chunk of masculine who would never not look at a woman.  That plays into what is a plot point:  Holly not using the McClane name any more.

By the way, if you’re wondering if the stewardess was supposed to be flirting with McClane, here’s the dialogue from the deleted portion of the scene:

Stewardess:  (looking at teddy bear) You should’ve gotten her a seat.
McClane:  Her?  She’s underage.
Stewardess:  I’m not.

I’m glad that got cut; it plays better as an ambiguous moment, with the look matching McClane’s clumsiness in trying to get around her.  Die Hard doesn’t waste a moment and dialogue would have slowed everything down; McTiernan also deleted a moment in the jetway where Lesser sees McClane and repeats the fists-with-your-toes idea, just to make sure we all get it.  Talking to the stewardess also sets up the wrong pattern from what’s to come, because McClane sees all the women but never interacts with them, and they certainly aren’t hitting on him.  Also, eew.

This scene also shows how McTiernan and cinematographer Jan de Bont will shoot the rest of the film.  The first shot of the plane landing looks dirty but also has the right orange/yellow of a December afternoon in Southern California.  De Bont and McTiernan will use that lighting throughout the first part of the film, making an artificial background for the Nakatomi scenes so they could control the light and color.  It conveys a sense of time passing, and therefore of counting down for the opening act.  The second shot of the film shows something that we’ll keep seeing:  McTiernan almost never cuts when he can pan instead.  He starts with an extreme close-up of Willis’ hand (with the title BRUCE WILLIS over it), then pans up, then pulls back.  That kind of smooth camerawork will continue all through the film, as will the camera moving through three points.  McTiernan notes in the commentary that de Bont’s European background meant that he was comfortable with doing camera moves that an American cinematographer would consider unnecessary.  De Bont’s work here gives Die Hard both elegance and energy, and right away; as an action movie, the camerawork here is so much more compelling than the Simpson/Bruckheimer/Bay style of More Flash! More Edits!  And as a final touch, Michael Kamen contributes the first notes of his excellent and underrated score:  sleigh bells chiming (and they’ll be back for one of the climaxes) as McClane gets off the plane and we go into the title.

That’s the first ninety seconds.  It gets better from here.