For about a month, I’ve been sitting on some news about Steven Soderbergh’s uber-triumphant return to theater screens, Logan Lucky. Said news involved him being interviewed by Entertainment Weekly about the film and its major studio-bypassing distribution method, with Soderbergh creating his own distribution company, Fingerprint Releasing, to work with Bleecker Street to release this film (since that interview, Fingerprint has signed a first-look deal with Amazon for them to be the streaming host of this and future Fingerprint productions). Plus, I heard a rumor that the film’s totally unknown writer, “Rebecca Blunt”, is actually a pseudonym for Soderbergh’s wife and E! personality/YA writer Jules Asner. But that shit’s technical. Now we have in our hands an honest-to-god trailer, and oh, it’s a doozy on every level. Strap in and make sure you’re well-versed about the Twitters, all of ’em.

Towards the tail end of Soderbergh’s involvement with the studio system, trailers stopped being his friend (not that they were always his friend before, as evidenced by the garbage trailers Fox put out for Solaris). They were either hilariously overwrought (Side Effects, Contagion) or just plain selling a different, worse movie than the one Soderbergh delivered (Magic Mike), and I can assume they may have made Soderbergh sure of his decision to get out the door. And now that Soderbergh has presumably gotten complete (or something close to it) control of marketing, we reap the benefits, because wowee, this is even better than I could have dreamed.

The plot of Logan Lucky involves the Logan brothers (Channing Tatum and Adam Driver), two down-on-their-luck Southern boys who, along with their sister (the wonderful Riley Keough, previously of Magic Mike and the Girlfriend Experience TV show), plan a robbery of the Charlotte Motor Speedway during the Coca-Cola 600 race. The trailer spends most of its time chronicling the heist and the team the Logans assemble to help them carry it out, including Daniel Craig as imprisoned demolitions expert Joe Bang (with Joel Edgerton’s Loving haircut and a ripe Southern accent), Jack Quaid and Brian Gleeson as his brothers (they’re the two guys in the aforementioned “all the Twitters” bit), and presumably also a legitimately unrecognizable Seth MacFarlane as some fuckface who gets in a bar fight with the brothers (over Driver only having one arm). We don’t get much at all of the other cast, which include Hilary Swank as the Andy Garcia character, Katie Holmes as Tatum’s ex-wife, and Katherine Waterston as… someone (someone with Waterston’s Alien: Covenant haircut).

Much of the talk about Logan Lucky has been in relation to the Ocean’s films (why, the trailer even starts by mentioning them), and the trailer certainly seems to validate that comparison, as this looks like the most purely goofball movie Soderbergh has made since Ocean’s Thirteen. The cast seems to be having a competition as to who can do the most ridiculous Southern accent (Craig wins, but MacFarlane gives him some competition) and there’s some wonderfully broad dumb-guy gags (“all the Twitters” is the obvious winner, but I also love Tatum’s Ulysses Everett McGill-esque description of getting fired and the Wile E. Coyote triple take Tatum and Driver do when Craig runs away from the tube). It’s all very funny and light, and it looks like a blast on that level alone. And there’s still a more important level to go.

Very interestingly, Soderbergh doesn’t seem to be straining to recapture the filmmaking of those movies, as most of the shots in the trailer are Soderbergh’s patented clean, digital tableaux, with only a little bit to suggest the more energetic direction/cinematography of the Ocean’s series (mostly involving the tube system which is the focus of the heist). It seems Magic Mike XXL was almost a testing ground for how to meld that style, which often gets hit with complaints of being too clinical, with sillier gags and sequences. Why, there’s even Southern convenience store mayhem in this one too!

It’s hard to gush any more about the trailer without showing some receipts, so I’m just going to post some particularly Soderberghian screenshots. The trailer wastes no time getting to the Peter Andrews of it all, opening with this gorgeous little shot reminiscent of, of all goddamn things, The Good German. 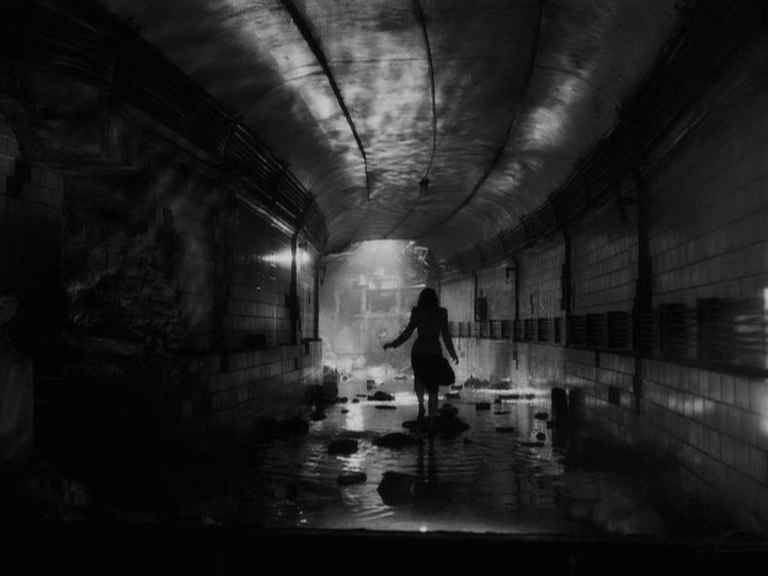 The economic malaise that powers the Magic Mike duo, Side Effects, The Girlfriend Experience, and Bubble is present here too, with the benevolent-seeming but cruelly-acting agent of the market played here by Jim O’Heir (having previously been played to perfection by Betsy Brandt).

This shot is secretly the best thing in the trailer, because it so perfectly, fussily centers and aligns the divider in the jumpsuit and the crack in the door that my brain keeps mistaking it for a weird split-screen each time I watch the trailer.

The trailer, in between the hijinks and explanations, finds time to fit in some Soderberghian playing with focus…

…and one of the object shots that wallflower so eloquently wrote about.

Logan Lucky opens August 18, and is rated PG-13 for “language and some crude comments”, which leaves enough leeway to suggest that there will be a word-for-word recreation of Dr. Korchek’s letter to Attractive Woman #2 in it. And stay tuned to this site for assorted Soderbergh content in the lead-up to its release, including that Nicky Katt thing I swear I was going to post before this.