In his second feature film, Richard Ayoade confidently mashes up his influences.  The Double, adapted from the Dostoevsky novella of the same name, calls to mind the work of more than a few directors and authors. Thankfully, Ayoade makes it clear that he’s more than just a mimic, as he brings a very sure hand to the direction of the film.

With his ‘neurotic’ and ‘awkward’ dials turned up to eleven, Jesse Eisenberg plays Simon James, a low-level employee at a soul-sucking corporation that will feel especially familiar to fans of Terry Gilliam’s Brazil and the Coen Brothers’ Hudsucker Proxy.  The highlight of Simon’s day is spying on his beautiful neighbor Hannah (Mia Wasikowska) – though of course, todayis different.  He catches sight of a man watching him back from the outside of Hannah’s building.  The two exchange a friendly wave just before the man plunges to his death.

But this is just the beginning of Simon’s problems, as soon his boss introduces the company to a new employee named James Simon who is his exact double (also played by Eisenberg, obviously).  The main difference is that where Simon James is constantly and aggravatingly befuddled, James Simon is confident, likeable, and assertive.  From here, the film dives gleefully into its unique-yet-familiar brand of weirdness that calls to mind equal parts Terry Gilliam (as mentioned), David Lynch, Franz Kafka, the Coen brothers.  Simon’s small, cramped cubicle even looks like it would be right at home inThe Ministry of Truth, right next door to Winston Smith.

In the original novella, the existence of Simon’s double is result of his madness – not so in Ayoade’s adaptation.  Simon desperately asks a coworker if the new employee, James, reminds him of anyone.  He offhandedly agrees that, sure, they look exactly alike.  Later on, after Simon manages a rare moment of angry confidence, another character mistakes him for James Simon.  No, the doppelganger is real, but Simon himself is so forgettable that no one seems to care.  This is par for the course in Simon’s world – he’s brushed off, forgotten, and subjected to maddening bureaucratic logic at every turn.

The main plotline subverted a few of my expectations, though I was underwhelmed some by the ending once the film started exploring how this doppelganger situation actually works (ugh, mirrored injuries).  But for the majority of its runtime, The Double actively delighted me.  Ayoade has an eye for striking images, and Eisenberg does wonderful work in his dual roles, playing both to and against his historical type.  Wasikowska’s character also manages to avoid landing in MPDG territory, though there are certainly hints of the trope in her interaction with Simon.

Most of all though, I was taken in by the exceptional atmosphere and setting of the film.  Ayoade shows near Wes Anderson-levels of meticulousness in the set design.  Everything we see fits perfectly into the world of the film.  The setting is intentionally vague – we are given no markers to orient ourselves in time or geography.  This world might as well consist of Simon and Hannah’s apartment buildings, the subway, and their grungy office building.  Every machine and computer has analog parts that whirr and rattle, and everything possesses a kind of fetishized vintage feel that exists outside of any specific decade.  There is an overwhelming feeling of otherness, almost like the eponymous city from Alex Proyas’ Dark City.

The Double is an impressive, confident film from a promising director.  If you aren’t bothered by more than superficial similarities to films and novels by the likes of Gilliam, Kafka, Lynch, and many others, it’s a very enjoyable 93 minutes spent in a world of stifling bureaucracy and confounding technology. 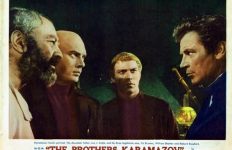 A one-legged stool: THE BROTHERS KARAMAZOV (Year of the Month)→