“I have a bleak outlook on life. But I know I can handle it.”

“Let me forget about today until tomorrow.”

I finished watching The Sopranos for the first and probably only time six months ago. Every story I immerse myself in seems to transform me into a character within it, and that six months has become the final step into my becoming a Sopranos character, in that I find myself thinking fondly back on a time that I know for a fact wasn’t all that great – I found the show fascinating and I learned a lot from it, but I didn’t enjoy the process of watching it at all. It was a homework story, something I watched out of obligation of Having Seen A Classic. I was horrified (and worse, bored) by the show’s genuine contempt for, well, everything; whether you’re a Mob boss with a violent stranglehold on your local area, a teenager trying to make sense of the world, or an upper-middle-class dentist, you are a terrible person who makes the world a worse place to live in. This is an attitude I don’t share and find quite exhausting and irritating to spend an hour in, let alone six seasons. But I’ve come to admire the show’s dedication to that mood in retrospect. Quite aside from the perverse admiration of watching someone stick to their guns for a truly unreasonable amount of time, I feel like the show actually came to terms with its bleakness at the end. As if it’s saying that life is not worth living, and that every day is suffering, and I’m gonna keep on going anyway if only out of spiteful habit and a real fear of death.

Whenever I find yet another person who seems to run on malice, on a complete contempt for almost everything, I find myself thinking of The Sopranos. Art in general, if not storytelling specifically, gives us language, mental shortcuts, pre-existing emotional states, and words or images for concepts and feelings. The Sopranos as a whole has become a shorthand to me for people who project their own feelings onto the universe as a whole, who act as if the things that make them angry make God angry too. When I recognise their behaviour, I feel irritation and boredom, but also pity; living life with your nose perpetually wrinkled in disgust is an awful, tedious experience based on this show. The flipside is that real life and real people tend to be less oppressively closed off than fiction; very few people reduce themselves to the husk David Chase does via this show, and I’m often surprised and delighted not just by the joy these Sopranos People can find in the world, but by their willingness to compromise, as if they’re taking a step back from being Pure Sopranos just for me.

If that’s what the whole show represents to me, did it generate any language on a more individual, episode-by-episode scene-by-scene moment-by-moment basis? You could almost see the show as a machine constantly generating new language, new ways of expressing that Sopranos moral outlook; from this perspective, I think the way I took Tony Soprano himself is the way David Chase hoped I would, even if I don’t loathe him the right amount. I find myself thinking of Tony any time I impulsively act on my short-term instincts (specific example: any time I grab some chocolate or something for a snack, I end up thinking of his ice cream sundaes). As beloved commentor and occasional Solute contributor Conor Malcolm Crockford put it, Tony is a creature of pure impulse, and now I can see myself getting closer or further to the idea of Tony.

On an episodic level, nothing from the show has really stuck with me outside of the ones containing the scenes I highlighted when I first finished the show. All my favourite episodic shows – Cowboy Bebop, Mad Men, The Simpsons – have episodes that can be described as ‘remember when?’. Remember when the Bebop crew took on space pirates and had to use a rebuilt Columbia to save themselves? Remember when Roger sang in blackface at his daughter’s wedding party? Remember when Homer went into space? Almost appropriately, for a show that hates its protagonist for his nostalgia and has him openly reject ‘remember when’ as a conversation topic, The Sopranos doesn’t go in for high concept episodes like that, so there’s no point trying to remember episode titles (and the few times it does tend to be very well-remembered, like “College” or “Pine Barrens”, even if it’s for less favourable reasons, like “Christopher”).

Zooming in even further, right into phrases and shots, I enjoy collecting turns of phrase from fiction and songs and history and my friends, and I gotta say, I remember barely anything anyone said on this show. “That’s the guy, Adriana. My Uncle Tony. That’s the guy I’m going to Hell for,” is the only one that’s lodged itself in my brain (as always, I take it completely out of context). In fairness, I’m missing a few really good quotes – “I’m getting the feeling like I came in at the end. The best is over,” is something Tony says in the pilot, and it’s almost too good, summarising six seasons of the show long before they even happen. But there’s also just profound philosophical difference; one of the most famous lines that, based on what I read, had a strong influence on viewers is “That’s the trouble with you Americans. You expect nothing bad ever to happen, and the rest of the world expect only bad to happen. And they’re not disappointed.” Aside from vastly underrating Americans and overrating non-Americans in a way only an American can achieve, I think Mad Men managed to explore the exact same concept in a way more useful than just pissing and moaning about it for 80-odd hours.

The show is at its most successful as a machine generating beautiful images; right from the start it throws tricky, cool-looking shots at the viewer, long takes and crooked angles and strange cuts, and as the show ages these tricks take on a grandeur, a larger-than-life beauty that makes this story about the inane tedium of day-to-day life into something epic. Right from the start, the most emotionally effective shots are actually the simplest; slightly wider lenses than normal for mid-shots that make everything look sparse and empty, like New Jersey is a wasteland, which obviously ties into the main emotion – we’re fighting over this? But despite this, not many of the shots ever actually stuck with me. My major issue with the show, more than anything, is that it’s too few ideas stretched over too long a time, and this is true on a filmic level as much as a story one. Cowboy Bebop is also built entirely out of trick shots, but they have a density, diversity, and quality that Sopranos can’t match; there’s no sense that CB is wasting our time the way Sopranos can, and in fact the trick shots are quite a joyful experience – joy being the opposite of what Sopranos is going for.

The one shot that’s stuck with me is right at the end, just before the famous final scene. That whole sequence is marvelous; I have a theory that great filmmaking is about showing what a character can and can’t perceive, and it’s partially fueled by wallflower’s great essay on that scene from The Shield, and partially by how great this scene feels, showing the step-by-step process of Tony’s murder as he misses the clues that a hitman is watching him, and it sells an underlying sense of ominous apocalypse even if you don’t fully follow what’s happening. But the shot I’m thinking of is the simplest, a closeup on Tony immediately after he walks in. It sets up a pattern of “someone walks in, rings the bell, cut to closeup of Tony, cut to Tony’s POV”, but it’s also the most intense moment of emotion in the scene, and possibly the series.

Tony has destroyed all his enemies, he’s got a solid business going, he’s looking at the place where he’ll be having dinner with his family, and he has a look of absolute exhaustion on his face. If all the world’s a stage, Tony intends to hit his marks, say the words, and walk off with the bare minimum of effort; he’s a soulless zombie, too tired at this point to feel joy or love, and all he can do now is go through the motions until death comes. This is all crushed into that expression on face in that close-up, and I recognise it as the same emotion running through my heart as I walk into work. My most positive reaction to the show came in how it presented the feeling of living in the vast machine of capitalism, to feel like one of the bottom steps in a pyramid scheme, forced to exploit others to survive and so pass on your own exploitation like an infection.

I really used to enjoy my work – it was never genius billionaire playboy philanthropist in a suit of armour, but I liked all the people I worked with, I felt like I was learning new and interesting things, and most of all I felt like I was doing something valuable, if not to the world at large then at least to the people around me. Years have passed, and the people have moved on (or escaped), I’ve reached not just the limit of my competence but of my willingness to become more competent (I don’t want to be the best waiter/kitchen hand in the world), and my illusion that I’m anything other than a warm body filling a space that not only could be taken by someone else but should be has been stripped away. On top of all of this is a sense that I’m trapped – that I and my parents and my boss and my country’s leaders have all made decisions that have made upward (or even sideways) movement nearly impossible. Unlike Tony Soprano, I have things that bring me happiness and people I love who I am certain love me. But I have to leave them at the door when I walk into work, and replace them with the image of Tony Soprano, stubbornly staying alive.

You might have noticed that this article is actually a fortnight shy of six months after my previous Sopranos article, and that’s because there’s a crucial difference between me and the show: I can’t hold onto a grudge. I really did intend to have this go up on the six month anniversary, but I actually got the idea for it two months ago, and the time spent writing this article was also time spent processing the emotions driving it. I can see my refusal to learn more is really vanity disguising itself as anti-capitalist righteousness, and ways to serve my political and moral views without making myself more unhappy for no reason. That’s the limits of basing your story around a single emotion – what happens when your viewer moves past it? Of what use does your invented language become? 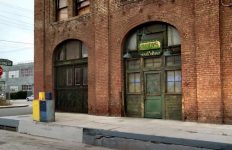