Browse: Home / THE WIND WILL CARRY US But We May Have to Meet it Partway

A car travels a winding pastoral road. Its passengers use a lone tree as a landmark. A boy perpetually worries about his school exams. A man works in a hole. Things roll downhill. Of all the films by Iranian auteur Abbas Kiarostami, this is the Kiarostamiest. The Wind Rises summarizes a lot of the signature visuals and themes that obsessed Kiarostami, at least to this point in 1999. After this he would retain his unique sense of narrative but employ even more form-forward approaches and (mostly) shoot on digital.

I will summarize what I knew for sure about the story of The Wind Rises immediately after watching. Behzad and two other men arrive in a labyrinthine Kurdish town in the mountains, hours away from their home base in Tehran. The town is as vertical as it is wide, navigable only with the help of its rural inhabitants. For a time the goal of Behzad and his companions – whose identities remain hidden as they only appear in long shots or as voices outside the frame – is maddeningly opaque , or at least translucent. The only clear known is their assignment hinges on the imminent death of a 100-year-old woman in the village.

Early in the film I jotted the epiphany “waiting for her to die so they can build a phone line through her home,” on the evidence that there’s a motif of telecommunication technology running through the film and conspicuous phone or electrical lines cross the frame in front of the woman’s residence. But then the characters confess they’ve come to document the town’s ceremony that begins once she has died. This seems plausible, though they’ve already strewn a few false leads involving treasure hunts and what they self-report to the town seems questionable. The only recording equipment in sight is an SLR (still) camera that Behzad operates himself.

If I missed an obvious confirmation of their role, I can at least take comfort that I’m not the only one a less than precise on the details. Reviews are conflicted on whether Behzad and his cohorts are production or media engineers or just posing as such, whether they’re a documentary film crew or on assignment for television. Behzad is referred in places as an engineer, a director, or a journalist. The imdb summary seems wildly inaccurate, claiming that Behzad is a “city engineer” and related to the dying woman. Jonathan Rosenbaum, a critic as dialed-in on Kiarostami as any person on the planet, gives the most likely definitive answer (or best approximation of one) because his summary taking the film crew aspect at face value fits both the narrative and a larger point about Kiarostami’s relationship with the subjects he films.

There is a burden placed on the viewer of The Wind Will Carry Us surrounding basic story points. At first this seems designed to frustrate the casual audience and/or give everything a sheen of arthouse importance. But Kiarostami’s careful withholding creates films that can hold two ideas at once, and for as long as the story can withstand collapsing its reality into one absolute, it can contain two truths as equals (in the way Wind summarizes his techniques and imagery, Certified Copy would later summarize this theme of dual realities). Behzad can be a nefarious opportunist and a harmless outsider. A woman can serve tea by day and hook by night. A young boy’s conflicting stories can stay in conflict until somebody gets presented with both versions.

Truthfully, the exact nature of Bezhad’s job in this mesmerizing town is beside the point. Part of what gives Kiarostami’s films their special perspective is this sidelining of things that seem important in favor of details that look like tangents. His movies tend to get sidetracked alongside their characters, striking up conversations with locals or watching the wildlife in their own oblivious struggles. Organizing these tangents according to theme unravels the simple plot into an impossible amount of material, a kind of fishes-and-loaves miracle of storytelling. And when the protagonist encounters a character that can verbalize the film’s moral – in Wind’s case a visiting doctor on a motorcycle – they’re of a piece with everything that has come before. Why get in a rush for the final answers, insists this movie. Enjoy the details. 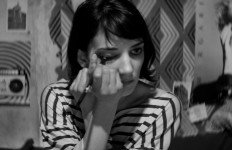 What’s Cooler Than Being Cool? The A GIRL WALKS HOME ALONE AT NIGHT Trailer!→