In sweltering Tokyo heat, a green, young cop named Murakami (Toshiro Mifune) is tracking down his own gun, swiped on a trolley by a pickpocket, — a formative quest that puts him through the wringer physically and emotionally, causing him to despair as the pistol is used first for robbery and then for murder. It takes him, too, all over his recovering city, from the markets and back alleys to homes and nightclubs and baseball games. Stray Dog, made by Akira Kurosawa the year before his international breakthrough with Rashomon, is a film about searching that naturally becomes exploratory, finding opposing people and viewpoints and reactions within one space, so it makes sense that it would itself be a potent fusion of inspirations on a fundamental level. In the director’s hands, Murakami’s step-by-step odyssey has as much to do with the postwar resurgence of interest in cities and their inhabitants as it does with practical demands of police procedurals and detective fiction.

It’s a prime example of Kurosawa thinking in terms of setpieces, which occasionally become their own mini-movies with unexpected turns and varied moods. In a standout early scene, Murakami, looking and feeling emasculated, tracks down the pickpocket’s female accomplice (Teruko Kishi) and, failing to get any answers out of her, spends the entire rest of the day tailing her, while she alternates between trying to shake him off and pretending he isn’t there. Kurosawa turns this sequence of events into a brisk, escalating, somehow dignified comedy built on well-timed cuts, awkward run-ins and the combination of Murakami’s single-minded determination and the woman’s I-can’t-believe-this-guy exasperation, then brings it all home with the disarming grace note of a conclusion: it’s now close to midnight, and “the kid” is still hanging around the woman’s house, so she brings him out a sandwich and a nice cold beer, giving him enough information to move on. Sitting together, they gaze into the night sky.

The very next scene pulls out all the stops: nearly ten minutes of the disguised Murakami wordlessly wandering the city’s cramped backstreets, hoping to attract the attention of black-market gun dealers, but for a while simply getting lost in the mass of fellow humans, his eyes superimposed over faces and movements. Stray Dog is nothing if not a physical movie; Kurosawa makes the most of bodies and crowds, and even in interior dialogue scenes his careful compositions aim to place all or most participants in the same frame. His characters let out cigarette smoke and thirstily drink in close-ups; there’s nothing they do more often than wipe their faces. In one of the film’s most memorable images, a group of dance-hall girls go to a back room after their act and, all together, silently collapse to the floor, covered in glistening sweat, like wilted flowers. 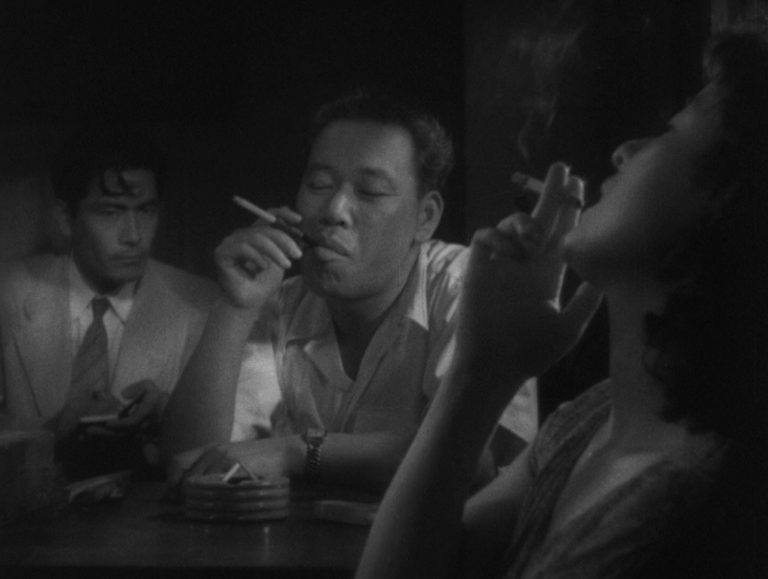 The exhaustion is palpable, as are the guilt and desperation, the forces that set the plot into motion and keep partially driving it. An emblematic late moment arrives when Harumi (Keiko Awaji), one of the dance-hall girls, shows Murakami an expensive dress that Yusa (Isao Kimura), her boyfriend who traded his ration card for Murakami’s gun, stole for her. “They deserve it for flaunting these things,” she proclaims angrily. “We have to do worse than steal if we want things like this.” Yet, instead of wearing the dress, she hides it, and ultimately rushes to seek forgiveness in her mother’s embrace. On the opposite end of this volatile emotion is the dogged policework, practiced with trial and error by Murakami — who ends up being a functional but fairly one-note character, virtually never seen outside of the job and defined entirely as a righteous, tightly wound rookie; Mifune, so mesmerizing as a live-wire antihero in the preceding year’s Drunken Angel and a year later in Rashomon, looks trapped in the role — but better embodied by his eventual partner, the relaxed and folksy Sato (Takashi Shimura, effortlessly walking away with the movie), introduced getting information from an arrested young woman by sharing some ice popsicles and shooting the shit with her.

The veteran Sato taking Murakami under his wing, showing him the ropes and, in one scene, casually bringing him home for a meal after a long day makes Stray Dog arguably the first classic buddy cop movie in addition to everything else, while their different experiences provide the film with two distinct viewpoints. Learning more about Yusa, the younger cop comes to identify and sympathize with him; they turn out to share a formative bit of backstory — both have had their knapsacks stolen on the way home from the war, which embittered Yusa and made him turn to crime in return, while Murakami recognized in himself the same impulse and decided to deal with it by joining the police instead. Sato, however, cautions against such thinking: the bad guys are bad, he says, they’ve made their choice, and the concern should be reserved for their victims. The fact that he literally gets the last word helps solidify the impression that the film aligns itself with him, making it less haunting than Kurosawa’s later High and Low, for which Stray Dog’s procedural detail, broad societal concerns and visual storytelling provided a clear blueprint. But then there’s the earlier scene of Murakami finally catching up with and apprehending Yusa, putting the cuffs on him after wrestling with him in the mud. For a minute or two, there’s nothing and nobody around but the two of them, and nothing they can do except lay there and breathe.

Year of the Month: FUNERAL→

The best original songs of 1940, according to the Academy→