Browse: Home / Year of the Month: Vomas on PAT AND MIKE

Every movie needs a reason to exist. They may vary from the noble (“This story simply had to be told!”) to the cynical (“We need Roger Corman to make a Fantastic Four movie or we’ll lose the rights!”) but at some point, somebody had to make a case for it. At the slightly bizarre end of that spectrum is Pat and Mike: “We need to make a movie to show the world that Katharine Hepburn is good at sports!” — not the most appetising concept for a 90-minute comedy perhaps, but great comedies have sprung from far less.

Apparently the idea came from husband-and-wife writing team Garson Kanin and Ruth Gordon (of Harold & Maude fame); you can imagine it popping up over champagne and deviled eggs at some kind of decadent Power Couple brunch — “Katharine, you’re good at sports. Is that a movie?” — but Kanin’s story is that the idea popped into his head one day while watching Hepburn play tennis: “As I watched Kate playing tennis one day…it occurred to me that her audience was missing a treat.” With that bombshell of an idea in mind and audiences presumably clamouring for another Hepburn/Tracy team-up after the success of Adam’s Rib a few years prior, Pat and Mike was born.

Pat (Hepburn) is a talented athlete stuck teaching Phys Ed to students at a fictional California college. She’s wonderful at any sport she turns her mind to, but her extremely Baxter-ish fiancé, Collier (William Ching), insists that she hold back to ensure that golf with potential sponsors will result in donations, not a bloodbath. As the movie opens, we get to watch them wincing her way through a brutally awkward doubles match with an infuriating couple — the hilariously annoying advice from Hepburn’s counterpart leads to a meltdown and a demonstration of some genuinely impressive skills — and also makes watching golf tolerable, truly a feat for the ages.

Luckily, the potential donors aren’t the only people watching this spiteful display of sporting excellence, and Pat is soon entered into a tournament where she’s free to casually outclass many of the best female golfers of the early ’50s. Her underdog success in the early rounds leads to a run-in with Mike (Tracy), a corrupt sports manager and promoter who breaks into her hotel room to see if she can be bought. Naturally she cannot — “she’s got a real honest face… the only disgusting thing about her” — but when her fiancé arrives at the tournament, she chokes, and genuine legend Babe Didrikson Zaharias is free to take the trophy.

Defeat stings, but the total lack of support from a loved one stings more — and so Pat leaps from a moving train(!) to get away from her terrible fiancé — and to seek help from the only sports manager she knows…even if he is a little crooked and the only other athletes he represents are an idiot boxer (Aldo Ray) and a horse that never wins. The golf season may be over, but what better excuse to switch sports and humiliate some tennis professionals? Unfortunately, lightning strikes twice, and another championship match is derailed by Collier’s ill-timed arrival— this time including a brilliantly trippy meltdown sequence in which the net has a mind of its own and Pat’s racquet shrinks to the size of a spoon. A few years after causing a scandal at Wimbledon, Gussie Moran romps to victory.

While the sporting sequences are fun, and Hepburn’s prowess is genuinely impressive, the movie really comes alive once Hepburn and Tracy are together. Aldo Ray is hilarious in support too, one of those perfect comic idiots who livens up every scene he appears in. Mike ships his whole entourage off for some rest and recuperation in the country, where the real screwball energy of the movie kicks in. Tracy’s dialogue is full of weird slang and rambling asides that contrast beautifully with Hepburn’s classic clipped style, and every minor character that crosses their path is delightfully insane. The script doesn’t do an amazingly convincing job pushing them together, but their offscreen chemistry makes it an easy sell — and the visual gag when they realise they’re falling for each other is one for the ages. She sees his face appear in a photograph of her fiancé — he sees her face appear…on his horse. It’s a tour de force of terrible 1950s special effects and one of the funniest things I think I’ve ever seen.

It’s easy to imagine a tighter, more classically satisfying version of this script, but the rambling oddness is what makes this stand out from the pack. It’s full of surprises, like the scene where Mike’s crooked past comes back to haunt him (in the form of Charles Bronson, in his second movie role!) only for Pat to take him down. The whole ridiculous scenario then plays out again for the benefit of a baffled police officer (Chuck Connors?!) and only gets funnier in the repetition. It’s inevitable that the Baxter fiancé will get dropped and that Pat and Mike will romp to sporting and romantic glory, but the thrill here is in the weird route it takes to get there.

Tracy and Hepburn would go on to make another seven films together, but she reportedly liked this one the best. I haven’t quite seen them all yet, but it’s hard to see this one dropping from my top spot either. It’s one of the most purely fun comedies of its era, with a superb and unusual supporting cast, some great gags and the bonus novelty of seeing some of the top sporting names of the era (and seeing them casually outclassed by Katharine Hepburn). It’s slightly odd, cheerfully imperfect and absolutely features too much golf, but there’s just so much to love in this movie — to put it in Mike’s words, it’s “cherce”. 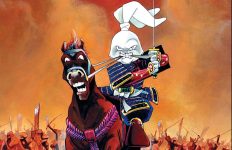