Oh, sure, I could attempt to go hunt down stills from her two appearances in Perry Mason, or her two episodes of the Wonderful World of Disney series The Swamp Fox, which also featured a young Leslie Nielsen—words some people don’t even realized have meaning. (He had brown hair!) But she also did the motion studies for the first role I think of her in, so there are images of her in a vague approximation of the costume. And I’m here to tell you, that’s good enough for me. I’ve loved her in the role my whole life, even in the days when it was almost impossible to actually see the movie—it seems to me it was one of the last Disney movies released from the Vault onto VHS, even.

She shows up a lot on lists of “you didn’t know these Disney characters were voiced by the same person!” But come on—you did, right? Her voice is really distinctive, and the characters are very similar in some ways. They are both cold, powerful women who are trying to make a teenager’s life miserable, which admittedly is a weird thing to be typecast as, but there it is. If you don’t know her as Maleficent, it’s likely you know her as Lady Tremaine of Cinderella. She didn’t want to take Maleficent, as she was suffering from tuberculosis at the time, but we’re all lucky she did, because that movie wouldn’t be nearly as good without a quality Maleficent, and Audley is perfect.

And it’s a weird shift from that to the sort of roles it seems she was doing on TV at around that time. She appears to have done a lot of those middle class white women who were achingly precise about things like class. On one of her Perry Mason episodes, it’s clear that she’s accusing a man of being a safecracker mostly because she didn’t like him for his class and his ethnicity. I mean, I’m not saying I couldn’t see Lady Tremain doing that, but the working in a bank part is not somewhere you could place her.

Still, both sorts of role relied a lot on the innate haughtiness that Audley conveyed so beautifully. It’s one of the reasons Maleficent is so ideal a role for her. And, of course, Lady Tremaine, but Maleficent needs dignity. You can have a Cinderella’s Stepmother without one, though of course she was written to have it in this version, but one of the reasons Sleeping Beauty works is the contrast between Maleficent and the three good fairies, and while they have many things, what those three don’t have is dignity.

Without those two roles—and Madame Leota in the Haunted Mansion—she probably wouldn’t be as well remembered today. She’s another Working Actress; she did Lux Video Theatre and I Love Lucy and The Twilight Zone. Fifteen episodes of Green Acres, from what I can tell as Eddie Albert’s mother. Nine of My Three Sons. Two of Peyton Place and three of The Beverly Hillbillies. A standard ’50s career elevated to greatness by two voice roles. And a third that most people definitely don’t realize is the same actress.

Help us save up to afford to take the kids to see her third role in the After Time; consider supporting my Patreon or Ko-fi! 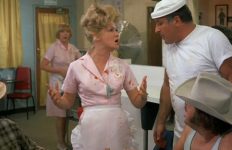