If you search for Gloria Blondell, people assume you mean Joan. That’s not all that surprising, really. Joan had quite the career. Oh, she only had one Oscar nomination, and she lost, but that’s still more than Gloria had. In fact, arguably Gloria’s most famous role is one where you never saw her, and indeed one where her performance has been forgotten, and people remember the Tress MacNeille version instead. But Gloria did six of the nine classic Daisy Duck shorts, and that’s something Joan never had.

Gloria claimed the family had been in the theatre since the days of Richard the Lionheart. She herself, she said, was on the stage at nine months old, part of the family vaudeville troupe The Bouncing Blondells. I’m not sure how much “bouncing” she really did at that age, but I’m also not sure what the family act was. Everyone mentions it when writing about either of the sisters, but no one says what they did. Singing? Dancing? Comedy? No idea. It’s clear that the family was talented. I have written about a lot of people with the same last name, but they are surprisingly seldom related. Still, no idea what the vaudeville act looked like.

If you are a fan of the classic Disney cartoons, though, Gloria’s is the voice you hear when you think of Daisy Duck. The first time Daisy spoke, she sounded like Donald. However, the Gloria version includes the cartoon “Donald’s Dilemma,” wherein Donald is hit on the head and ends up with a beautiful voice—but does not remember Daisy. She is the version of Daisy to threatens to break up with Donald if he doesn’t control his temper. She’s not the modern Daisy, but to me, she’ll always be the Daisy I remember.

Long after her older sister went to Hollywood, Gloria continued on the stage and on radio. She did any number of radio classics, including Lux Radio Theatre and Johnny Dollar. It honestly wouldn’t surprise me if the fine people at Lux used her when they couldn’t get her sister, but as always, it’s harder to research that sort of thing. One of the things this column has taught me is that the casts of radio plays are ephemeral; there doesn’t seem to be anyone interested in recording the information. There’s a little more work in the theatre, but not much.

There are probably not a lot of people who worked with both Ronald Reagan and the Three Stooges, much less who also belong on the list of Disney Legends. She isn’t one, and frankly I think she’s more deserving than the cast of Golden Girls. It feels as though the people deciding who makes it onto the list are ignoring some great names, and Gloria Blondell’s is one of them.

She also did the short where Donald steals his nephews’ money to take Daisy on a date; keep me from such dire financial straits as that by supporting my Patreon or Ko-fi! 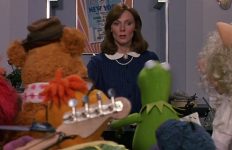