Technically, she would fit for an October some year. After all, she’s that rarest of things, someone who won an Oscar for a horror movie. (Genre movies in general, really.) But at the time she accepted her award for Rosemary’s Baby, she’d been working in the industry for fifty years. She’d acted and written. She had a Tony nomination for originating the role of Dolly Levi in Thornton Wilder’s play The Matchmaker, which would go on to be Hello Dolly. And, sure, she was great in Rosemary’s Baby, but she’s always going to be Maude to me. And from what I can tell, Maude wasn’t too far off from the real Ruth Gordon.

Reading between the lines, I believe that Ruth Gordon grew up well-to-do. As a young girl, she wrote to various actresses for autographs. This seems to have inspired her to begin acting herself; her father didn’t think that would necessarily be a career, but he went with it. And she got along nicely. Her first movie was in 1915. She acted pretty well everywhere, from what I can tell; her film career is old enough so that she actually acted in the Edison studios in New Jersey. And on the stage in New York, London, Berlin—and Colorado?

Oh, and also she wrote a few movies along with second husband Garson Kanin. She’s only credited on seven movies and six TV shows, but two of those movies were Hepburn-Tracy classics Adam’s Rib and Pat and Mike. All told, she received three Oscar nominations for screenwriting between 1947 and 1952. Apparently she based the relationships between Hepburn and Tracy’s characters on the relationship between Hepburn and Tracy themselves, so that’s interesting to know. Obviously I don’t know how much Gordon wrote and how much Kanin wrote, but still.

It seems she really liked acting in movies, and she was glad to get back into it after decades away. Actually, there were three distinct branches of her film career; she did three movies back in 1915, then a handful in the early ’40s—she was even Mary Todd Lincoln in the classic Abe Lincoln in Illinois. Then in 1965, she was in Inside Daisy Clover in a highly acclaimed role; it was the first time she was nominated for an Oscar for acting, and she won a Golden Globe. That era of her career included about a dozen and a half movies, the last coming out two years after she died.

It delights me to discover that she was a busy and involved woman literally to the day she died. She went on a walk. She ran errands and talked to friends. She was even working on a play; she’d written several in her lifetime, even after her screenwriting days were over. And she was 88, proving in her own life that it was possible that you could be older than eighty without just marking time.

And just because I cannot resist, have a bonus picture of Ruth Gordon, age four. Obviously it’s not how I think of her, but come on! 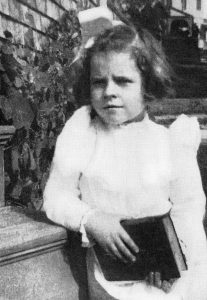 And if you enjoy this kind of thing, my family is not well-to-do and you can make a lot of difference by supporting my Patreon or Ko-fi!