Okay, let’s get this out of the way. Alfred Molina, born Alfredo, is the son of Madrid-born Esteban Molina and Italy-born (I don’t know exactly where in Italy) Giovanna Monelli. He speaks both Spanish and Italian fluently. He himself was born in Paddington, London. I find it a little frustrating that there is, in this day and age, an actor whose career still includes “he plays people from everywhere.” It’ll stop bothering me when there are more opportunities for actual Hispanic and Middle Eastern and so forth actors. I get that Molina likes the variety, but it’s still a real issue in both British and American film.

The money he made playing Satipo in Raiders of the Lost Ark apparently paid for getting his home ready for the birth of his child, so that’s nice. And it kickstarted what has become quite the career. Often, these days, I end up writing about people whose work I don’t really know very well but who feel important enough to write about anyway. This is very much not the case with Alfred Molina. I’ve seen about twenty of his movies and a handful of TV shows he’s been in. I’ve seen some of the more obscure ones, actually, including both his Shakespeare movies.

He really is extremely versatile. For the first couple of decades of his career, it looked as though he was going to have the standard British Character Actor Career; he did some arthouse stuff, was a minor character in bigger-name stuff, and was inexplicably third-billed in Species. (Which is not one of his movies that I’ve seen.) Honestly, one of the first times he played a major character in an American film was when he played Snidely Whiplash opposite Brendan Fraser’s Dudley Do-Right. Which is a movie people don’t always remember even happened.

And then came Spider-Man 2. Of all things. This was before the MCU came along and started sweeping the Oscar nominees, not that he’s an Oscar nominee, but they’re pretty hardcore into BAFTAs, too, and he’s been nominated for three of those. Anyway, he took over as villain after Willem Dafoe as the Green Goblin, because that particular series of movies started with its best-known actors as the villains. And he gave a good, poignant, powerful performance that probably opened lots of doors for him.

If Netflix ever gets around to releasing Wizards, the third series in the Tales of Arcadia universe, it looks like he’ll have a pretty important role in that one. Those shows are frankly some of the best-cast in television. Alfred Molina could have a lot of fun in the series—and we could have a lot of fun watching it. I’ve been looking forward to this series for ages, and they just keep taunting me about it.Realizing it’ll be Alfred Molina just makes it more frustrating.

Help pay for our Netflix subscription to finally someday see the show; consider supporting my Patreon or Ko-fi! 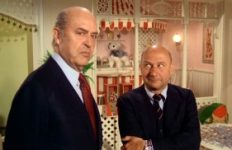