He’s not named after Cary Grant. It turns out Cary Elwes is one of those British actors with a prestigious family lineage, descended from nobility and all that. His line of the family just doesn’t hyphenate anymore and are the Cary Elwes family, not the Cary-Elwes family. His full name is Ivan Simon Cary Elwes. (See also Ralph Nathaniel Twisleton-Wykeham-Fiennes and his brother, Joseph Alberic. And, yes, the brother of the guy who played Voldemort shares a middle name with Dumbledore. Huh.) So when he played Guildford Dudley in Lady Jane, he came by his aristocratic dissipation naturally. And A Christmas Carol? His ancestor, John Elwes, was called “Elwes the Miser” (and that’s a story worth reading, if you’ve the time) and may have been an inspiration for Ebenezer Scrooge.

But come on—none of that is how we know him. Though arguably, we all know him because of Lady Jane. When Rob Reiner was searching for a Westley for The Princess Bride, he watched Lady Jane, and his immediate thought was, “Can that guy do comedy?” Because if he could, that was his Westley. One quick Fat Albert impression later, and we’d have a Dread Pirate Roberts for the ages. And Reiner was right; without Elwes, the movie doesn’t work. Of course, he’s also right in that it’s true of the people we’ll be getting to over the next two months.

He’d never fenced before, you know. He had done a little stage fencing that he couldn’t remember anything of, and he and Mandy Patinkin instead put in two months of intense training with experts. Definitely not helped by the bit where Elwes broke his toe on the set and could barely walk, much less do complicated footwork. But he had the dedication to learn how to do it, and you’d never know. (This is also part of my response to people who are disdainful every time a casting call suggests you can learn a physical skill. You can, if you’ve got the raw ability and the determination.) He ran and fought and dueled, and he looked spectacular doing it.

And, yes, he could do comedy. Importantly for the film, he did the role without winking at the camera all the time. Now, I’ve since seen him in roles with a little more winking, but the best of them take advantage of what we’ve learned from Princess Bride and let him play it straight. I’m awfully fond of the dub of Porco Rosso, and he’s part of the reason why. Despite actually being British, he’s just so good as the ridiculous and conceited American pilot. He doesn’t even do much winking in Hot Shots! It’s hard to take a man seriously when he concludes a complicated mission as a military pilot by explaining the difference between a chafing dish and a Crock Pot, but Elwes give it his best.

What’s more, Elwes is an accomplished writer. I haven’t seen Elvis and Nixon, but Elwes wrote the screenplay. His book about the making of The Princess Bride is frankly why I’ve decided to write about the major players; I’ve read it several times and enjoy it every time. Just as I’ve seen The Princess Bride probably dozens of times since the first time I watched it, when it was new on VHS and my older sister wanted to see the movie version of the book she loved. She thinks Cary Elwes is perfect in it, too.

Help me seek my fortune; consider supporting my Patreon! 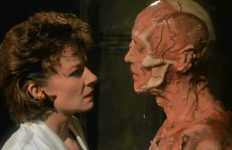