Hard to believe now, but I didn’t actually like George Clooney, when I was first aware of him. I did sometimes watch Sisters and The Facts of Life, but I don’t remember him from either of those. And I seldom watched Roseanne, having never really liked it. So, yes, I first thought of him as Doug Ross. And Doug Ross is frankly kind of loathesome. He gets better as the series progresses, but I never did like him and always thought Carol could do better. And then he left the show, so there was that. I was fine with it; I thought the series was better without him.

But then a funny thing happened—I saw O Brother, Where Art Thou? And goodness knows Everett Ulysses McGill isn’t that much nicer than Doug Ross. But it’s such a radically different role in some ways that I began to realize that, yeah, Doug had been an act. What’s more, I then began to pay actual attention to George Clooney the man, and him, I quite liked. Obviously, all I can talk about is his public persona, but his public persona’s a lot of fun. Not nice, the way Tom Hanks is, but fun—the Good Night, and Good Luck commentary track is just a sheer delight, full of Clooney’s own quiet mocking of his persona.

One of the things I like about George Clooney is that he’s a good-looking man and knows it, but he doesn’t take it too seriously. I wouldn’t be surprised to know that he considers it to have held him back; while people are less inclined to think an attractive man can’t be intelligent than an attractive woman, they are less inclined to think he’s a talented actor. Not a lot of people seem to have appreciated his range, before the Coens worked with him. For one, they have recognized his natural gift for comedy, which others came to use.  Easily my favourite moment in The Descendants is the bit where he proves that it’s impossible to look cool running in flip-flops; if he can’t, no one can.

It’s interesting to think that it was his cousin Miguel who got him his first acting job, but of course that whole family is talented. Rosemary’s on my schedule now. (As is Jose Ferrer, not actually a blood relation of George’s, but still a part of that talented family.) I’ve got a book by Nick about movies that changed the industry that only once briefly references one of George’s movies, though I’ll admit it’s always pleased me that, rather than put George into old age makeup for The Monuments Men, they just had Nick play him. The resemblance between father and son is so strong that it’s just what George is going to look like at that age anyway.

And there’s George’s self-deprecation. For one, my fondness for him increased quite a lot the year I saw him at the Oscars not on the red carpet but out where fans were being held back by a chain-link fence, shaking hands and taking pictures. And then there’s his response to the question of whether he’d ever met Arnold Schwarzenegger. His repsonse was a cheerful, “Yes; we almost killed the Batman franchise together once.”

Be nice like George; consider supporting my Patreon or Ko-fi! 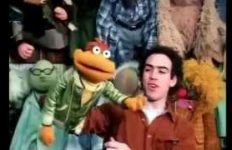