One assumes this short, one of the few to feature just Donald Duck, Aquatic Sociopath, and Pluto, Mickey’s Dog, is in-universe part of a larger story and what we are seeing is merely a vignette of some vacation the characters were taking among themselves. For one thing, we don’t usually see Donald and Pluto interact unless Mickey’s around. For another, holy crap did Donald bring a lot of food if it’s just for himself. Sure, cartoon characters regularly eat more than their own body weights if it’s part of the gag, but it still makes more sense my way.

Donald is gadding about on the beach. He’s got a large inflatable horse, which he of course dubs “Seabiscuit.” It gets the better of him, as so much in the universe does, so he decides to sic it on Pluto. Who spends a merry minute or two trying to fight what he sees as an animal attacking him before ending up inflated himself and blowing away. Then, ants attack Donald’s mountain o’ food, and he uses flypaper to try to prevent this; naturally, Pluto gets caught in it.

I watched this with my three-year-old daughter, and Irene didn’t laugh until the end, when Donald got a very minor comeuppance. I don’t know if this is because I wasn’t laughing, and Irene’s a social laugher, but she didn’t really seem to find most of the cartoon funny. And I’m with her, if that’s true. For one thing, as you might tell by my summary, I really think the cartoon is too hard on Pluto. A lot of the time, Pluto’s difficulties, like Donald’s own, are bestowed upon him by the universe. However, this is one of the cases where someone is basically attacking him, and I don’t find that as funny.

Basically, Donald sees Pluto and thinks, “Boy, I bet it would be funny if he had as hard a time with this as I am coupled with actually believing it’s a real animal.” Which is pretty cruel. Relatively low-level by Donald’s standards—he isn’t actually trying to kill Pluto, unlike the times he’s tried to kill his nephews, but it’s really unfortunate. It is in many ways a difference between Warner Bros. and Disney, this casual cruelty in its characters. I don’t think you’re ever supposed to fully sympathize with the cruel Warners characters, with the possible exception of wanting Wile E. Coyote to get a bite to eat, but Donald is so often the sympathetic character while being a total jerk.

I mean, I don’t blame Donald for not wanting the ants to get his picnic. I really don’t. (They’re relatively realistic, too, by the standards of animated ants. Though there’s some unfortunate cultural baggage with them, since they’re explicitly intended to remind the audience of Westerns.) And I suppose he doesn’t get Pluto stuck on flypaper on purpose, though he’d much rather laugh than be any amount of help. Pretty much standard Donald, really.

Help keep my family in Giant Mountains of Food; consider supporting my Patreon or Ko-fi! 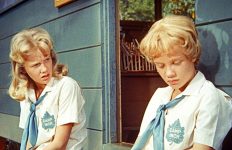