I’m sorry, purists, but my response to the Great Sub Or Dub Debate in anime has always been “it depends on the quality of the dub.” I’ve talked about this before. I will doubtless talk about it again, when it becomes relevant. But I was watching Castle of Cagliostro last night, which isn’t even technically relevant to this discussion as the dub wasn’t produced by them, and I was thinking how generally well Ghibli has done in the field of dubbing—though I’m not, of course, qualified to speak on the subject of their accuracy to the original material, since I don’t speak Japanese.

I’m honestly not always a fan of celebrity voicework. A lot of the time, it feels like stunt casting, and Chris Rock’s comment that voicework is easy is always in the back of my mind at times like this. Because what he was doing in the Madagascar movies wasn’t voicework, really. So understand that my fondness for the Disney Dubs has nothing to do with the casting of Lauren Bacall as the Witch of the Wastes or Cary Elwes as the Baron—or Curtis. Not exactly. Billy West and Tress MacNeille are perfectly capable of turning in fine performances.

What has always struck me about the Disney Dubs, though, is how appropriate the casting feels. Okay, so Phil Hartman as Jiji is great because Phil Hartman was always the right choice. But Werner Herzog as the German tourist in The Wind Rises was an inspired choice, and it was probably harder to get him to agree to it. Christian Bale as Howl. Cloris Leachman, Betty White, and Lily Tomlin as old ladies in Ponyo. These aren’t people doing a bit; these are people really putting in performances.

I’m aware of the complaint that Disney doesn’t really give Ghibli good distribution, and it’s certainly true that they are no longer handling the US distribution for Studio Ghibli. Though it’s not as though any other anime company has better distribution in US theatres. So we’ll see if it improves under their new deal; I think I’ve only ever seen three anime in the theatre, and they were all Ghibli under the Disney deal. I haven’t even had the option to see others, and I live in a town that has a theatre that will play foreign films. I’ve only seen one French animated film in the theatre, come to that, and it was at that same theatre where I saw Princess Kaguya.

Miyazaki himself isn’t a purist; his favourite version of Porco Rosso is the French dub, with Jean Reno as Porco. But for an American version, was Michael Keaton such a bad choice as all that? And he isn’t being too over-the-top and Michael Keatony, either. I feel that the Disney Dubs are both cast better and performed better than they tend to get given credit for. I’m certainly willing to listen to an argument that Disney has mutilated the meanings of the scripts—though I’d also point out that there’s a certain amount of cultural difference in any translation, sub or dub, and that a show I like with a particularly bad dub has footnotes in the fan sub, because it’s the only way to get some of the jokes.

I don’t know if Studio Ghibli is the best animation that Japan has to offer; I will say that it’s probably the best that has regular viewership in the United States. I will also say that the mere existence of the Disney Dubs has a lot to do with how well known the films are in the US. I think they’ve probably also persuaded no few people to look further into Japanese animation, and foreign animation in general, and that all by itself is a positive thing.

There are still some Ghiblis we don’t own; consider supporting my Patreon! 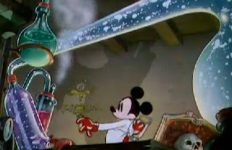