Today is a big day for this column; it’s Mickey Mouse’s official birthday. (Because “Steamboat Willie” debuted on this day in 1928.) Those in the know and with the ability can spend this day at the Magic Kingdom, and in particular go on the Little Mermaid ride. On this day, and no other, the Sun is in a specific alignment to produce a hidden Mickey in the queue area. Obviously, this took great care on the part of the imagineers. They had to be extremely creative to put it in place; you figure they must be disappointed when, as last year, it was apparently too cloudy to see.

The hidden Mickey as a concept is actually astonishingly young. According to Disney lore, it stems from the design phase of EPCOT. The edict had come down that EPCOT was to be an “adult” area of the park (ways you can tell Walt was dead, I guess), and the characters had no place there. Kind of the job definition of being an imagineer means being someone you can’t tell not to do something, so the put Mickey’s image in—but hidden. Just the silhouette version. The large circle and the two smaller ones in the right place to be ears.

Officially, it just has to be a representation where there’s no reason to be one, leading to the most ludicrous “hidden Mickey” image on Wikipedia, which is the Mickey Pylon. This is a 105-foot-tall power pylon in the shape of the three circles. Nothing too large to be transported on the roads counts as “hidden,” in my book, though, and I’m a Hidden Mickey Snob who insists that it has to actually be something you wouldn’t necessarily see unless you were either lucky or looking for it. This isn’t the official definition, but it’s mine, and I like it better.

I’ve seen, in doing my research, an argument that hidden Mickeys are yet another reminder that Disney is an all-encompassing force, and that’s . . . weird. Like, you don’t need to spot three plates arranged in the right shape while on the Haunted Mansion (an unofficial one, it seems, that is occasionally put in place by cast members and taken apart again when someone in authority notices) to know that you’re in a Disney park. Or watching a Disney movie; the phenomenon is there, too.

Actually, Disney lore to the contrary, there appear to be hidden Mickeys going back at least as far as 1937, since there are hidden Mickey bubbles in the hand-washing scene. On the other hand, having gone through large amounts of a hidden Mickey gallery on one of my research sites, it’s clear that the hidden Mickey in its classic form is a demonstration of the concept known as “pareidolia,” wherein humans see patterns where none exist. One large circle with two smaller ones? You’re going to see that in any random collection of circles, whether it’s intended to be Mickey’s head or not.

In fact, I once saw a cloud, while standing in line for the submarine at Disneyland, that was shaped vaguely like Mickey and joked that Disney was on top of everything when you were in the park. The classic trefoil design so common in things like Gothic architecture can look vaguely like Mickey. Do you count that when you’re looking at the actual design of Notre Dame? Some people do. I went through that gallery with my kids, and there were a lot of moments where we were squinting and pointing and arguing. Then there was, you know, the animal in the stands of the football match from Bedknobs and Broomsticks just wearing a whole Mickey Mouse t-shirt. Not the classic outline, but definitely, inarguably a hidden Mickey. From before 1982.

You would not think it’s so possible to argue about what is, in essence, as little as three circles. Some of the older ones tend to be more of Mickey’s profile, and often you’ll get that Mickey t-shirt or a character with a Mickey Mouse watch or similar. Those, you can’t argue. But are they intentional? Are they fun or annoying? Are they from the beginning of EPCOT or decades older than that seems clearly answered, at least, but there are discussions well beyond that. Ones that were no doubt held in the Little Mermaid line today.

Help my family check out more hidden Mickeys in situ; consider supporting my Patreon or Ko-fi! 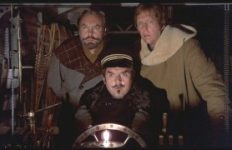