Roy Oliver Disney doesn’t come up much. You can tell, because this may well be about the first time he’s been mentioned in this column. However, without Roy, there is no Disney as we know it. Not just because Walt moved out to Los Angeles after his brother had. The pair co-founded the Disney studios. Roy was the money man, the practical arm to Walt’s vision. Walt bought him out relatively early, but Roy remained at the company after his brother’s death. It was, in the end, Roy who made sure that Walt Disney World came to fruition, and not just by making sure the money was there.

Roy was the older brother. Hard to know, now, how much he took care of Walt in the strained household of Elias Disney, but the brothers worked together in their father’s newspaper delivery business. We’re not talking a paper route, here—we’re talking literally delivering well over a thousand papers at the start, a number that only increased with time. It’s also probably no coincidence that Roy, after graduating from high school, spent some time as a bank clerk.

Oh, Roy Edward Disney is quite the major figure in studio history himself. But there’s something about Roy O. Disney that should be talked about more. The idea we have of the early days of the company is pretty well Walt sitting at a desk, hand-drawing Mickey cartoons all by himself. That is not even close to what it looked like, and frankly the image of Roy hustling the banks and sponsors is much closer to the truth. Yes, a lot of the studio history was about animation, but Walt didn’t do as much of that as studio lore would now have you believe, and he wouldn’t have had the chances he did without Roy.

Roy got things done. It wasn’t just the money, though goodness knows it was the money. After Walt died, Roy stayed on to finish Walt Disney World. Our article image today comes from the always helpful in these circumstances Anthony Pizzo and is of a statue of Roy that appears in Main Street, USA at Walt Disney World. What I’m particularly fond of in this image is that it’s not just Roy with Minnie, symbolizing his relationship to the company—Minnie is, of course, a hugely prominent character who’s less important than Mickey. But it’s Roy there, in the center of what he created. The castle behind him, the brothers’ boyhood home reproduced around him.

Roy gets forgotten. In a way, that makes him an ideal candidate for Attention Must Be Paid. He’s here in Disney Byways instead because one of the things I’ve long tried to do is pay tribute to the lesser aspects of Disney history. Alas that Roy, without whom there is no Disney company, is one of those.

Help me out with my money issues by supporting my Patreon or Ko-fi! 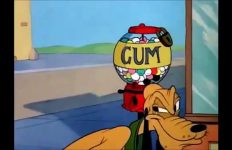