Few of Disney’s shorts not featuring the Big Three have any kind of cultural memory. They don’t linger the way Mickey, Goofy, and Donald do. Oh, that’s in part because a lot of them didn’t particularly have characters. “The Old Mill” is a beautiful short, but at the same time, you can’t exactly have people wandering around dressed as the frogs or what have you. But this one included a song that would become a sort of anthem; probably most of you can sing it yourselves. It also spawned several sequels, despite, as I’ve mentioned, how little Walt himself liked sequels.

Probably the most noteworthy thing about this short is that it originally featured a horribly anti-Semitic bit where the wolf dressed up as a Jewish peddler. This version remained in the short for fifteen years before being altered to the version seen these days, where he’s “working his way through college.” That means after World War II, after the true horrors of the Holocaust were revealed. And, sure, animation takes time, but three years after the war ended is longer than it should take to replace perhaps fifteen seconds of animation.

And of course, it’s absolutely right to criticize Disney for things like this. It’s the sort of thing I wish the company was dealing openly with. Perhaps not by putting the short in its original fashion on Disney+, because goodness knows I don’t want my kids stumbling across that. I’m not entirely sure they’d recognize it as a Jewish stereotype, because I don’t think they’ve ever come across any Jewish stereotypes to compare it to. But I assuredly do not want them to start here, with the little pigs. I would just like perhaps a documentary where they openly confront that, yeah, for a lot of years and in a lot of ways, the company did terrible things like this.

The rest of the short? It’s very ’30s. Chuck Jones believed that this was the first time three characters were basically drawn to the same model but were still very different and very distinctive. But it’s simple and cheerful and memorable. More so once the wolf’s disguise isn’t drawn to Nazi propaganda, of course. Perhaps it’s the sort of thing that was needed in the Depression; conversely, it feels a bit nothing today. So weird to think that what was removed from its original release for being offensive was the word “lousy.”

Help keep the wolf from my door; consider supporting my Patreon or Ko-fi! 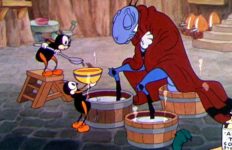 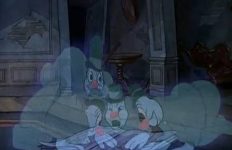 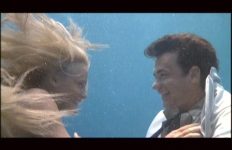 Disney Byways: SPLASH and the Rise of Touchstone→