This cartoon plays on some of the weirder beliefs in our society. First, frankly, is the framing of predators as bullies. It’s seldom in a predator’s best interests to toy with their prey; they have no desire to waste the calories, which would then have to be made up for with further prey. Second is the idea that just standing up to a bully is sufficient; it’s courage that a mouse lacks, not, you know, teeth and claws and size. Then, of course, there’s our weird belief that all a dog catcher really wants is to attack dogs, not to keep them, and our streets, safe from dangerous animals.

Mickey (still Walt at this point) is experimenting in his lab, something we’ve definitely seen him do all the time. He has now invented a potion that will make the fearful brave. First, he tests it on a fly, which manages to beat up a spider. He then sees a mouse cornered by a cat and sprays the mouse, which beats up the cat. The cat gets into a fight with Pluto and is cornered in a garden shed, so he sprays the cat. It beats up Pluto. Pluto ends up in the clutches of Pete (Billy Bletcher), so Mickey sprays Pluto.

While, and I think this is pretty damn terrifying, Pete actually has him at gunpoint. Pluto is showing no danger to anyone. He’s got a collar and a tag; they’re part of his character design. Dogs like Pluto are generally picked up very quickly, if the dog catcher doesn’t just contact the owner, lecture them for letting their dog roam the streets, and hand the dog over right away. And, yes, Pluto has managed to let another dog out of the back of the truck, but Pete literally hauls out a shotgun and it going to shoot a dog that has a tag and collar. And then doesn’t when the dog actually turns vicious, a time when, frankly, he’s well within his rights to shoot the dog. And would know it.

There’s a bare germ of plot in this cartoon, but that’s not why it was made. It was made for that opening, with Mickey in his lab, because this was yet another cartoon that was part of the test process for Snow White. He’s actually working from a book resting on a skull at one point, and while it’s not lingered on, I definitely noticed it while watching. It’s not as realistic as the skull the Evil Queen has in her own lab, but this is a Mickey Mouse cartoon, and a realistic skull takes us into a whole weird area, given the characters in these cartoons.

These shorts gave Disney animators a way to practice technique. Obviously, it was fully profitable to just make shorts forever; in fact, Disney’s profits were on shakier ground with features than shorts. Disney, unlike Schlesinger across town, was not interested in stasis. He wanted to push the envelope and test the limits of the medium. Goodness knows there are problems with the company this built, as we’ve discussed here more than once. But there’s something wonderful about the company’s boldness, especially in these early days.

Be bold and support my Patreon or Ko-fi! 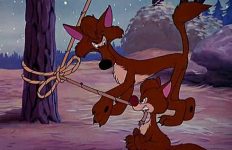