“One of the year’s most quietly devastating performances can be found in Terence Davies’ immaculately rendered portrait of poet Emily Dickinson. That is, it’s quiet until the moment Emily (played with a fierce, undeniable intelligence by Cynthia Nixon) releases the emotions she’s kept pent up inside her. Cloistered as she is (she’s introduced at a strict religious boarding school, and even when she contrives to be sent home, she very rarely goes out), the Emily of A Quiet Passion is eager to make her mark on the world, if only the world were ready to accept her. (The literary establishment most definitely isn’t.)“

Craig J. Clark/Hooded Justice on The Void for Crooked Marquee:

“At a time when indie filmmakers are increasingly turning to crowdfunding platforms to bring their modestly budgeted visions to life, many genre films arrive with a cult audience baked right in. The Void doubles down on that by being about a cult, specifically of disciples in thrall to a Lovecraftian entity bent on altering reality as we know it. All that stands in their way: an out-of-his-depth cop and the skeleton crew of a hospital the hooded men have laid siege to, as well as a pair of trigger-happy vigilantes who don’t work or play well with others.“

Keith Phipps on In The Fade for Uproxx:

“From the moment Katja returns to find her life shattered, [Faith] Akin seldom lets the tension subside, and [Diane] Kruger’s performance matches the intensity at every step. In the Fade doesn’t leave her side as she goes through one harrowing experience after another, whether getting grilled on the details of her private life or sitting in the courtroom as a forensic expert explains how exactly the bomb killed her family, down to the grisliest detail. It’s a remarkable performance, one that sees Katja taking a trip through one corner of hell, then another, with Akin’s camera rarely leaving her side.“

David Ehrlich on The Commuter for IndieWire:

“The silliest of the low-rent, high-impact thrillers that Jaume Collet-Serra and Liam Neeson have made together (“Unknown,” “Non-Stop,” and “Run All Night” being the previous three), “The Commuter” may not match the potent charge of their earlier collaborations, but this amusingly ridiculous ride is still a few cuts above the kind of swill you’d expect to arrive in theaters on the second weekend of January.

[…]It’s the kind of action vehicle that Barton Fink might have written if he arrived in Hollywood during the mid-’90s.”

Sam Adams on World of Tomorrow, Episode Two for Slate:

“As moving and occasionally frightening as Episode Two can be—imagine the “I can feel my mind going” sequence from 2001, only from HAL 9000’s point of view—it’s also incredibly, sometimes painfully, funny. A conversation between Emily Prime and a similarly aged version of Emily 6 plays out like a cosmic version of the mirror scene from Duck Soup, and the appearance of “memory tourists” who tromp through Emily Prime’s mind with the equivalent of muddy boots on serves as a wry commentary on the compulsion to document precious moments instead of actually living them.”

“Dangeresque, you will recall, is Strong Bad’s homemade action movie franchise—installments include Dangeresque II: This Time, It’s Not Dangeresque 1, and Dangeresque 3: The Criminal Projective—in which Dangeresque fights the law, but he also fights the crime, but not as much. This time, Dangeresque has to get by without his sidekick Renaldo, probably because this episode was done with puppets instead of animation and there’s no Coach Z puppet.

[…]Thematically, however, Dangeresque: Puppet Squad – The Hot Jones Hijack is even bleaker than Twin Peaks.”

Takeaways from a second screening of THE LAST JEDI:

-Mark Hamill’s performance is so rich.

-The opening crawl ends in an ellipsis with four dots.

Sheila O’Malley on “Titanic, 20 years later” for The Sheila Variations:

“Unless your pleasures involve boiling puppies – for which you SHOULD be ashamed – then you should never feel guilty about pleasures. This Life sucks and is often a VALE OF TEARS. If something gives you pleasure? LOVE IT as hard as you can.

[…]Only after seeing the film multiple times, did I notice her earrings.

It’s so obvious once you see it, and may seem too obvious, but it’s not. A detail like this works in a subtle unspoken way. People are often surrounded by relics of the person they used to be, talismanic objects reminding them of a certain person, a certain time.”

“During a Q&A about Phantom Thread, you mentioned that you’d been in contact with Daniel Day-Lewis to develop your characters, and joked that “a lot of texts ensued, some of them naughty.” I sensed a sort of soft-incest vibe between Reynolds and Cyril — your thoughts?

“No, it’s not perfect, and its application isn’t always essential to determine the value of a film, but tests like the Bechdel ask audiences to more closely consider what they’re watching, how it’s crafted, and what it’s trying to say. More often than not, that’s a message delivered by things that aren’t said, especially between two women. Many of this year’s highest-grossing films have featured women in prominent roles, but just because they appear on-screen doesn’t necessarily mean that they’re as active and present as the Bechdel Test asks them to be (and it’s a very, very small ask).”

Genevieve Koski and Tasha Robinson, with Alissa Wilkinson, Todd VanDerWerff, and Julia Alexander, on “the movies that transported and troubled us in 2017” for Vox:

“Tasha Robinson: I’m definitely not feeling the work in watching movies like Spider-Man: Homecoming, Guardians of the Galaxy 2, and Thor: Ragnarok, except to the degree that seeing and writing about these films literally is my actual work. For the most part, I found 2017’s most overtly escapist blockbuster films pretty easy to watch, no matter how loud and busy they got. Dropping into the MCU at this point is like catching up on a soap opera.

Genevieve Koski: The theme connecting many of my favorite films of 2017, blockbuster and otherwise, is surprise, the feeling of being taken off guard by a movie I wrongly assumed just wasn’t going to be “my thing.” Get Out is the best embodiment of this trend, a horror film that won over this horror-averse viewer with a strong, well-wrought conceit that put a new spin on what’s considered horrific.”

Matt Singer calls 2017 “the Best Year For Comic-Book Movies Ever” for ScreenCrush:

“The LEGO Batman Movie also set a tone for superhero movies that would continue through the rest of 2017: A willingness to stretch the boundaries of their respective properties. Cinema’s Batman had grown so dark that he was going around trying to murder Superman with bathroom appliances; LEGO Batman not only acknowledged Batman’s campy past, but it openly embraced it, bringing back previously forgotten villains like Egghead and Condiment King and ending the film with a cheerful musical number. That kind of elasticity of concept continued the following month in Logan, an X-Men movie without precedent in the franchise so far.”

Genevieve Koski, Scott Tobias, and Keith Phipps on The Talented Mr. Ripley (1999) and Call Me by Your Name for episodes 108 and 109 of The Next Picture Show podcast:

Tobias: “Ok, so this movie came out in 1999, which was my first year as a professional film critic, and so 1999 was a very special year for me in that respect, and also in that it was a particularly great year for movies, so I have a real fondness for Talented Mr. Ripley, which was one of my favorite films of a very special year. But I wanted to ask you all about your history with this film and how it holds up for you?”

Phipps: “Well, the year was 1999, and I was just able to hire a young film critic named Scott Tobias as a full-time employee. […]It was a great year, and this was part of it, and it came out pretty late in the year, too, right? There’s sort of an ‘And also, this’ quality to it, if I’m not mistaken.”

Koski: “It was like the Phantom Thread of that year?”

Koski: “One of the things that sticks out to me in this movie, is just how high the ambient sounds are in the mix. And so there’s this aural component — obviously, it’s a beautifully shot film, there’s this visual component — and, it’s so cliché to say it’s a “feast for the senses”, but it does kind of inundate all your senses. I guess not touch, but you could smell that apricot juice, right?

Tobias: “Totally, I wanted some of Stuhlbarg’s espresso as well, that sounded amazing.”

Pretty good birthday so far. Went to see MY NEIGHBOR TOTORO with the family and a guy wearing a Totoro costume recognized my voice from the @NextPicturePod podcast. I guess that counts as a good omen?

Film on the Internet: SMILE→ 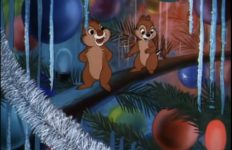