Grand Theft Auto: San Andreas is the pioneer. Like many things that got famous for popularising something, it’s somewhat fashionable to point out that none of the individual elements of GTA is completely original to it – Driver 2 had a wide open sandbox driving game with limited walking available in it, for example – but the first game synthesised these elements into something compelling and distinct, and each subsequent game added something exciting and novel; it was the third game that shot the series into the stratosphere when it moved from a top-down sprite-based perspective to a fully 3D environment. This reached its extreme in Grand Theft Auto: San Andreas, which threw in everything and the kitchen sink on top of the well-established gameplay principles. Gang warfare! Bicycles! RPG elements! More complex melee fighting! You could get hungry, fat, thin, muscular! Near infinite combinations of clothes! The story followed through on this; the beginning ten hours or so is a compelling riff on Boyz N The Hood, but it throws in everything from the Italian Mafia to redneck country racing the Yakuza to fucking Area 51 jokes. The result is a one hundred+ hour behemoth in a genre that rarely cracked twenty hours that covers a massive range of tones, styles, emotions, and ideas. The flipside of this inventiveness is sloppiness. Something you fundamentally have to accept about the series is that the gameplay is pretty shitty – there’s a whole lot of sloppy design (ranging from awkward controls to bad AI) that averages out into an entertaining experience, in which you are just barely stronger than the meatbags you’re mowing down. There are also a lot of really frustrating individual missions scattered throughout all the games. Some of them are bad because they’re poorly designed, depending more on luck than player skill. Some of them are bad because they’re genuinely bad ideas that don’t fit with the point of the game. You have to accept that there are low lows next to the high highs.

Saints Row 2 is the soldier. The first game was a generic-if-slick ripoff of GTA:SA, of which there had been dozens in the two years since that game had been released. The basic gameplay was objectively better, but it felt like it lacked personality. Say what you will about the sense of humour of GTA, it has a clear and sincere satirical point of view – it takes the most cynical point of view on every subject, but it reasons out why everything is shit. It mocks fast food restaurants by putting the real-world animal cruelty and poor health guidelines front and centre; it mocks jewellery stores by drawing out the misogyny of the advertising. The first Saints Row makes similar jokes, but in the manner of a child imitating South Park. It’s with the second game that it truly locks into being a successor to San Andreas, and it does so by just… doing the same thing, but neater and more efficiently. The gameplay is flawless, rewarding the player for being a violent, thoughtless asshole who treats everyone around them like ragdolls in exactly the way people have always played GTA and its ripoffs – two of the most basic gameplay elements are the ability to take human shields (and then either throwing your hostage at your enemies or just shooting them in the head when you’re bored of them) and kicking people in the crotch, neither of which ever gets old. On a macro level, the game knows this is about ruthlessly expanding an empire, and it gets that shit down to a science; the process of buying up businesses and completing side missions are both very simple and accessible nearly from the start.

The story is where the game’s purity and brilliance shows best. Like all great games, the story and gameplay are tightly wound together; like most great games, the story is an extension of the gameplay. Your protagonist – in a first for the genre, able to be male or female – enters the story with a full personality and a clear motivation: control the entire town through the Saints. The first game had them as not just a sidekick, but a sidekick to the sidekick; this time, they’re the boss of the gang and the one ordering everyone around, and it makes it utterly thrilling as they concoct schemes and bark orders – climbing to the top until they’ve wiped out all the enemy gangs and completely control the city. It also takes the time to create a more original and fun cast of characters with their own dynamic; the Boss has a bromance going on with Johnny Gat, everyone in the gang shits on Pierce because it’s funny, and there are things like how the Boss and enemy gang leader Maero have a rivalry in which either almost respects the other until they each go too far in hurting each other. This is a game that tries to create the experience of being a comic book supervillain in a cartoon city, and every choice it makes is part of that goal.

This is a pairing that shows how one way an artist can take influence – or two, I suppose. Grand Theft Auto weaves together many disparate sources into one work. Saints Row 2 has exactly one source, but it cleans that source up and makes it simpler and more efficient. It goes beyond ripping off the previous work and into a true continuation of it, in spirit if not in fact. Its new additions aren’t so much about reinventing the wheel as it is extrapolating further from the logic of GTA; one of the best missions in the game is when the Boss gets the idea to steal nuclear waste and inject it in the tattoo ink of one of their enemies, which is totally something you could have seen in a GTA game. And as I said, the game creates a cast of characters who develop a specific chemistry even as they’re riffing on types; the most iconic moment in the second game (at least based on the fact that it’s revisited in each subsequent game) is Pierce turning the radio to a love ballad and singing along off-key, to the outrage and exasperation of the Boss, and I have a lot of fondness for lots of little moments along the same lines – a mission opening in which Pierce lays out an Ocean’s Eleven scheme to steal a lot of money from a casino, only for Johnny Gat and the Boss to agree that it would be faster and simpler to go in with big guns and shoot up the place inelegantly, or an exposition scene in which the Boss plays skee-ball while talking and starts punting the balls at the target. These are the original things Saints Row 2 brings to an almost explicitly unoriginal concept. Another way of looking at it is that GTA reinvents the crime game genre even as it transcends it and Saints Row 2 uses the basic rules GTA laid out to create a unique community and personal history. 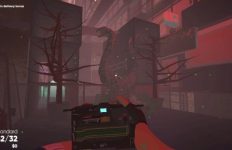