Browse: Home / Enter Plowman: THE PLOW THAT BROKE THE PLAINS

The Midwest United States, closer to both Washington DC and Hollywood than they are to one other yet far away from each, lay in ruins. Drought-decimated plains gave up their dirt to the winds and the infamous dust storms filled houses and tear ducts. Grit was inescapable.

Many packed up and headed West for better climes. Many stayed and soldiered on, starving while attempting to farm the unfarmable. Bam White was one of these people, a cowboy with Indian heritage battling futility on his North Texas land.

One morning a traveler appeared in the haze with what seemed like an even unlikelier task than producing food out of dust. His name was Pare Lorentz and he was tasked with documenting the devastation of the Midwestern farmer in the Dust Bowl. The geographic location of his assignment matched its nature. Lorentz’s idea had been bounced by Hollywood but he found sponsorship for the film from the Roosevelt administration. He wouldn’t be able to complete it without help from the film industry establishment on the West coast, but he would never have started without government backing in the East.

Lorentz wasn’t a filmmaker but he presented enough like one to gain his government contract. He started as a film critic with a special interest in the topic of censorship. He tasted his first intersection of  politics and film when he wrote positively about the New Deal and was fired from his New York job via telegram from William Randolph Hearst in California. He quickly dusted himself off and went west himself in a futile attempt to pitch a movie about the Dust Bowl to the studios. His efforts were noticed back on the other side of the country and Lorentz soon adapted his dream project to the needs of the US government.

For this film Lorentz envisioned something never done in peacetime: a government film with a wide, theatrical release. He had been adopted by the realm of government filmmaking – at the time mostly informative pieces where you point the camera at the thing you’re talking about and roll it – but Lorentz brought a head full of the narrative and experimental films he’d long been exposed to. His film wouldn’t just catalog the rise and downfall of the tortured prairie, it would make the audience feel it.

He’d been working his way down from Montana chasing dust storms and filming ranchers and farmers. He and his camera operators (all of them more experienced in film than he) collected dramatic wide shots of farmsteads buried under terrifying clouds of particulate and heartbreaking close ups of the dust seeping in around the windows, man’s construction powerless against the steady onslaught of earth. He’d line up tractors and choreograph their sweeps across the plain. The mechanical beasts would work into the dark, backlit and silhouetted against clouds of flying chaff.

He chased storm after storm, blowing with them into desperate communities, capturing all of it and wanting more. His weary crew threatened to mutiny if he didn’t produce some sort of a script or shooting plan. Lorentz refused. He had been given a $6,000 budget for the film. He would spend more than $19,000, most of it coming out of his own pocket (and that of his wife, actress Sally Bates). 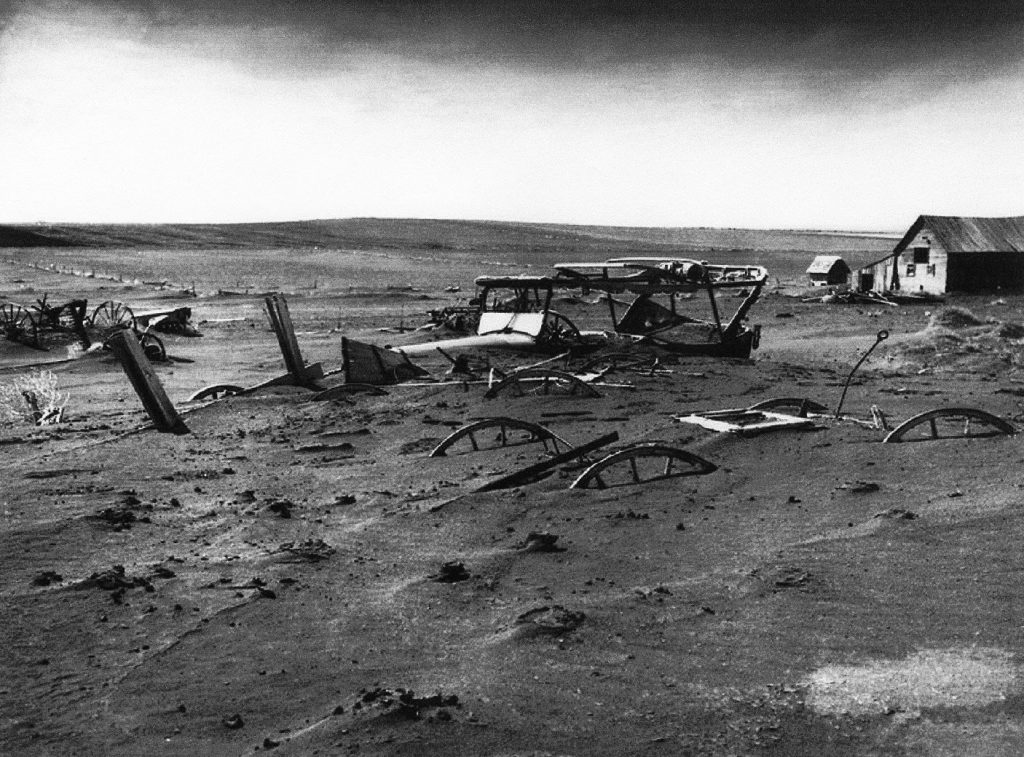 But who could deny the results? The powerful, militaristic style of the plow footage he would crosscut with actual military footage from The Great War. The rows of modern plows imitated the maneuvers of tanks. He’d get a score from Virgil Thomson with rousing trumpets, an orchestra swelling with pride and foreboding. “Wheat will win the war!” the narrator would shout over shot after shot of the ground churning. The humble plowman fed the Allies and handed defeat to the Kaiser. And Lorentz could make this epic happen once he could find a channel for obtaining war footage, currently locked away from him by the studios. Nobody wanted the government to compete in the movie business or to have anything to do with what they termed propaganda. Lorentz was kept in outsider status.

That was a problem for another day. Before the needs and enthusiasm of war tore the prairie and led to windswept ruin, Lorentz wanted the movie to show the courageous pioneer, plowing the plain without mechanical means. Lorentz had been led to Bam because he understood the man owned and could wield an old-fashioned horse drawn plow. Bam did and could and whatever misgivings or skepticism he had about the intentions of a coastal film critic and his seething cameramen evaporated when Bam was paid a handsome $25 for an afternoon’s staged work. Paying a man for pretending to plant his field, Lorentz prepared another American for the coming New Deal.

Later Bam would attend the local premiere of The Plow that Broke the Plains with his family and feel an immense pride in representing the hard-working man of the land on the big screen. Despite efforts to block its dissemination, the film really was a commercial success across the nation. Many of Bam’s neighbors would resent the movie and Bam’s participation. How could they portray their community as a bunch of dispirited victims? And to be seen as victims of their own excess! It was all government malarkey. Bam was ostracized by his small Texas town.

Lorentz would go on to make another successful government film The River about the Mississippi River with several tangents into conservation, hydroelectric power and other New Deal concerns. His relationship with the government would be severed after this film when Congress nixed funding for FDR’s newly established US Film Service, pointing out that the appropriations made for relief funds did not include movies. By now the free market was taking over, however, and Lorentz’s “propagandized” view of the Dust Bowl was now the thinking of popular entertainment like The Grapes of Wrath.

Now, months before this would come to pass, Bam watched Lorentz and his crew pack up their cameras, exchanged friendly waves as they left. Strange, this guy leaking pity and money as he zig-zagged across the middle of the country, confident in his ability to turn a region’s ongoing pain into larger-than-life drama. Bam stood in the unrelenting sun and cut a solitary and distinct figure as the pictures that would turn him into an icon trundled away in canisters. He turned and put his plow back into the barn.

The Plow that Broke the Plains is available in the public domain here.