Unflinchingly brutal and nearly tipping over into full-on bleakness, 4 Months, 3 Weeks and 2 Days is a masterpiece that a lot of people will understandably never want to watch.

Cristian Mungiu’s second film deals with the difficulties of procuring an illegal abortion in 1980s Romania, and, even though Mungiu stays narrowly focused on his central characters–the smart, practical Otilia (Anamaria Marinca) and her more helpless friend Găbița (Laura Vasiliu), whom Otilia is trying to help end her pregnancy–and their dilemma, his specificity and tight perspective helps us see the entirety of the world Otilia and Găbița inhabit. Late Communist-era Romania is a milieu of casual black marketing and barter. It demands a constant hustle to get anything–cigarettes, bus tickets, hotel rooms, milk–not just criminalized medical care. Otilia navigates through that world with a deftness that, in the unwritten laws of friendship, forces her to be responsible for the sheeplike Găbița. Again and again, over the course of the day the film spans, she will have to put herself out for Găbița. Sometimes it’s only an awkward inconvenience. Sometimes it’s an expense. And once, in a mostly off-screen but nonetheless unsparing case of sexual assault, it’s almost more than she can bear.

One of Mungiu’s best choices is to just let the camera linger on Marinca’s face, so expressive even in its seemingly impassive stillness. Most of the time, Otilia can’t afford to show her full reaction to what she’s experienced, either because it will compromise what she’s trying to do or because showing it will make her feel it even more, and that will shatter her. Marinca has the difficult task, then, of letting the viewer–the only real witness to what Otilia has gone through–see something of her feelings while the people around her do not.

There’s an especially stunning scene set at Otilia’s boyfriend’s mother’s birthday party, which she feels obligated to make an appearance at even though she was raped barely an hour ago and even though she’s desperately worried about Găbița, who is lying on a hotel bed waiting to start bleeding. The boyfriend’s family is nice, in general. They’re pleased to meet her. Their conversation is lively. But they exclude her–not her personally or individually, but collectively. They’re mostly academics, upper-middle-class and comfortable, and it becomes clear over the course of their dinner that to them, Otilia and people like her are just talking points in their arguments. Meanwhile, Otilia sits there. The camera holds on this young woman who is only half-listening to her life being flattened out in a political debate. The family bobs in and out of frame. We watch Otilia reach an invisible breaking point: the cost of being real in a world where you can’t openly acknowledge that.

4 Months, 3 Weeks and 2 Days deals with ugliness head-on, and it’s more interested in conveying realities than proscribing moralities. It attracted some criticism for showing Găbița’s expelled fetus, a bloody but all-too-distinctively formed shape, down to the indentations of eyes–since similar graphic images have been anti-abortion rallying points in the United States. But here, it’s just one more fact the characters have to contend with. The aftermath is ugly and personal and difficult–Otilia has to dispose of the remains in an apartment’s incinerator–but it has to be: it’s the natural consequence of the fact that the procedure itself was forced to be ugly and personal and difficult.

In the end, though, despite all this, the film doesn’t feel like an exercise in pure despair. Whatever the cost, things still get done, and it’s difficult to imagine that Otilia won’t go on to do and accomplish more. And Mungiu spends early scenes portraying a fragile but real sense of community among the university students, showing that there is a world Otilia and Găbița can return to, a world that’s worth living in.

4 Months, 3 Weeks and 2 Days is streaming on the Criterion Channel. 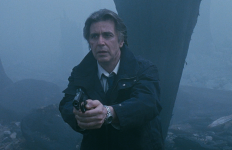