Browse: Home / Film on the Internet: DO I SOUND GAY? on Netflix

When The Boys in the Band was released in 1970, it received a backlash from the homosexual community who resented the catty, self-loathing, angry-as-hell attitudes depicted through wide swathes of a gay community. Coming the year after the Stonewall Riots galvanized all sorts of activist communities, claiming pride and confidence as gay qualities, The Boys in the Band faced an attitude that wanted to be all positive all the time.

David Thorpe’s new documentary Do I Sound Gay? shows that some of the tropes within The Boys in the Band haven’t dissipated over time. Within 3 minutes, David Thorpe announces that he lives with two cats, recently broke up with his boyfriend, and is unsatisfied with himself. The reason he’s unsatisfied with himself? He’s in his 40s and still single. In the next minute, he goes to Fire Island to “drown his sorrows,” and is annoyed by all of the other gay men being effervescent, so he calls all gay men “trying to sound like braying ninnies,” and becomes obsessed with the Gay Voice as his ultimate Achille’s Heel. And in the next, goes to see a therapist. No, not a psychiatrist, but a speech therapist to fix his manner of speaking.

The rest of the movie is a deep dive into David Thorpe’s insecurities and homosexual self-loathing, and a skin-deep dive into the construction of “the gay voice,” its societal purpose, its relation to social constructs of masculine and feminine, and its place in media and society. If I could make an edition of this movie that removes David Thorpe’s personal life while keeping the investigative journalism portions, I’d be a much happier man. There is a great movie hidden under all of this personal bullshit. There are a lot of great interviews with interesting people, from celebrities like Dan Savage and Tim Gunn to speech analysts and therapists. These moments make Do I Sound Gay? a requisite watch. There’s no other film on this topic that I can think of, and that makes it unique. But, the constant harping on the self-loathing, that is until the artificial requisite self-affirming finale, makes it a rough go. 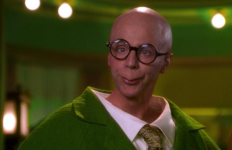