There are elements of Sam Raimi’s The Evil Dead that mark it as journeyman work, not only made on a shoestring budget but made by someone still getting a handle on his craft.  The characters are under-baked, with some of their decisions and understandings of the situation they’re in seeming random at best.  (Cheryl, when your hand suddenly becomes the pawn of demonic forces that make you draw the Necronomicon, I don’t know, maybe mention it.  At least briefly.)  Some of the humor feels unintentional–it’s hard to tell if Ash (Bruce Campbell) determinedly staying on the sofa while his friend Scott (Hal Delrich) fights a Deadite (Theresa Tilly) is a hilariously well-observed moment of paralyzed hesitation or a filmmaker realizing he’s not yet sure how to coordinate a three-person fight sequence.  And as weird as this particular sentence is, I’m not sure the film really earns that tree rape.  Basically, early on in the film, Raimi’s genius feels like a bucking bronco that’s almost but not quite out of control.

But as the film progresses, any real or perceived flaws become kind of irrelevant.  Because, you know, fucking damn.

There’s an intense alchemy in this movie between the inspired camerawork, the grotesque and compelling make-up effects, and the sheer wild inventiveness of Raimi’s imagination.  Cheryl (Ellen Sandweiss) repeatedly calling out the playing card suits and numbers is a blood-chilling bit of horror even before she starts levitating; Linda’s (Betsy Baker) doll-like posture as she sits on the floor and laughs madly is iconic and viscerally disturbing.  The woods surrounding the cabin are shot with a loving appreciation for their creepiness and the isolation and darkness they provide.  And that’s even before getting into the movie’s varied and effective gross-outs, where it hits its maximum, pedal-to-the-metal horror-comedy styling: when Ash gets sprayed in the face with decomposing Deadite fluid yet again, his traumatized, incredulous expression sells the moment completely.

Any weakness in structure works, unbelievably, to the film’s advantage, as–logically or illogically–things tend to happen either horribly all-at-once or horribly endlessly, with one exhausting, horrifying fight following on after another and poor Ash utterly unable to catch a break.  And all the while, the banging and rattling of the cellar door continues, with the imprisoned Cheryl gleefully laughing underneath as she–more or less–watches the movie along with us.  The Evil Dead reaches a sensory and horror overload that basically works as a manifesto for not only Raimi’s unique sensibility and enormous talent but also for the bucking bronco itself.  Sometimes things work best when they’re a little out of control. 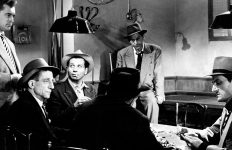 Film on the Internet: RIFIFI→