A naive young woman follows her husband to his small hometown.  A man must defend himself against accusations that he murdered his wife. The diary of a seemingly dead woman may hold the key to her demise.

All of these themes are explored in American director David Fincher’s latest film, Gone Girl, a twisty thriller about a young woman, Amy Dunne (Rosamund Pike) who mysteriously disappears and her husband, Nick (Ben Affleck), who becomes the prime suspect. Gone Girl deals with 21st century issues like corporate downsizing and the mass media, but its timeless themes of obsession, love, lust and gender relations echo back to many films of the 1940s.

For this article, we will look at two 1940s films that bear striking similarities to Gone Girl: Rebecca (1940), a psychological thriller directed by Alfred Hitchcock and Laura (1944) a film noir directed by Otto Preminger. All three films are based on best-selling novels, but I will not consider the source material in this article.

Warning: Spoilers for all three films are below.

When this film begins, the only thing that seems certain is that the beautiful and glamorous Rebecca de Winter is dead. Rebecca will remain in her grave throughout the film; in fact, Rebecca is the ultimate disappearing woman in 1940s cinema. Rebecca the person never actually appears in Rebecca the film ( a masterstroke by Hitchcock) although she is a palpable presence in each scene and all of the characters are obsessed by her life and the mysterious events surrounding her death in a boating accident.

Much like Gone Girl, Rebecca is a Cinderella story gone sour. The heroine (Joan Fontaine) is an orphan working as a lady’s companion when the film begins (the heroine is never given a first name. She is referred to as “Mrs. de Winter” or “dear” or “darling” throughout the film). She becomes acquainted with Rebecca’s widower, the rich aristocrat Maxim de Winter (Laurence Olivier), and after a whirlwind courtship they are married.

Once their honeymoon is over and they return to de Winter’s Cornish estate, Manderley, things quickly change for the worse, much as it did for the Dunnes when they move to Nick’s small hometown. Maxim becomes cold and distant, either wrapped up in running the estate, socializing with his old friends and family or, as the heroine fears, pining for the long-lost Rebecca. This leaves the heroine to spend long, lonely hours poking around Manderley where she is continuously undermined and tormented by the housekeeper Mrs. Danvers (Judith Anderson).

By the end of Gone Girl, The Dunnes are bound together not only by the traumatic experiences they have suffered, but also by the guilty secrets only they share. The de Winters are much the same at the end of Rebecca.  After Rebecca’s body turns up during a storm, the heroine finally forces Maxim into a full confession. Maxim admits that he despised Rebecca from the time of their honeymoon when Rebecca taunted him with the full details of her lurid lifestyle (alas, the production code prevents us from finding out just how lurid Rebecca really was). Years later, Maxim accidentally caused Rebecca’s death during a heated argument, and in a panic, disposed of her body at sea.

Rather than being repulsed by this confession, the heroine is empowered by it. During Maxim’s confession scene, Hitchcock frequently cuts to reaction shots from Fontaine that make it crystal clear the heroine is absolutely thrilled that Maxim despised Rebecca. For the first time, she begins acting like she is the true mistress of Manderley. Even her wardrobe changes from mousy schoolgirl attire to  glamorous power suits and hats that were favored by 1940s stars like Joan Crawford.

The heroine even takes a lead role in Maxim’s defense when he is suspected of foul play in Rebecca’s death. She coaches him on how to answer questions before the inquest and when he goes off message under harsh examination she feigns collapsing to stop the proceedings.(Strategic fainting was a favored deus ex machina in Old Hollywood. Even men collapsed, like James Stewart in Mr. Smith Goes to Washington, although male or female, nobody could hit the dirt like Lionel Barrymore. He received his one and only Oscar for A Free Soul (1930) because he could collapse so convincingly).

Much like Gone Girl, Rebecca ends on an open-ended note. Maxim is cleared of all charges and  Manderley has been destroyed by a fire. Once the credits role the de Winters will be forced to start a new life in completely new surroundings.

When this film begins, the only thing that seems certain is that the beautiful and glamorous Laura Hunt (Gene Tierney) is dead. Laura will certainly NOT remain dead. Her disappearance and eventual resurrection are the driving force in this twisty film noir.

Laura does share some plot points with Gone Girl (the disappearing woman, the diary), but the two films are most similar in the themes of obsession and the need to control those we love. In Gone Girl, Amy’s obsession with controlling her wayward husband leads her to fake her own death and implicate Nick through her diary. In Laura, it is the three men in Laura’s life that are obsessed with possessing her.

Laura’s on-again off-again fiance Shelby Carpenter (Vincent Price, in his pre-horror icon days)  wants Laura for one simple reason: Money. Shelby is a down on his luck rich boy who, rather than get a real job, is something of a gigolo to well-off women. Laura is a successful advertising executive with a beautiful apartment and a country home. For Shelby she is the glamorous goose that laid the golden egg.

Waldo Lydecker’s (Clifton Webb) obsession with Laura is total: He will never rest until he possesses Laura body and soul. Lydecker, a successful newspaper columnist and radio personality, is Laura’s mentor in the advertising business. He certainly wants to marry her — even today marriage is the ultimate legal form of possession– but whether or not he is interested in Laura as a lover is an open question. When Laura dates other men, he takes every opportunity to mock them. “The problem with you, my dear, is you think a strong back and long limbs are the measure of a man,” he sneers. This attitude could simply be a cover for his own inadequacies: Lydecker is twice Laura’s age and slightly built, but his abhorrence of sex seems to run much deeper than that.

Lydecker’s lavish home is full of priceless antiques (Preminger’s camera roams among the objet d’art in the film’s opening scene). In his own twisted mind Lydecker views Laura as his ultimate collection piece. He wants Laura to remain pristine, just like his Chinese vase and Roccoco clock, untouched by the “pawing hands” of mere mortals. Lydecker is so obsessed with this idea that he attempts to kill Laura twice. The first time he mistakenly kills another woman who was in Laura’s apartment; the second time he is apprehended by police before he can fire the fatal shot.

Police detective Mark McPherson has the most complicated obsession with Laura. When he first “meets” her she is seemingly dead. He gradually becomes obsessed with her, almost living in her apartment, while poring over her diary, drinking her expensive liquor and contemplating  her lovely portrait. “Congratulations, you’re the first person in history to fall in love with a corpse,”is Lydecker’s acid comment.  When Laura turns up very much alive, McPherson begins a complicated chess match with Lydecker for total possession of Laura. He even drags her to the police station under false pretenses just so he can have the object of his obsession all to himself. By the end of the film, McPherson has won. Lydecker is arrested and Laura seems poised to begin in Lydecker’s words ” a disgustingly earthy relationship” with McPherson.

Much like our other two films, Laura ends on an ambiguous note. Will Laura and McPherson marry? Will they be settle down to a normal life have children and be happy? The music swells and “The End” roles across the screen. We’ll never know.

Both Laura and Rebecca are available on DVD. 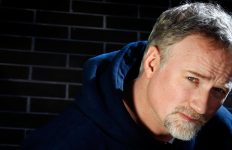 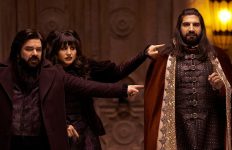 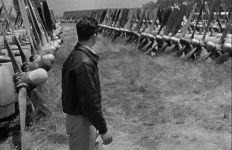