As noted in this weekend’s Dissolve On, Kate Erbland published a bombshell article at IndieWire in which Jasmine Baker accuses Harry Knowles of sexual assault back in 1998. Knowles, an Austin film critic famed for the early internet film geek website Ain’t It Cool News, was a frequenter at the famed Drafthouse along with Baker. According to Baker, Knowles “rubbed up against her buttocks and legs” and, at lease on one occasion, shoved his hand under her shirt. Baker also says that she had become friends with Tim and Karrie League in 1997, and had brought up the molesting behavior to them at the time. Their response? “Just avoid him.” In 1999, League’s Drafthouse hosted Knowles’ first Butt-Numb-A-Thon, and in 2005 they became two of the cofounders of Fantastic Fest (which happened this past weekend). Later, Jasmine Baker also worked at the Drafthouse for several years.

Mere hours before the article dropped, Harry Knowles categorically denied the events. His story is that he and Baker were confidantes and friends until 2002 when he broke up with her friend and they had a falling out. He made one tweet about the subject and…that’s about it. The remainder of his messages have been promoting Fantastic Fest. One should note that neither Tim League nor Drafthouse are involved with Ain’t It Cool News, with Knowles being the primary owner of the fading website.

Women haven’t been silent on this. Britt Hayes of ScreenCrush says he also sexually assaulted her. Other women have come forward with reports of Knowles’ creepy behavior in DMs on Twitter, in person, and other behavior. Some have pointed out these reports were long preceded by whisper rumors within the Austin film community (the same was said of Faraci), while pointing to Knowles’ overtly creepy reviews of Heroes (where he ponders whether 17-year-old Clare’s character will forever be a virgin due to…well…not going to repeat that one), Blade II (where he compares the experience to a detailed rambling of cunnilingus) and other overtly objectifying reviews.

We should note this is yet another report of Tim League dealing poorly with women’s reports of sexual assault in a year. This year, in the aftermath of Faraci’s “rehiring,” one woman revealed that League told told her to keep her story quiet and he would deal with it in private (almost echoing the same story reported by Baker). If this is true, this is yet another case of the male-dominated Boy’s Club coming to the rescue of a sexual predator.

In the aftermath of the Faraci accusation, Tim League stated he wasn’t attending Fantastic Fest, of which we must restate, he is a co-founder. In addition to that, this week, before the story dropped, somebody pointed out that Ain’t It Cool News was no longer a sponsor of Fantastic Fest, with Harry Knowles also not appearing at the festival he co-founded.

The actual content of Take It Out In Trade is currently in dispute. According to Rob Craig’s retelling of Rudolph Gray’s description of the film, Take It Out in Trade is a borderline hardcore film that displays Ed Wood’s usual sensitivity toward women by treating the final girl as a “prize” to be literally picked up and carried away from her parents. It also focuses on a harem of kept prostitutes who are treated as little more than property by their heroin-addicted mistress. According to a Facebook entry by Todd Brown, the Fantastic Fest programmer who quit over the Faraci debacle, there is even more violence aimed at the various women, including sexualized violence. It should be noted that Todd Brown was not at the screening. However, Annie Choi and Nathan Smith assert that Take It Out In Trade is just a Nudie Cutie with no violence and progressive attitudes toward the LGBTQ+ community. Whichever is true, detailed reviews of the movie are difficult to turn up considering it has only been shown one other time in the modern era and has not been released on DVD or VHS.

Even without the violence, it’s one thing to show a pornographic film to a willing audience who bought a ticket for it. It’s another to spring it on an audience who has no idea what they’re getting into. It’s still another thing to spring an old porno with old values on such an audience, and even another one to do it after a prominant figure involved in the festival has been accused of sexual assault. One would think that League, who sits on the board of the Austin-based American Genre Film Archive, would have switched out the secret screening for something a little less sexualized after the second revelation, but that gives League and Fantastic Fest too much credit.

Although Alamo Drafthouse is stating that they want to be having “important conversations” regarding the various allegations, neither of the presenters at this screening were representing Drafthouse or Fantastic Fest. One presenter was from Something Weird Video, who specializes in these bizarre cult films, and the other was from the American Genre Film Archive. Together, these two companies did help restore this formerly lost film. But, neither were equipped to handle a question about the appropriateness of this screening as the secret screening in the wake of these sexual allegations.

As a minor note, another semi-innocuous Fantastic Fest event has turned into a tragic reminder that sometimes things just turn into bad ideas after certain events. At the screening of The Square, the latest film from Force Majeure‘s Ruben Ostlund, they told the audience not to respond to a special event that followed. They brought up one of The Square‘s lead actors who proceeded to put on a display of escalating violence that includes flipping tables and throwing glasses as a display of masculine rage. What could have been an interesting display of what it might have been like to be in the middle of that scene turned into an even larger display of male entitlement through severe miscalculation.

There’s been a larger call to point out sexism in movies and actors (this was, after all, the year that Casey Affleck won an Oscar after being accused of sexual harassment on the set of the film I’m Still Here). Some men have expressed regret about supporting creeps they didn’t know were predators (C. Robert Cargill, formerly of Ain’t It Cool News, expressed regret for his being an unknowing cog in the system that allowed these perpetrators to continue their behavior). Others have expressed rage and are trying to figure out how to stop the system. I would think that the first step is not giving free passes, and the second is not being creepy yourself.

In related news, a month after closing to investigate their own management’s sexual improprieties, The Cinefamily remains closed. 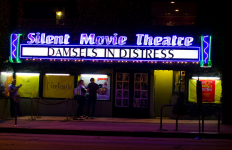