M*A*S*H is classic television that runs under a classic television principle: at the end of the episode, everything goes back to the way it was. It’s a situation comedy, and the only lasting consequences are when the situation changes, which in this case is forced upon the show when actors leave (or were pushed out by higher-ups, like McLean Stevenson). The only exception to this is the development of Margaret “Hot Lips” Houlihan. In season five, she chose to end things with Major Burns and marry some guy named Donald Penobscott, and after some time discovered her husband was cheating on her and chose to divorce him. From a dramatic standpoint, this played with a bunch of stuff that had been present in the series a long time; Margaret always wanted a traditional lifestyle and had a deep love for the military, so it made sense that she’d finally succeed at finding a military man worth marrying. And the series always presented men in general and military men in particular as horndogs always on the verge of fucking any and every woman that crossed their path, so it makes sense that Penobscott would destroy their marriage like that. The experience seemed to simultaneously harden and soften Margarrt, as she found herself questioning a lot of her principles and finding ways to adjust them without abandoning them completely, which lead to her genuinely finding ways to befriend the weirdos she was stuck with. It also rippled out to Burns, who was always at least a little unstable but genuinely lost his mind without Margaret’s stability backing him up.

But arcs in M*A*S*H were less about characters changing and more about the show’s attitudes towards them changing. The show is infamous for shifting from wacky comedy to morbid screed, but to my eye what it loses in pure comedy it gains in emotional complexity, and in fact its flaw isn’t shifting but in how it doesn’t go all the way with it. The series starts out with a simplistic anti-war anti-military attitude, where every authority figure is easy to take down both literally and philosophically. While the show never backs down from the idea that War is Bad, it finds room in its universe for kind and decent military leaders and vile actions on the part of people fighting against the War. The definitive example of its shift is in the two plots of Hawkeye performing unnecessary surgery on a general to stop him sending young men to their deaths. The first time it does this, it’s fool-proof ownage of a violent idiot. The second time, it’s as much a violation of Hawkeye as it is the man he does it to*. Towards the end, there are multiple fakeouts where it seems like people have finally lost patience with his antics, and it’s totally believable because we’ve seen how the rigid military discipline Hawkeye reflexively rails against isn’t necessarily useless and how the pranks and hijinks he gets into aren’t necessarily useful. Episodic, easy-to-syndicate television taps into the idea of literature, and what connects otherwise unconnected episodes of M*A*S*H are disparate emotions that add up into the figure of the finale, worthy of sympathy but not complete respect. The flaw of M*A*S*H is that it won’t follow its ideas into genuinely scary territory and allow anyone to genuinely loathe Hawkeye.

(*I am aware this was instigated by Mike Farrell passionately arguing that BJ would refuse to go along with Hawkeye’s scheme, but that would never have happened in the first place if the writers hadn’t gone out of their way to make BJ as opposite to Trapper as possible)

Where these two ideas – Margaret, the woman who gains our respect, and Hawkeye, the man who loses it – come together is in their relationship. It’s fascinating to me how Hawkeye’s hidden strength is Margaret’s most obvious feature, and vice versa. The first thing one notices about Hawkeye is his wit, his relentless ability to jump from one idea to a seemingly unrelated one; you can see how being trapped in a grey muddy ditch for three years has been slowly driving him mad, sending him into a frenzy whenever something like a newspaper or a book comes in and gives him any new kind of information to play with. And his vivid sense of emotion is something everyone picks up on pretty quickly – usually, either his moral rage or his romantic passion, but he can succumb to platonic love, humiliation, or terror, letting it consume and drive him every step he takes. Conversely, the first thing visible about Margaret – and this is true no matter what version of her we’re looking at – is a fierce hypercompetence. It’s like there’s a database in her head filled up with all the Right ways of doing things – of folding sheets and cleaning floors and applying bandages, all those things that keep a hospital standing.

But Hawkeye has that hypercompetence too. He’s less visible about it, less inclined to bark orders, less upset by disorder or mistakes, but watch enough episodes and you can see how he’s almost shifting into gear, spotting what needs to be done and doing it (it’s most obvious when wounded are coming in and he does actually bark orders). On one level, it feels like an extension of his wit and morality – like that big list of random information he has happens to have a bunch of genuinely useful information too, and that useful information is what allows him to actualise his morality (“I want to prevent young men from needlessly dying, and to do that I need to connect the knee bone to the red thing”). As you might expect, I think Margaret’s sillier, warmer side is an extension of her best qualities too, especially after her divorce shakes her out of her groove. It’s as if Hawkeye’s antics enter her database, and she starts experimenting and playing with them herself – pranks become as much a tool and skillset as nursing. And her sense of Things That Work and Things That Don’t flows down into her emotions. She has a binary sense of Good and Bad, less emotionally aware than Hawkeye but also less likely to wallow in an emotion, and we see her work through what’s Good and Bad over and over.

Put them together and you have something strange and special that almost manages to escape the grasp of the writers and directors. Their respective journeys flow down into their views of each other, evolving from firm enemies into a kind of mutual awe. They come to recognise each other’s skills and are equally astounded that the other can do what they do so well and for so long, at least up until someone goes too far again and leaves them confused and exasperated. Why can’t Margaret just let go of military protocol and cut everybody some slack, including herself? Why can’t Hawkeye keep his mouth shut and just do his job? One of the most significant lines in the whole show is Margaret, seeing Hawkeye struggle with being thrust command, and quipping “If only Frank Burns could see you now.” She doesn’t say it to be mean, she says it because Hawkeye is finally learning the value of military discipline. And yet, even when they lose their temper with each other, there’s a sense that neither Hawkeye nor Margaret would change the other for the world, recognising someone especially gifted.

Obviously, types of people act as wish fulfillment. Quite aside from Hawkeye and Margaret getting to be impossibly witty and charming for us, it’s flattering to think of ourselves as people with not just skillz but layers of skillz, some that are very visible and some that most people wouldn’t see. But there are also types of relationships that fiction can simulate. More than one white guy on the internet has wanted to find the Joker to his Batman (or vice versa). Hawkeye and Margaret are two people who clash over their surface details only to discover some surprising similarities. How wonderful would it be to get to be the person who sees the potential in someone that nobody else does, and to have someone see your own? To initially clash with someone only to win them over to becoming one of your dearest loved ones? To instigate as much growth in them as they do in you? I know I have different facets of their relationship in mine; one of the pleasures of approaching thirty is discovering things in me I admired in my best friend since high school, and seeing him cautiously begin doing things I mastered long ago. Fiction can show us who we could be, and sometimes it can show who we could be to each other. 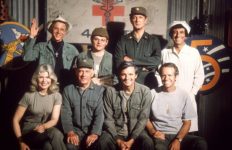