Browse: Home / I Haven’t Seen It, Because It Begins With “T”

I’ve talked a bit about my library project. Referenced it in passing. However, I haven’t talked about it much here, and I’m not sure I’ve ever explained it fully. At least, not to my readers. My friends, and the librarians, know about it, but I’m not sure even most of them know why I’m doing it. Then again, some days, I’m not sure myself.

What I am doing, in a nutshell, is watching my library’s entire DVD collection in alphabetical order, at least watching everything that looks interesting. If I’m reading my past reviews correctly, I wasn’t reviewing them very reliably at first. I seem to have started with Angels With Dirty Faces, though that can’t be right, because there are a lot of movies before it in the catalog. At any rate, that puts me in February of 2007 when I began. I was still skipping forward on Netflix in those days, and it took until around Bad Day at Black Rock before I got really regular about writing reviews. We’re almost eight years on, and I just this week dumped a bunch of stuff on my list starting with “science.” So, I don’t know, three or four years to go?

The obvious question is also the hardest to explain. Why am I doing this? This is insane, and I know it. Ten years or more of movie-watching? Watching such disparate stuff as The Last Man on Earth and A Fistful of Dollars? Why would you do that? Yes, okay, this is how I saw The Godfather. (All three movies in one day, which for the record I do not recommend as the way to watch it for the first time.) On the other hand, it’s how I saw The Man From Elysian Fields. Doogal, even. And that doesn’t even get into the made-for-TV stuff, because I’m watching that, too.

So yeah, okay, I actually am crazy—and that actually is part of it. For one thing, when I started this project, my boyfriend was in Iraq. I needed very much to think about something that wasn’t the news. Plenty of people were telling me that the last thing I should be doing was watching the news at all. For another thing, in the years since then but before my son was born, the project put stability in my day. Every day (I’m down to five a week now, and I still spend a lot of time playing catch-up), I watch a movie and write a review. That was what my day involved. Every day when I woke up, I knew I would be doing that. And the nice thing was that I didn’t even have to think about movies I wanted to see. The alphabet provided them.

Another curious thing I’ve discovered is that, when I’m adding movies to my Netflix queue, I’m not good at remembering movies I’ve always meant to see. Movies I want to see in that moment, sure. But ones I’ve meant to see since 1987? Not so much. I’ve looked over those early reviews, and while there were movies like The Seven Samurai in them, you know, I didn’t get to The Godfather. Or even the six other Kurosawa films I’ve been meaning to watch for years.

In many ways, this has been a voyage of discovery for me. Did you know, for example, that there are an awful lot of French movies starting with the letter “C”? It took me thirteen months to get through the letter “M” alone. The letter “S” takes up about five percent of the catalog, and about ten percent of that is things starting with one of only about a dozen words. (“Scooby.” “Spongebob.” “Song.” “Science.” Like that.) Since our library’s software no longer automatically sorts alphabetically over five hundred items, I now know the DVD collection better than anyone else, including people who work there. Because, yes, I now go through the catalog manually when I hit a new letter. It’s a pain. But after all this work, I can’t bring myself to stop now. Did I mention crazy? 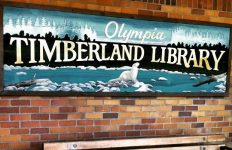