Every once in a while, when a conservative is getting mad at feminist influence on popular culture, they’ll go on about all those dumpy, incompetent sitcom husbands with attractive, hypercompetent wives. And I mean, let’s leave aside that it’s not really so common a trope as all that these days; I don’t watch a lot of current TV, but I’m having a hard time thinking of something that’s still on the air that fits that description. The closest I can think of is One Day at a Time, and Penelope and Schneider are definitely not married. And he’s not dumpy. And, sigh, that was canceled anyway.

More to the point, though, that’s not any kind of feminism I know of. There’s a saying that the reward for a job well done is another job—which means these women are all doing all the work, or at least most of it, while their husbands are usually still considered the head-of-household. Many of these women themselves put in full days of work only to come home to do all the housework and deal with the children. It would quite frankly be exhausting to be that kind of responsible. It’s one thing to want to be financially independent and capable of handling everything yourself; it’s another to have another adult expect you to do all of your own work and all of theirs, too.

In a way, it’s no better than its contemporary trope—and we’ll be talking about its age in a minute—the competent man and his ditzy, useless wife. I Love Lucy tended to fall into this one, is probably the quintessential example of it, and lets you see exactly what I mean. The comedy in that show was watching everything go wrong at Lucy. Ricky told her she wasn’t able to do things, and he was right. I haven’t watched the show in years, so I don’t know what Lucy was supposedly doing before she married Ricky, but she might well have counted it as a victory to successfully put her clothes on without accidentally cutting her own head off.

The thing people who try to blame feminism for the trope will try to tell you is that this is a modern concept. And it’s so obviously not. Plenty of early sitcoms used the idea. That it was in The Flintstones of course tells you that it was in The Honeymooners. Meaning it goes back literally decades and before modern feminism. Not feminism, but TV as a whole doesn’t go back before feminism! And you can probably find examples of the trope in literature going back centuries, and I’d even argue that Zeus and Hera tend to be an example of it, meaning it goes back literally thousands of years. But in TV, it’s definitely contemporary with its opposite.

What would a feminist couple on TV look like? I mean, first, define your version of feminism. It’s not as unified as all that. For me, though, it would be an equal partnership. There would be some ways she wasn’t perfect and some ways he wasn’t perfect, and their imperfections would work together. Honestly? Some examples of feminist couples for my money include Hal and Lois from Malcolm in the Middle, Rob and Laura from The Dick Van Dyke Show, and Phryne Fisher and Jack Robinson from The Miss Fisher Mysteries. You will notice those are three very different couples, but what they have in common is mutual respect. And when the couples have problems, it’s because their respect and communication break down.

See, that’s another thing—those men aren’t communicating with their wives. Their wives aren’t communicating with them. The men probably complain at least once about how they’re expected to talk about their feelings, but really, truly sharing feelings is an important part of things in an equal couple, because how else are you sure everyone feels that the relationship is going well? So yeah, there’s still room for wacky misunderstandings in a feminist sitcom, because misunderstandings are an important part of, you know, life, but a show built on wacky misunderstandings between partners probably won’t be feminist in its very nature.

Similarly, there’s no room for shows where the partners don’t seem to like each other, which is strangely common in in sitcoms. Why did you get married, why do you stay married, if you don’t like each other? People on a feminist show would be married because they love each other. I don’t think everyone’s partner is also their best friend—and I do believe it’s unhealthy for your partner to be your only friend—but you should only be in a relationship with someone you could also be friends with, because why do that to yourself?

But I can also guarantee you that some feminist will disagree with my take in some way, because feminism isn’t a single thing. There are probably even feminists who think the relationships in question are feminist—among other things, because they haven’t considered that it’s clearly a male fantasy; if Homer Simpson can attract a Marge, surely any other schlubby guy can attract a woman to good for him, too! 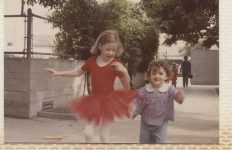