Browse: Home / Kill Bill VS Once Upon A Time… In Hollywood

SPOILERS for Once Upon A Time… In Hollywood ahead.

These are, perhaps, the two most self-indulgent movies from a director whose name is practically synonymous with self-indulgence. Kill Bill is ripped from Quentin Tarantino’s heart, both in the sense that it’s fueled by an emotional turmoil he was going through at the time (beloved Soluter Son Of Griff has suggested it’s a love letter to his mother raising him on her own; I’ve heard the man himself say it was partly inspired by his sudden and overpowering desire to become a father; I theorise it was a reflection on reaching middle age) and in the sense that it was filled with references to practically every single movie and TV show he had ever seen and held onto. Once Upon A Time… In Hollywood is Tarantino’s love letter to an age that has passed; it’s been criticised for being nostalgic to the point of bitterness, although not only do I not pick up that, I cannot see Tarantino being horrified that the movies of the Sixties turned into the movies of the Seventies. What fascinates me is that Kill Bill is this messy, deliberately contradictory work in which you must accept that the world we’re operating in makes no sense, while OUAT…IH aims for an almost documentary-like verisimilitude in which, the ending notwithstanding, we are being asked to believe that Rick Dalton and Cliff Booth were real people who were really moving around in Hollywood in 1969, and backs it up by fitting them in that world as smoothly as possible.

Kill Bill takes glee in tripping up the viewer’s genre expectations; it takes place in a world where every genre you can possibly think of definitely happened, even the ones that contradict the other ones. Son Of Griff has said (and I’m paraphrasing here) that Tarantino was blending together imagery from the old myths to create a new one about a single mother; the movie blends together moments from kung fu films, Douglas Sirk melodramas, westerns, biker films, anime, and so much more to give us a very specific and entirely original emotional arc. One one level, making logistical sense would not only not help that, it would hinder it – we would spend more time getting bogged down in trying to justify what we’re seeing and have less time to feel what we’re supposed to be feeling. More importantly, though… we don’t want it to make sense (‘we’ in the royal sense). We want to effortlessly float through this world without having to do the work to justify it. It’s freeing to simply soak in the imagery without it really making any sort of sense. OUAT…IH has a different goal, or rather it has the same goal only moreso. This is a movie that’s trying to capture one very specific arc, and it’s an arc that real people actually went through. Rick Dalton is going through the story many actors of that specific time and place were going through: he becomes famous as a lead on a TV Western, and as the genre declines, he tries shifting into movies, appears as the lead and supporting in a couple of dozen films. He never quite manages to break through, and after falling back to guest starring on a few different shows, he ends up going to Italy and starring in a few Westerns.

Rick’s story has its specifics and we care about him as an individual, but he’s also not particularly unusual and a clear part of a much bigger system; it makes an emotional sense that this guy’s whole career could have passed by and we didn’t notice. My main complaint about Django Unchained is that it felt like Tarantino couldn’t quite get the individual beats to fit together in the arc he was trying to shoot for, and that’s not a problem at all here – Rick’s story is an ancient* one that plays out completely plausibly for the time and place he was operating in. Tarantino’s references cross from fun and into an absolute and all-encompassing understanding of a System, and he can find Rick Dalton in the tiniest gap within that system (if the ending is different, it’s only because Tarantino knows that introducing even one new element will change the whole system in ways we don’t expect). I don’t think this is Tarantino’s final statement in that I don’t think it really, specifically says anything; I do, however, think it’s the end result of Tarantino’s whole mode of thinking – maybe not his best film and certainly not my favourite of his, but the full maturing of his filmmaking, his best possible self, and a good place to leave us on. 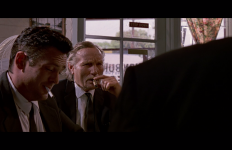 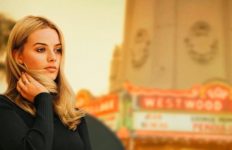 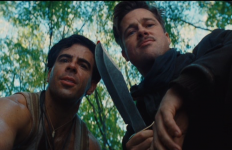