Hollywood is wonderful. Anyone who doesn’t like it is either crazy or sober. — Raymond Chandler

There was a desert wind blowing that night. It was one of those hot dry Santa Anas that come down through the mountain passes and curl your hair and make your nerves jump and your skin itch. On nights like that every booze party ends in a fight. Meek little wives feel the edge of the carving knife and study their husbands’ necks. Anything can happen. You can even get a full glass of beer at a cocktail lounge. —Raymond Chandler

I do not like living in Los Angeles. You can’t, if you get heat sick. I am happier living in a cool, rainy place full of trees and green moss, and while you can get just about anything you want in LA, you can’t get that. Growing up, we didn’t even have air conditioning. So I’m not inclined to write much about how Los Angeles is Heaven. However, as a native Angeleno, I have long been aware of how many other people see it that way—and how many people see it as Hell. A lot of people write about New York as Heaven, too, but they’re a lot less likely to actually have demons walking its streets.

Los Angeles has been populated by someone or other for thousands of years. Before the Spanish came, the largest settlement in the area was a town named Yaanga, possibly under what is now Union Station and likely somewhere near where the Spanish would build their mission. (Delightfully, the name appears to mean “place of the poison oak” or similar.) It turns out that the answer to my longstanding question of “why would you put a major city there?” is, in a nutshell, “they found oil.” Which does make a certain amount of sense. By 1923, a quarter of the world’s petroleum was produced there.

Petroleum production has dropped off since then, I believe, and certainly it’s been ramped up other places, but by 1923, LA’s next big industry was in place. People getting away from Thomas Edison’s patent enforcers founded the movie industry there. This may be the era when the city’s varying portrayals crystallized. In the movies, people saw LA as a paradise, a perfect home to escape to when chasing their dreams. For many of its residents, the reality was darker and grittier, a city with too little water, too many earthquakes. Corruption. Racism. Greed. And, yes, the actual chance that you could be discovered at Schwab’s.

Real? Realer than you’d think. While goodness knows there’s plenty of Hollywood nepotism, and you could write thousands of stories about assorted struggling actors, screenwriters, and so forth who were mistreated, there are also stories like Edward Furlong, a grade behind me at Eliot Junior High and honest-to-Gods, I-heard-it-from-his-own-mouth discovered at the Boys’ Club in Pasadena. It was a one-in-a-million chance, but everyone dreams it’ll be theirs. The dream keeps the view of paradise alive.

But all those dreams, all those movies, do put a certain plastic coating over the place. A city built on illusion is a city that is going to be artificial. And I am not the only person who dislikes the bright, hot weather; it’s not fully true that Los Angeles is a city without seasons, but it is true that its seasons are not the ones you’d expect if you’re coming from somewhere more temperate. An artificial city can easily be turned into a facade for something far darker. And if it’s actually named “the angels,” there’s nothing more artificial than populating it with literal demons. In Buffy the Vampire Slayer, the entire city is literally sent to a Hell dimension.

At its heart, for more than a century now, Los Angeles has been a city of dreams. In every sense. It has the surrealism of actual dreams. The aspirational kind of dream. And, yes, the nightmares; small wonder it’s one of the cities of choice for pulp detective stories, after all. We don’t have time to get into everything dark about the city. No one does. If it is less frequently seen as a literal stairway to Heaven than a literal portal into Hell, well, you’d figure Heaven would have a lot less sin than you find in LA. It’s still seen as a golden city.

I don’t ever want to live there again. But there’s a reason I keep thinking about visiting, and it’s not just to see those I love who are happier there than I was. My own Heaven may be here in the rain forests of the Pacific Northwest, but I’ll admit there are plenty of second choices back there. For those who don’t like rain, I can see why Los Angeles would be closer to Heaven than Washington State is.

Help me fund that excursion into the City of Dichotomies by contributing to my Patreon or Ko-fi! 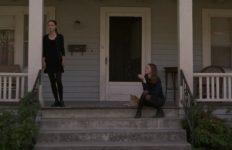