Making an auspicious feature film debut with Nine Days this past year, Edson Oda appears poised to carve out a niche with handcrafted tales of metaphysics. Here he tells the tale of a cowboy assassin sent to kill Death himself, though the story is less the star than the method.

As is often the case, it’s not the what but the how of the movie that stands out, hands flipping storyboard panels and revealing the dialog with a bronze letter-opener. It’s a bit talky and this convention becomes old ten-gallon hat even during the scant five minute runtime, particularly since the dialog is also delivered in voiceover and subtitles for English speakers. But it sets up a pattern that makes the subversions pop: A strip of photographed memories running horizontally over a sweating face (the hands dab at the sweat with a hanky, nice touch). A close-up rendering of a shaky hand gets literally shook before dropping to the table. The blood-soaked and fiery conclusion provides an extra thrill for having the actual image soaked and set aflame, the kind of tactility usually reserved for explicitly experimental fare.

But what reveals Oda as a filmmaker rather than a clever arts and craftsman is the attention to pacing. “Malaria” is different from other one-shot wonders by having instant access to wides, two-shots, and close-ups but no motion. The frames may be static but Oda transitions between them with attention to how long they’re available for our perusal, speeding and slowing the footage as necessary to adjust the lengths of the “cuts.” A close-up of the eyes may get flipped away, appearing only long enough to show a character looking up, or it may stay on the table and draw out the tension. Plus the visible parts of the table itself and its Old West appurtenances set the tone from the outset – and bonus for the number of the props that come into play.

It’s easy to image the higher budget version of this with day-playing actors on a set in their costumes, film cutting between those storyboarded shots, the story coming and going without our noticing. The “Malaria” presented here, I would argue, offers something far more memorable. 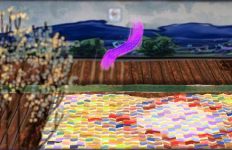