Kirk Douglas was the fifth person I wrote about for Celebrating the Living, because I was convinced he would drop dead at any time. That was a little over four years ago. He is one of the very few people I’ve written about for the column about whom I subsequently said, “Yes, but I still have to write an obituary.” Sure, he hasn’t done anything new in the days since then—well, for one thing, he’d had a stroke in 1996 that limited his ability to speak. But jeez, how can you not talk about the passing of a legend?

He was born a ragman’s son in a Yiddish-speaking household in Amsterdam, New York. He worked many, many jobs over the years to support his family, and in 1941 joined the Navy. He was medically discharged in 1944 and went to New York to act. Eventually, childhood friend Betty Joan Perske, by then Lauren Bacall, suggested that Hal B. Wallis check him out. Which he did, launching a decades-long screen career. He doesn’t seem to have been the nicest guy going—though I can’t find any substance to the rumours that he was the one who raped Natalie Wood—but he was definitely a screen presence.

I mean, we could be here all day talking about his performances. Not just because he acted in 74 movies and twenty TV shows, but because he was good. Over-the-top, sometimes, yes. Good Lord, yes. No one can really accuse the man of subtlety in a lot of his performances. But who cares? He genuinely was one of the most powerful actors in Hollywood. You never had any doubt that he was inhabiting his roles, whether it was Spartacus or Ned Land or Doc Holliday.

Yes, okay, I grew up hearing him sing to a seal. That was where I first encountered him, and I’m sure I’m not alone with that. And I don’t think it’s a bad thing, because it means I knew who Kirk Douglas was when I was a child. Maybe eight? Not sure, but young. And nobody was going to show me Young Man With a Horn in those days. I’m slightly more ashamed that probably my second-favourite of his movies is the Sylvester Stallone mob farce Oscar, where he plays Stallone’s father.

Of course, Douglas is survived by his son Michael. And two of his other three sons, Joel and Peter. (Eric died in 2004.) But also seven grandchildren and one great-grandchild. And also his second wife, Anne Buydens, who relatively recently admitted that she’d been lying about her age and had not been born in 1930 after all. She was born in 1919. She and Kirk Douglas married in 1954. 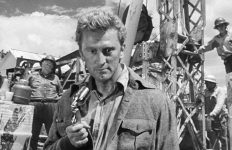