He was on the schedule for November. As I’ve said before, it’s the risk you run when you’re scheduled (checks calendar) at least in part for two years in advance. (The last person on the schedule right now is for March 20, 2024, but I haven’t shifted around to make up for Warner’s death yet and there are gaps well before then for things like my three specialty months a year.) And of course, he was eighty, and the schedule is full of people who are old and/or in ill health. He’s not the first person to die sitting on the schedule, and he won’t be the last; Gavin MacLeod was literally six weeks out on the schedule when he died.

I’ve talked before about Litmus Actors, and David Warner was one of those. He’s just always going to be Dillinger/Sark from TRON to me, because you can’t help your formative years. It’s also an underrated performance in an underrated movie, in my opinion. It’s technically innovative, of course, though far less of it is computer-generated than people realize, but it’s also an interesting examination of our relationship with computers. That Dillinger would come to be afraid of his own program, that his program would be able to destroy his life if he didn’t do its bidding, isn’t so much prophetic as logical extrapolation, but still.

His other most iconic role to me is also science fiction. He’s one of many who put on astonishing amounts of latex for the series. Specifically, in 1992, he played the Cardassian Gul Madred. And if the name isn’t familiar to you, Picard’s response to him is. Because Picard’s response to him is, “There are four lights!” It’s a grim, chilling performance, and while I won’t say no one could have done it as well as Warner, certainly few could. He is frankly magnificent—and at bare minimum, you need someone who is a talented enough actor to go one-on-one with Patrick Stewart, and not everyone is capable of that.

Of course, he was also Thomas Eckhardt on a few episodes of Twin Peaks, in the uneven second season. He was Ra’s al Ghul in Batman: The Animated Series. He did some Doctor Who, if that’s to your taste. He was Lord Downey, head of the Assassins’ Guild, in the BBC production of Hogfather. He was Jack the Ripper in Time After Time. In short, he was an easy choice for a villain, because you didn’t have to work at menace if you cast David Warner. He could do that part all by himself, and a good script was just gravy at that point. Though goodness knows he got more than a few good scripts in his career.

He could also do comedy, when he was allowed to; another role I’ll always love him for was The Lobe on Freakazoid! The Lobe desperately wanted to be scary and intimidating, but he had two problems. The first was that basically his head was a large, exposed brain, and that’s less scary the longer you think about it. The second was that, you know, he shared a world with Freakazoid. He’d just be building up a good head of menace when he’d actually have to deal with the show’s main character, and you can’t be ominous around that guy. Even if you’re David Warner. 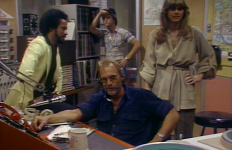