We binged all of Luke Cage as quickly as we could, cramming in episodes while our kid was in preschool and after he went to bed. I’m going to level with you; we loved it. Yes, all the way through. And I heard all the complaints that it was slow, that the villains were bad, whatever, and I don’t agree. That’s okay; that’s my personal opinion, and you have yours, and that’s fine.

But the thing that struck me was the “it’s slow.” I’m not sure where that comes from, honestly, but I have a guess. I think it’s because a fair amount of the story was Luke Cage not involved in situations of beating people up. There was quiet banter with friends. A guy working two jobs because he had to. A mentor just kind of giving advice. A guy going about his life, putting it in to some kind of order.

Having powers would change your life, true, but that doesn’t mean your life would stop. You’d still have to pay your bills. You’d still have to deal with your family. You’d still have to do all the things you had to do before you got your powers. We get around a lot of that by making our superheroes independently wealthy orphans or what have you, but that’s not enough, really. Or anyway, it starts raising more questions than it answers—do millionaires attract mutation?

So yeah, I want to see Luke Cage rushing from one job to another. I want to see Matt Murdock struggling to keep his law practice and his friendship afloat. I want to see Clark Kent trying to find time for a quiet evening at home with Lois. And I don’t think we’re entirely going to break through the limitations people believe are involved in superheroes’ stories until we start writing stories and producing stories about that.

I mean, I’m biased. I wrote a book where I sent some superhero characters on a road trip where they basically never used their powers. They were just people doing a thing, because that was the story I had to tell about them. I don’t see any reason why we can’t explore the personalities, and I think that’s what these low-key moments are doing. We can’t simultaneously beat movies up for creating one-dimensional characters and denigrate the moments that are creating more personality. We know more about Bruce Wayne as a person when we see him in a moment of quiet discussion with Alfred than when we see him beating up a bunch of thugs.

In the end, the way I look at it is that these characters are people, too. I want to see them act like people. And if that means the action scene only goes on for five minutes instead of twenty, frankly, I think that makes for a better movie anyway, whether the people involved technically have superpowers or not. 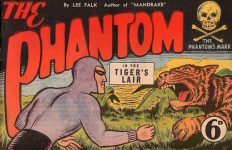 Year of the Month: David “Rosy Fingers” McFarlane on THE PHANTOM→