In 1934, It Happened One Night was released. It would be nominated for five Oscars and win all of them, the first of three movies to sweep what’s called “the Big Five.” It won for Best Actor, Best Actress, Best Adapted Screenplay, Best Director, and Best Picture. (Interesting that all three movies to do that won specifically Adapted Screenplay.) For all that, it has had a strangely limited cultural footprint. About the only lingering remnant of it in modern-day pop culture is not the Walls of Jericho. It’s not Clark Gable’s stern lesson on how to dunk a doughnut. There is some remnant of the hitchhiking. But mostly, there is Bugs Bunny eating a carrot the way Clark Gable did. Which most people don’t realize is a reference to anything.

Take, for example, Foghorn Leghorn. He was created by Bob McKimson. His first appearance was in 1946’s “Walky Talky Hawky.” Henery Hawk tried to eat him. He went on to appear in 28 more solo shorts and most recently (apparently; I haven’t seen it and don’t plan to) in the new Space Jam. And what basically no one remembers anymore is that he’s a parody of a character called Senator Claghorn. Claghorn first appeared on Fred Allen’s radio show and was from what I can tell popular there—certainly enough so that there’s a movie of his called It’s a Joke, Son! No one remembers this; if you asked pretty much anyone, they’d assume that’s the title of a Foghorn Leghorn short.

It’s not just Warners cartoons that have this factor behind them, but I think they’re the two examples that are most notable to the general population. I think that’s in part because Warners cartoons were unafraid to draw on pop culture in that way. Both major animation studios did cartoons that were just celebrations of pop culture—my only awareness of the Ritz Brothers comes from the Donald Duck short “The Autograph Hound.” But what Warners did more was let pop culture into their regular cartoons. Sometimes, that was more successful than other times, but in at least those two instances, it was really successful.

Honestly, there are probably other times that I don’t realize myself because I’m not familiar with the original reference, either. Of course there are. I’m not familiar with all of pop culture; no one is. Still, it’s an interesting phenomenon. It’s definitely unusual to think about. There’s a lot of things in pop culture that are referencing other things; that happens all the time. But the orphaned parodies are their own specific cases and worth noting.

Throw me a carrot by supporting my Patreon or Ko-fi! 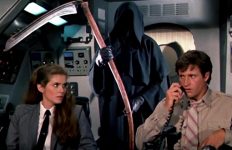 Film on the Internet: AIRPLANE II: THE SEQUEL→

What the F? Babalugats on DISASTER MOVIE→