Poltergeist has a weird problem in that the film doesn’t seem to believe in ghosts. This 2015 remake of the 30 plus year old original does have one strikingly positive quality. It underscores how brilliant the Paranormal Activity series and The Conjuring were in handling the haunted house genre.

Disclosure: I was in Junior high school when the original came out and even remember the theater I went to. To this day it’s remarkable how for how scary and traumatizing it was under a PG rating, with very little blood and no death scenes. Its wasn’t flawless. But standing next to its ill-advised remake under director Gil Kenan, it’s a masterclass in horror.

This 2015 version is an off-key cover of the original and suffers mostly by not being scary. And this: the film doesn’t believe in the story its telling.

Our first meeting of Eric and Amy Bowen (Sam Rockwell and Rosemarie Dewitt) and their family is during their first walk through of a suburban house they’re buying. They fiddle with appliances while Eric accidently confesses to the realtor he’s between jobs just as Amy jumps in reassuring that they as a family will make this work.

The family doesn’t pay much attention to their young daughter Madison (Kennedi Clements) who’s mighty chatty with imaginary friends standing on the dark side of closed doors or from within a flatscreen tv. Neither are they bothered by the mournfully weeping willow tree next to the house which only draws the attention of son Griffin (Kyle Catlett) because it peers down predatorily through a skylight above his bedroom. Of course they pay the least attention to the oldest teen Kendra (Saxon Sharbino) because, well, she’s a teen. And no one is bothered by the electrically-charged wood railing of the staircase.

If you haven’t seen a frame of the original, its possible to guess what’s coming. Happy family moves into new house. Youngest child starts talking to herself or her weird dolls. One night as everyone sleeps weird stuff jumps off. Eventually the family contacts a group of paranormal investigators for help. Cut to crazy special effects. Its possible to take these now cliché’s (many created by the original Poltergeist) and do something unique with them or even usurp audience expectations and produce some truly chilling moments. But instead, the film faithfully—and to its own detriment—traces the seams of the original film without reproducing much tension or any sense of real jeopardy.

Hey Kids–thirty years ago, television was the center of family gatherings and didn’t run 24 hours a day. At night, stations shut down their transmitters and channels broadcast video ‘snow’ and noise until day break. The conceit behind the original film’s haunting made a weird electro-magnetic sense. Today not only is television different, but nearly all electronics are used differently. Once spooky activity begins, we watch the ghosts orderly stroll through all the new electronic inventions over the last 30 years in a kind of weird appliance commercial. Its not scary, just missing whimsical narration. In this film, the nearby power lines and skeletal looking transmitter towers are supposed to appear ominous instead of ubiquitous. The only 21st Century toy that gets creatively used is in the narrative here is a drone. Somewhere in that idea is a dope found footage Poltergeist remake, since I kinda like how it was incorporated. But the film arrives at dopey and advances no further.

There are some positives. You’ll want to pay extra attention to what goes on in Griffin’s room. His is the first character who thinks something is wrong with the house, and of course no one listens. What he endures in the night, though is more than what most adults could stand. Truthfully, I wasn’t moved by any of the actors. I thought Hollywood had an elementary school full of creepy/scary children. Little Madison here is sweet to the point of being cavity causing. I don’t buy her having or needing imaginary friends.

And perhaps that’s because the film doesn’t set up the ghosts or paranormal activity as, ahem, intelligent or real. In any of the aforementioned Paranormal Activity films, the unseen spirits were like characters. Inquisitive, rude, nonsensical, mean. Here, its as if the filmmakers haven’t seen episodes of Ghost Hunters or any genuinely spooky youtube videos. When the paranormal researchers appear, they have no more updated electronics than they did 30 years ago in the original. One researcher carries a camcorder during the house walk thru. Is that thing even on?

Whenever Poltergeist rhymes with 82’s original it does so awkwardly. Fans of that film will find a couple of effective jump scares here, but feel free to wait for its digital release. The now legendary set-pieces; the tree, the closet, the clowns are touched upon here as if we’re on a 50cent tour through the original. (though truth told, the toy clowns may be the high point) Those moments never feel genuine. For example, the famous line carried from the original, ‘this house is clean’, is kinda cleverly used until they literally bully a character into saying it. That moment is what the whole movie feels like. The reason given for the haunting itself is carried over verbatim from the original. But when this film explains Why, the Why sounds flippant and jokingly dismissed as fodder for dinner gossip. And yet another plot point is explained via a nonsensical drawing as if we, the audience, are slow children. Its the filmmakers themselves who need a few things carefully explained to them. During the film, I often found myself shaking my head ‘No’. The moral of the Poltergeist remake: If you dig holes for flowers you might find skeleton bones. Just replant them and hope for the best. 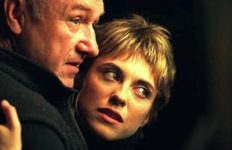 Year Of The Month – Heist→