Limbo opens with the kind of underplayed indie comedy style godfathered by Wes Anderson that made the word “twee” appear in film vernacular overnight without needing to provide a definition. The first scene plays out in 180-degree reverses of fussily composed shots, the vanishing point lower center of the frame. The scene, where a man and woman stiffly demonstrate a dance for a classroom of adult men and the male instructor’s handsy advances are met with a slap and a yell, is played deadpan with the class’s stony faces daring us to smile at the absurd presentation.

We soon learn the men in the classroom are refugees seeking asylum in Britain. They’ve been put up on a remote Scottish island for weeks going on months while the slow, unseen gears of bureaucracy decide what to do with them. Those twee indie trappings – the looping conversations, the precious wide shots, the bored postures and stretches of empty space – gain a new context and it’s interesting to consider the filmmaking approach against the usual subjects of this kind of cinematic ennui.

Omar (Amir El-Masry), a Syrian refugee with a cast on his arm, has been on the island for weeks already with no end in sight. His facial expression barely changes from an exhausted droop, making him a de facto straight man for the more colorful characters stranded with him. He’s brought his grandfather’s oud, an instrument he gained fame for playing in his homeland but that he hasn’t touched since his injury. He speaks to his parents from a remote pay phone (strongly recalling the one in Local Hero, maybe these are standard issue for remote Scottish isles) and these one-sided conversations fill in a life that seems barely connected to his day-to-day activities on the island. His brother has chosen to stay in Syria and fight, and tension grows with every call as the parents bring up both the brother and the musical career while Omar has little progress to report. The burden of the wasting talent and a fraught but unseen relationship recalls another indie favorite, Inside Llewyn Davis. Limbo gives space for a confrontation denied in that movie which provides a boost just when the movie starts flagging.

The rest of the cast reflect and refract Omar’s plight into basic components. Surreal absurdity in a chicken thief. Optimism in an oddly cheery friend. Futility in one compatriot with a dubious dream of playing pro soccer. Meanwhile the locals eye them with curiosity and hostility, waiting for the moment the exhausted men can be considered a threat.

Limbo‘s familiar visual vocabulary and sedated tone means stretches challenge instead of entertain. Considering what the framing and pace say about the refugee experience makes the challenge worthwhile. 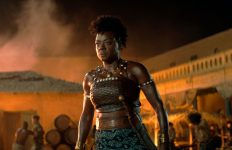 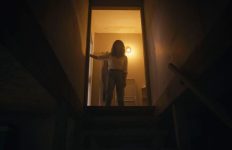 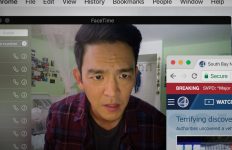