Browse: Home / SIFF Correction: Fourth Man Out is even more straight than before

Sometimes I get things wrong. Especially in the hectic hoopla of festival, sometimes I make mistakes. Probably more than sometimes, given the absolute number of movies I’ve seen, plus working, plus writing up things, and starting all over again.

Anyways, in my SIFF capsule for Fourth Man Out, I claimed that director Andrew Nackman was a gay voice behind the camera. He’s not. He’s also a heterosexual man. A publicist wanted me to make this correction, which is totally fair. Nackman made an introduction at the second screening at SIFF, but could not stay for the Q&A after the movie, and I had assumed from his 2 minute bit that he was homosexual. The publicist also notes that Evan Todd is still totally gay, helpfully adding that there were a variety of the gay characters, but only one of the three leads (three? there were four friends; maybe she’s considering Kate Flannery a lead?) was gay.

The problem this raises is this bit of information brings the debate about straight people making movies about homosexual culture to the forefront; one which I think needs to be delved into even more deeply than I did in my SIFF review. One of the biggest issues is the pervasive splintering of gay culture into even further subcultures, dictated by behaviors, body types, and gender adherence. One of the biggest discriminations within the gay subgroup is masculine vs feminine behavior, and how attitude preferences become dominant trends that create in-group discrimination.

Over a decade ago, I remember watching an episode of Blind Date – for you youngins, Blind Date was a dating show where two people would go on a multi-part blind date in LA to have a story crafted with editing and used graphics to point out the behavior foibles of one or both people – where they had a rare gay couple. They connected a tall masculine older man who had just gotten divorced from his wife, came out, and was rather butch in his attitude, with a young twinky femmy hyperactive boy. The boy, who might have been born without a closet, was a Gold Star gay, in that he had no female lovemaking experience, and regarded it as amusing that he was on a date with a former heterosexual. At the end of the date, Blind Date does a quick post-mortem Q&A, and I remember the older man saying “If I wanted to date girls, I’d have stayed married.”

In the 15-odd years since that date originally aired, the fight over masculinity in gay culture has only amplified, especially after blending with the heteronormative craze of gay marriage and adoption. I support gay marriage and adoption, but I echo the words John Waters said, “I remember the time when coming out as gay meant that your mother never asked you when you were getting married and having children.” I first heard him say that about the same time as that Blind Date episode. Since then, gay culture has been struggling to keep its identity separate from the heterosexual culture, but still wanting to be accepted by it. Gay culture has a push pull of wanting to be accepted and included, but not assimilated.

Mix that with the fight over masculine and feminine that is further exemplified in the struggle displayed in Do I Sound Gay?, a SIFF documentary made by Brooklyn journalist David Thorpe. Thorpe turned 40 and realized he was still single. On all the dating profiles, he was seeing “masc 4 masc” (aka masculine for masculine) and “no femmes.” You had to have a masculine persona, speak in a hetero voice (there is the proverbial “he opened his mouth and a purse fell out”), and do butch things like camping and kayaking. Being gay meant you were a man who wanted to do manly things, and had no time for those Barbara Streisand-loving sissies. Everything Thorpe talks about is rooted in certain levels of misogyny and internalized homophobia, but also in a backlash to the previously established gay culture.

Gay culture was built on the blood, sweat, and tears (literally in all three cases) of the gay men of yore who couldn’t pass as heterosexual. The arty, theatrical, operatic, feisty, bitchy, femmy guys who couldn’t help but be out, as well as the ones who simply had to be true to themselves. All the way back to The Boys in the Band, Emory is a flamboyant queen with a lisp whose behavior is assembled out of more feminine traits, and has built a shield for himself against the bullies who would mock him for it. Stonewall happened on the day of Judy Garland’s funeral. In the years since Ellen came out, making it OK for everybody to come out, there have been more and more men who were able to “pass” coming out and keeping their heterosexual preferences but also not participating in the gay culture.

To say that Fourth Man Out stumbled into this discussion over gay culture, heteronormativity, and masculine vs feminine, is to put it lightly. As gender fluidity is ramping up on one side, on the other is the strict alliances to masculine culture. Fourth Man Out, as written by a straight man and directed by another straight man, is about a 24-year-old man, Adam, who finally comes out of the closet to his other 24-year-old straight friends and still keeps hold of his masculine persona. This is a perfect example of the masc vs femme conversation, but this time being dictated by two straight dudes. Straight people are now hetsplaining their distaste for gay culture in movies about gay people.

As it stands, Fourth Man Out encourages gay men to participate in brotastic behavior in order to be accepted by other normal straight dudes. There’s room for dancing to crappy house music, but no room for any of the other subculture of gays: femmes, artists, outcasts, etc. It shouldn’t be any surprise that Fourth Man Out is relatively shitty to its one female character who freely has sex with a male character, but easy going on the girl who plays hard to get. Adam’s best friend, Chris, has a steady fuckbuddy relationship with a woman who eventually becomes a possessive demanding bitch who steals Chris’ car. But, the girl Chris chases who doesn’t sleep with him over the course of the film, is considered a better person because she has the self-respect to not sleep with Chris until she gets to know him better. Keep in mind that Chris was also sleeping with a woman he had no respect for, but Fourth Man Out doesn’t judge him for that.

I mention all this to emphasize the misogynistic roots of the masculine vs feminine argument. A movie steeped in “masc4masc; no femmes” is also quite demanding that women who respect themselves need to not sleep with men for weeks (or until marriage). That it was written and directed by two straight dudes leaves me to wonder about how much of our culture is being hijacked by our desires to “just be one of the guys.” Is heteronormativity something that we should strive for, or should we be at the mercy of our desires for masculine behaviors? Can we ever create a blending of the masculine and feminine that isn’t at odds with itself?

And, for any of my shitty behavior that I may have enacted in my youth that might have contributed to the “masc4masc” debate, and I know I did some of it in my journey, I apologize. 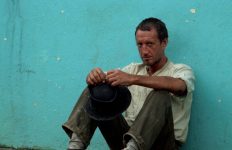