“Why doesn’t Batman use his vast wealth to fund social programs, feed and house the homeless, and otherwise solve Gotham’s social and economic issues?”

This is, by far, the most infuriating hot take that I will never, ever be able to escape from, and it comes from an impulse – or rather, a lack of an impulse – that is, itself, infuriatingly inescapable, especially in amateur criticism and especially in fandom. Much of what I do here is try and find the meaning behind an image; I look at the action presented in a story, and I ask ‘why did the character do what they did?’ and ‘why did the storyteller present the story in this way?’. I’ve had people remark that they find this kind of analysis ‘kills the magic’, but for me it’s the opposite – once I’ve figured out where the story is going, I can more properly immerse myself in its pleasures; once I figure out what a character wants, I can thrill in them trying to get it. The more comfortable I get with this process, the more maddening I find the literal-headedness people can bring to analysing fiction – I’ve complained before about people rating a Batman by whether he sticks to the image of him they have in their head, and this feels like a different flavour of that, refusing to see fiction as anything but a window into a world that works exactly – exactly – like our own. Batman is, famously, a malleable concept that many different storytellers have used to express many different ideas, but his plot devices remain fairly consistent: he’s a man who dresses up like a bat, drives around in a Batmobile, and fights crime. Sometimes the fact that he’s rich is used as cheap wish fulfillment, but it’s mainly used to justify why he has a big cool car, a lot of toys to fight crime with, and the time to beat up criminals at night. Strangely enough, ‘feed the homeless’ critics seem to grasp that asking why Superman can fly is missing the point of his character, because it’s just a plot device that allows the story to move, and yet they can’t apply that same logic to Batman being rich.

One of the major aspects of story criticism – and one of the most widely misunderstood – is the idea of the metaphor. Usually, it’s framed as ‘this thing in the story is a representation of this other, real thing’; what I learned from Bob Dylan is that not only do people get hung up on what is the One True Thing that each story is a metaphor for, they miss that something can be a metaphor for one thing one day and a metaphor for another thing the next day without missing a beat. To put it in Batman terms, not only can he be used by Tim Burton, Paul Dini, and Christopher Nolan to represent contradictory things, I watch The Dark Knight and decide it’s a parable about ruling a city, watch it another and decide it’s a reflection of my teenaged interests evolving as I’ve become an adult, and watch it a third and decide Batman and Joker’s relationship reminds me of the relationship I had with a tool I used to know and seeing the movie as how that could have gone, if I’d given in to different impulses. Another day I might even decide it’s a fascist, pseudo-intellectual power fantasy. This strikes me as unfashionable in the current strain of criticism (which, as we have complained about ad nauseum here at The Solute, is more about running everything through the Proper Moral Outlook and seeing if it checks all the right boxes) and downright unfathomable to the people I outlined in the first paragraph.

Stories aren’t journeys from their perspective, they’re a series of events hooked together. Perhaps this is why so much amateur criticism is based on nitpicking plot holes; they see the events are not properly hooked, and they’re thrown off. Perhaps this is why so much amateur criticism is over superficial details; there’s no abstraction or story in their head, only an image. Perhaps this is why so many shows and movies feel like rituals, playing over and over; these are the people looking for the same thing they’ve seen a thousand times before, because it’s not the story they want, it’s the images. This strikes me as a perfectly acceptable – even powerful – attitude for, like, a farmer or a miner or chef, but poisonous for storytelling, whether making it or consuming it. The Shield is ultimately just a series of events that logically connect together, but each moment is injected with a powerful sense of Story that sometimes crosses into the divine and does connect the whole show on a deeper level. I can even see the ways this attitude spills out into having terrible real life consequences – as I was writing this, beloved Soluter Conor Malcolm Crockford vented to me about policy wonks, who prize the memorisation of policies and statistics but have no clue of how to weave them into a coherent or productive ideology. To deny reality is dangerous, of course; to deny narrative is to deny a part of your own humanity. A human being knows that all Batman stories are about feeding the homeless. 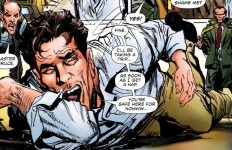 The Weirdest Batman Comic Book Stories of All Time: An Addendum, Part 2→ 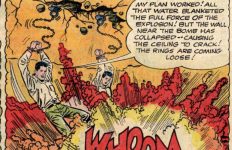 The Weirdest Batman Comic Book Stories of All Time: An Addendum, Part 1→ 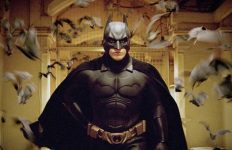 Film on the Internet: BATMAN BEGINS→