Browse: Home / Subscribing to an Idea

For those who continue to rebuff the data-mining, promise-breaking, Gotti-releasing service MoviePass only because it’s too expensive, you’re in luck. There’s a new bug-nuts scheme to give everybody free movies from MoviePass founder Stacy Spikes (whom I suggested should become the face of the company again; he instead left the company, which is a good template for handling any advice I give regarding MoviePass). This new service is called PreShow and it’s either a bargain or a dystopian nightmare or both. It’s likely… not both.

To use the service you simply 1) Select the (2D) movie you want to see. 2) Get a 15-20 minute video of “branded content” sent to your phone. 3) Watch the PreShow video. 4) Get a credit to your account good for a free movie ticket. Oh, and the app uses proprietary facial recognition software to make sure it’s you watching the ad in its entirety. The video pauses if you look away.

Concerns arise. Will this service actually attract enough advertisers to pay for all those movie tickets? (like MoviePass, exhibitors aren’t in on the game.) Will enough people think 20 compulsory minutes of commercial-watching is worth the price of a movie ticket? Keeping in mind they’ll be subjected to 20 more minutes of ads – er, branded content – if they arrive early to the theater? On a scale from 1 to Idiocracy, how concerned should we be about the concept of supervised commercial viewing time?

Over 1000 Kickstarter backers are not concerned. They’ve paid for the privilege of beta-testing this free service. I’m still busy siphoning funds from MoviePass so, as when Lasik surgery was introduced, I’m going to sit this one out until I’m reasonably certain nobody’s eyeballs will get melted. But I understand the impulse to sign up. Much of my thumping for MoviePass – until they revealed themselves to be morally (and probably soon literally) bankrupt – came from a desire to show support for the endangered theatrical experience. I subscribe because it reflects as aspect of movies I wanted to preserve.

I’m not the only Soluter who’s toyed with the new Criterion streaming service this week. Like the cautious son of a banker I am, I did a cost analysis. By signing up at the annual charter rate, I spend less than I would spend on 20 Blu-Ray rentals at the local hipster video store, my previous go-to for Criterions. So if I average two movies per month on the service, I’m saving money right?

Well, yes – were I actually renting two Criterions a month at the video store. Truth be told, that would be an uptick in my classic movie viewing habits of late. And I’m not taking into account the other options I have for some of these titles (library DVD or Kanopy for example). I had to admit to myself that many of my reasons for subscribing had to do with specific titles, genres and directors, but at least some of my reasons were aspirational. Subscribing will encourage me to dig into titles and artists that have long sat on my “I’ll get around to it” lists. And I’m optimistic the curation aspect will illuminate new areas to explore.

A glut of new streaming services will be starting this year. Not just Criterion (which is partially filling the hole left by the departure of FilmStruck) but Disney, Warner Brothers, DC Comics, the Discovery Channel and others will roll out subscription-based channels in 2019, accompanied by handwringing by cordcutters that they’re about to be resold cable piece by piece. But these pieces aren’t the same as the movies tier on a cable package. Some of them are getting personal. They’re chances to put your money where your eyes are. To confirm that, yeah, I’m into classics/horror/anime/Star Wars to the degree that putting money towards more of it will produce a personal net gain.

The flip side is, well, having to put money where your eyes are. If it costs ten extra dollars a month, how many nascent classic film fans will dial back their ambitions before they get started? What if the broad umbrellas of Netflix and Amazon become the de facto networks the way ABC/NBC/CBS once were. Will there someday be an entry fee to getting into movies?

I like theatrical and classic movie subscriptions because those are things I enjoy and want to support. I just hope the mechanisms that keep them going don’t push them farther away from the culture at large. 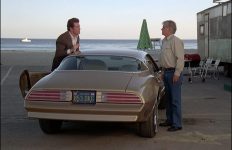