Browse: Home / The Friday Article Roundup: Just One of the Guys

This Week You Will Greet with a Curt Nod:

Thanks to these guys for contributing: Casper, Rosy Fingers, scb0212, and Ruck Cohlchez. Send articles throughout the next week to ploughmanplods [at] gmail, post articles from the previous week below for discussion, and Have a Happy Friday.

On the return of Kids in the Hall, two articles for the price of one! An interview with Mark Daniell has the Kids feeling “dangerous again,” and at Slate, Tabitha Vidaurri says what the show taught her about feminism:

The show’s most salient example of feminism also happens to be one of its most absurd characters: Cabbage Head, Bruce McCulloch’s cigar-smoking loudmouth. McCulloch says he came up with the idea when he noticed men hitting on his girlfriend in a way that tried to exploit her pity. Cabbage Head’s very first line is “So are you gonna sleep with me or what?” When he’s turned down, he becomes even more indignant: “It’s ’cause I have a cabbage for a head!” Each time Cabbage Head appears, he uses his ham-fisted manipulation in an attempt to get laid, whining excuses like “I had a bad childhood!” any time he’s criticized. Even worse, he pretends to be into “women’s lib” when he thinks it will work to his advantage. These days, we can label Cabbage Head’s attempts to guilt women into sleeping with him as toxic male fragility or even nice guy syndrome, but back then, he was simply an asshole.

A. A. Dowd takes to Rolling Stone to muse on the failure of auteurs to put their stamp on the MCU:

More than most of the filmmakers sucked into the grinding gears of the Marvel machine, Raimi finds ways to assert his oddball personality while still tending to the various franchise-progressing duties of the assignment. But in a way, the film’s relative singularity — its relative Raimi-ness — could leave fans of the director longing for a project that didn’t treat his contributions like an accent or a mere dollop of exotic flavor. The odd energetic camera move aside, Multiverse mostly looks like any other installment in this series; it has the same drab digital palette, the same green-screen VFX aesthetic, the same undistinguished stretch of downtown Manhattan. The vibrancy of Raimi’s Spider-Man movies is a distant memory.

Dominic Corry at Letterboxd Journal talks about the ahead-of-its-time hacking in Sneakers on its 30 anniversary:

In presenting its primary credits initially as anagrams, Sneakers conveyed a sense of nerdy playfulness that is maintained throughout the ridiculously entertaining film in both intention and execution. Anagrams show up again within the context of the story (try unscrambling Cootys Rat Semen!) and the overall mentality emphasizes scientific reasoning and intelligence alongside traditional big-screen derring-do. (The marketing team had fun, too: journalists received the press kit on a floppy disk containing a quasi-encrypted program.)

Is there a Time Bandits remake afoot in New Zealand? The Otago Daily Times reports:

Waititi has been widely reported as an executive producer, co-writer and director of the television series adaptation of the beloved 1981 Terry Gilliam-directed movie, which is in development at Apple. Game of Thrones star Peter Dinklage is also reported to have been offered the lead role in the series, which is expected to begin production in August before wrapping in early 2023.

Will Harris ends his run of Random Roles interviews with some Solute synergy, talking to the legendary John Astin about The Addams Family, guest starring on Briscoe County, Jr. and Batman and much more:

Batman came about because I got a call. I was at home, we had just finished The Addams Family, and they said, “Do you want to do the Riddler for a couple of episodes?” And I said, “Sure!” You know, I always had a fantasy of running around in my underwear. [Laughs.] And that was a chance to realize it…and get paid for it! Fortunately I’d been working out. There was a baseball player named Jim Lefebvre, and it was fun to see Jim there. He took a lot of ribbing from his teammates, saying, “The Riddler’s in better shape than you are, Jim!” Because he was wearing the underwear, too. But he was a very good hitter!

…oh and one more thing. Gwen Ihnat uses her final kiss-off at The AV Club to discuss the extended episode of Columbo with guest star John Cassavetes:

At some point during the production, likely due to this dynamite chemistry or the fact that it was the season opener, the decision was made to extend this 90-minute Columbo episode into a two-hour one. While you can spy the stretched-out seams at times, we must be grateful for scenes like the one where Columbo asks Alex how much he makes. I’m guessing that it’s one of the add-ons because Cassavetes’ hair is shorter than in other scenes; nevertheless, it is an out-and-out delight. Columbo is, conceivably, trying to figure out how wealthy Alex really is, looking for some sort of motive, asking questions like how much taxes he pays on his palatial property and then quickly computing the home’s worth. Alex becomes increasingly flustered as Columbo zeroes in with his questioning, eventually just coming out and asking the maestro how much he makes for a living. Throughout the scene, you can see Cassavetes hiding a not-so-tiny grin as he sees his friend embody the character that would make him famous, and doing it so, so well. 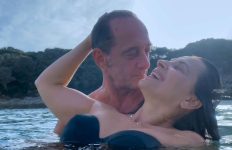