This Week You Will Show Affection for:

Bright Wall/Dark Room‘s Nathaniel Missildine goes long on the cerebral and the silly in LA Story:

All the allusions could have gone brainier and the jest a little too infinite, if not for a welcome distraction in the form of SanDeE* (Sarah Jessica Parker). She bounces and twirls through her scenes in what plays as both a New Age, aspiring spokesmodel from Venice Beach with a kooky spelling of her name, and an immortal, beaming sprite who’s dropped in from softer heavens. Pauline Kael covered L.A. Story in the New Yorker in her last-ever film review. The final line of that final piece of her career was about this character: “She’s the spirit of L.A.: she keeps saying yes.” SanDeE* is like Puck, a carefree link between the real world and the far-out, delighted by everything in the curious realm of humans she’s alighted upon.

Young filmmaker Brandon Towns takes to rogerebert.com to confess – I Think I Made a Bad Movie:

In my mind, “The Wolf Among Us” was going to be my claim to fame. The short was going to be my “Reservoir Dogs,” my “Blindspotting,” my “Sorry to Bother You.” I had mapped out my Sundance success story, being interviewed by IndieWire and No Film School as I explained the long four-year journey and raising $16k—the blood, sweat, and tears that went into the project. I envisioned telling John Cooper about taking a chance on first-time actors, awkwardly filming a car sex scene in my mama’s backyard, and the logistics of burying a body in the woods. But then I got the first cut and those ambitious dreams quickly receded like my hairline in college. As a filmmaker, you pour your soul into your movie. Late nights, maxed-out credit cards, and disappointed looks from your spouse all lead you to opening night. Among the crowd, you sit and hope that your film isn’t a pile of garbage. But sometimes it is. Filmmaking is a gamble. It takes the same amount of effort to make a good movie as it takes to make a bad movie.

At Mel Magazine, Robert Harmon talks to Tim Grierson about the bumpy ride toward getting The Hitcher made:

Short films tend to do only so much for a burgeoning director, but in the case of China Lake, it was enough to get him noticed. As Harmon remembers, “[Napier] dragged Jonathan Demme to a screening over at Warner Bros. It was great. It was really fun.” China Lake only played one festival — the prestigious Telluride Film Festival, in Colorado — but the response helped stoke interest. “We’d hardly shown it to anybody, and I was stunned by the reaction. The audience was, by my recollection, exactly bifurcated. People were on their feet, clapping and whistling — and other people were screaming and yelling. I very clearly remember a voice from the back of the theater: ‘Who admitted this piece of shit to the festival?’” Harmon smiles: “The answer to her question was her husband, who was on the board of admissions of the festival.”

Speaking of festivals, Geena Davis and Wendy Guerrero talk to Rebecca Sun at The Hollywood Reporter about programming a festival of underrepresented filmmakers in Bentonville, Arkansas (which will take place in person and virtually through the end of the month) and the new model of online presentations at festivals:

Guerrero: Filmmakers were nervous in the beginning to show their film in a hybrid environment because they didn’t have the confidence of the distributors and the understanding of, “Is this considered a premiere? Or is there some kind of contractual clause that I’m going to miss with my distribution if I show it at a festival online?” We did have a little bit of that to overcome in our first hybrid year, but I feel like now distributors are understanding that it is a different landscape and environment. Some films are choosing to only screen digitally and event-icizing it, making it like a one-time screening. So I think they have more options to showcase their film in the way it works for them. It’s all sort of open now. Maybe we’ll go back to the traditional ways, but I do feel like there’s more opportunity. Those old models are being broken.

Nuar Alsadir writes at The Paris Review about the embarrassment, the freedom, the physiology, and the spirituality of inappropriate spontaneous laughter:

The British call convulsive laughter corpsing, a term that derives from the frequency with which a fit of laughter overtakes an actor playing a corpse onstage. Before breaking into laughter during my talk, I was, in a sense, playing dead, if you think of dead as assuming a socialized self, pushing your emotions and spontaneous feelings underground. [..] Most often, we don’t select the roles we find ourselves playing in daily life; as we move through the world, we are drawn into social scripts, texts that govern interactions we are trained to reprise without conscious recognition. Breaking character is a refusal to become an instrument in the production of a system that is, for the most part, invisible and indifferent to us. When we cease to blend into the social world around us, the “chain of daily gestures is broken,” writes Camus, and what follows is an “awakening.” 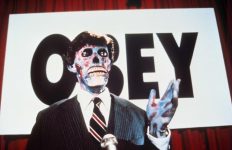 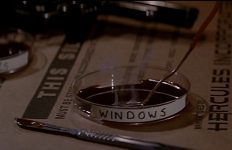 Year of the Month: Sunil Patel on THE THING→