Browse: Home / The Risk of Facades in THE FADE OUT #2

“The funeral is a small affair, but it still feels fake to Charlie. He looks around and can’t tell whose grief is real and who may be putting on a show in case the press is watching.”

Cities are built for a purpose, and in the case of Hollywood, California, that purpose was making movies. Filmmakers wanted to take advantage of the wide open spaces and copious sunshine, and so claimed a space in the Southern California sandbox to do just that. “The Dream Factory” was an early name for it, which is almost right. Hollywood is pure Id, a collection of urges, needs, and desires that turns the city into a writhing mess of contradictory extremes. It’s a creative mecca that’s out of ideas; a desirable destination and a fatal dead end; a place where you’re free to reinvent yourself, but you could get lost in the process.

It worked out successfully for studio head Victor Thursby, who came to Los Angeles thirty-five years ago as Noah Feldberg, working his way up from delivering film prints to theaters. It’s also temporarily working for our protagonist Charlie, who hasn’t been able to write since coming back from the war, but gets writing jobs and dictates what his blacklisted friend Gil comes up with. It’s also currently working for Morty, whose bandaged face stares you down on the front cover. Morty is a bit player doing body double work for the studio’s big leading man, Earl Rath, on the ill-fated Valeria Sommers project because Rath’s ego won’t allow him to spend days on end hiding anonymously behind a mask of bandages.

Unfortunately, poor murdered Valeria Sommers fell victim to that reinvention, who even in death is being molded and changed to fulfill the whims of the living. Her murder was transformed into a suicide to protect someone on the lot. She’ll be replaced and erased from the last movie she ever worked on by reshoots, her death used as an excuse by the director to take an artistic gamble on a story he doesn’t like. She’s even buried under her stage name, her actual moniker (Jenny Summers) lost but to the few who knew her. Even Charlie is using her, telling his best friend Gil the truth about what happened because of a desperate need to feel in charge of a life that has begun to spin out of control.

And it’s not just Charlie’s life, but all of Hollywood that’s going to come flying off the rails at any moment. Gil’s alcoholism has started pushing his wife away and dangerously close to Charlie. The German director Franz has been given two weeks to reshoot Valeria’s scenes, and decides he wants to reshoot the entire movie, willing to push an already distressed cast and crew in the service of his ego. All of this under the final days of the Studio System, as the Supreme Court ruled against vertical integration, and Howard Hughes has reportedly volunteered to sever RKO’s distribution arm. Brubaker forecasts a major shake-up coming, and who knows what will come loose when it hits.

Sean Phillips’ art is always great, but there are a few panels in particular that deserve special mention. The first comes from a scene set in a screening room, where Thursby, Franz, and Charlie watch Valeria’s last set of dailies. After Franz and Charlie are dismissed, Thursby is standing at the screen. It’s the last panel of the page, taking up the entire bottom row. Valeria is on the screen in a full-frame close up and Thursby stands next to her, caressing her face and murmuring something we can’t hear/read. That’s a powerful image already, with the full-color Thursby reaching out for the black and white Valeria, but on top of that the panel is drawn from slightly below. Valeria’s face is stretched wide and Thursby looks imposing standing over the reader, even as his actions are very vulnerable and tender. 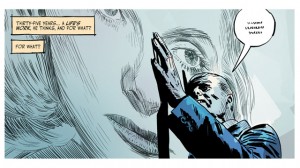 The other interesting set of panels is a fist fight between Gil and Charlie in the cemetery, in front of Valeria’s grave. There’s a top row of thin panels setting up the explosion to come, and then Gil attacks Charlie, screaming obscenities. The action in these panels is all very kinetic, the “camera” at different angles and the background violent shades of red, yet the presentation is very ordered and precise. The fight happens over the course of four panels equally sized panels, two rows of two, and the sound effects are all typed, and nested neatly in the top left hand corner. Typically panels for fight scenes are unconventionally shaped and messy to match the chaos of a fight, so the mathematical equality of the panels and the matt-of-fact sound effects have an unnerving effect. It gives the impression that this is somehow planned and anticipated. That even though Charlie didn’t kill Valeria that he’s a rotten enough guy to do some terrible things. 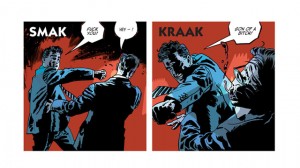 To quote the final film Valeria Sommers ever appeared in: “The real trouble hasn’t even started yet.” 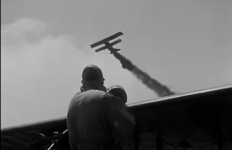 Hell’s Angels (Year Of The Month)→ 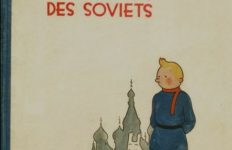